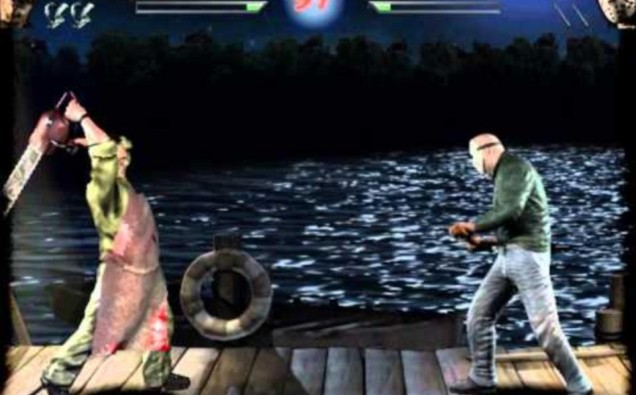 You know, that upcoming Summer Camp game was already looking pretty awesome. And then they officially made it a Friday the 13th game… There simply are not words for how excited I am for this! Literally, I am officially less excited for Fallout 4 coming out this year than I am for Friday the 13th coming out in about 12 months. But how to feed that Jason Voorhees video game craving in the mean time? Well, let’s look at the options we already have.

This poorly rated first foray into into the video game world featured you trying to kill Jason (before he kills you!) at a summer camp (I guess?). It’s horribly generic and Jason really doesn’t even look like Jason. But, hey, we all have to start somewhere. Interestingly, this game came out during the period of time when Jason was still dead, 1985 being the same year as the release of Friday the 13th Part V: A New Beginning, featuring the copycat killer, Roy Burns. It was not until 1986’s Friday the 13th Part VI: Jason Lives that Jason came back as the nigh unstoppable zombie we all know and love.

It seems that both of the first two Jason games coincided with the releases of very lackluster films in the franchise being released the same year. As the first coincided with the much derided and basically ignored A New Beginning, this next attempt (heralded as one of the worst games for NES) came out the same year as Friday the 13th Part VIII: Jason Takes Manhattan aka the F13 film that sucked so much that Paramount finally gave up and sold the rights to New Line in its wake.

This game is awkward… You switch between side scrolling when outside and first person view when you enter a cabin. All the while fighting basically every generic horror enemy you can think of. Bats, skeletons, etc. Similar to the first game, this one was very poorly received.

This game is amazing. A pure project of passion, Terrordrome is a fighting game featuring all of your favorite slasher characters. It was made as a hobby as a fan project and can be downloaded for free. The year range is due to the fact that the game has been available through different stages of Beta through the years, finally reaching a finalized form in 2013.

You can actually play as two different Jasons in this, both Classic and Undead. And these aren’t just different skins. These are two distinct characters with very different fighting styles. Classic Jason has a fighting systems where he can switch out his weapons on the fly, representing all the different tools he used in the films. Undead Jason is a straight up powerhouse. Aside from the two Jasons, you can also play as Leatherface, Freddy Krueger, Chucky, Tallman, Ash Williams, Michael Myers, Maniac Cop, Ghostface, Candy Man, Herbert West, Pinhead, and Pumpkinhead. You can download the game for free here: http://terrordrome-thegame.com/
And check out my interview with the game’s creator here: http://www.theblood-shed.com/interview-with-marc-echave

The latest in the classic fighting game series, having featured Freddy Krueger in its previous installment, added Jason as a DLC character. His moveset is as brutal as one would expect considering the source and game.

And now, next year we get the insanely awesome looking Friday the 13th (2016) for PS4, Xbox One, and PC. Take a look at the official trailer below! Jason hasn’t had the best luck with video games. But, hell, all the Batman games sucked before the Arkham series. Are we about to see Jason’s own equivalent to Arkham Asylum?