#31 Days of Halloween the Movie Review: A Spooktacular Documentary 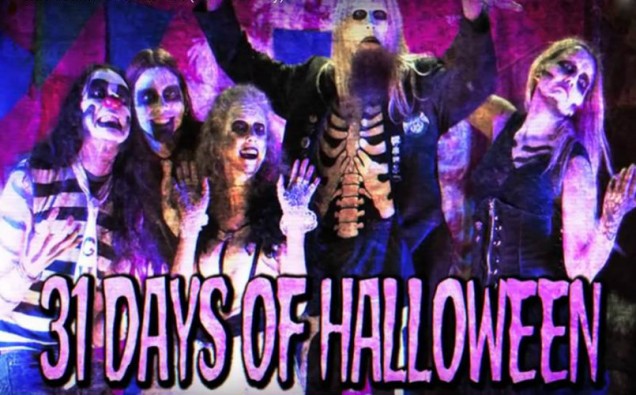 Written & directed by: Robert Alcala (aka Ghoul the Hectic Clownie) 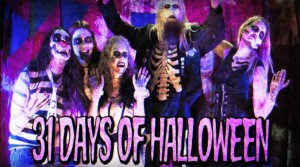 When summertime ends and the air chills, it means that All Hallows’ Eve is near. Along with watching horror movies, many have a ghoulish good time by attending haunted houses and attractions across the country. This experience and excitement is captured by musician and YouTube blogger, Ghoul the Hectic Clownie, in his documentary #31 Days of Halloween the Movie.

Recorded on a handheld camera, Robert Alcala, better known as Ghoul the Hectic Clownie (who will be referred to as Ghoul during this review), captures his Halloween fun every day during the month of October. Typically in full clown face makeup, Ghoul visits Universal’s Halloween Horror Nights, Knott’s Scary Farm, Los Angeles Haunted Hayride, a zombie walk, and much more. Each day has a voice over introduction by Ghoul and a few interludes include classic spooky tales read by the film’s host.

Ghoul is a drummer for two bands, both of which are featured throughout the documentary. In many in 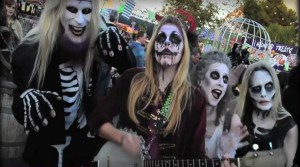 stances, The Rhythm Coffin is performing at the locations Ghoul is filming. The band is self-described as Monster Rock and performs original Gothic and horror themed songs, such as “Graveyard Boulevard,” “Headless Head Bop” and “Brains Brains.” They put on a very entertaining and elaborate show, complete with makeup and costumes. Ghoul’s other band, Dr Velvet and the Social Drinkers, is a Rock/Punk band that is often shown in a more serious and moody setting. Along with other bands, music from Dr Velvet and the Social Drinkers and The Rhythm Coffin provides the soundtrack as well.

Although it would be easy for one to 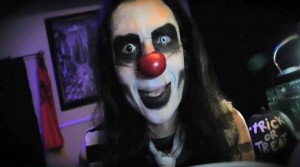 get bored during a film such as this, Ghoul has quite a charismatic personality and handles the often one-man show well. While the documentary may not find a broad audience, #31 Days of Halloween the Movie is an entertaining tribute to the holiday horror fans hold near and dear to their hearts. 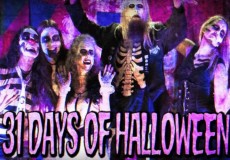