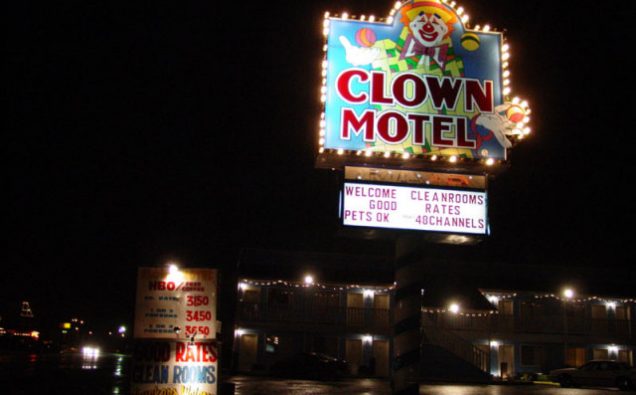 Now that school is almost out, it’s time for families and friends to plan their summer road trips. In 2016 I traveled to a couple of well known motels, just because they had haunted reputations. The Clown Motel in Nevada and The Stanley Hotel in Colorado were pretty cool destinations, to just feel some creepy vibes. (I keep waiting for a Clown Motel movie- isn’t someone making one?) After recently looking at my vacation photos, I thought it would be fun to make a list of my personal favorite sort-of obscure Hotel/Motel horror flicks. Something to get you, my horror fiends, in the mood for a vacation. Sleep tight, but don’t let anything bite!

I am purposely not including any #1 mainstream favorites. Horror fans have all seen Psycho, The Shining, 1408, Vacancy, The Devil’s Rejects and Hostel. These are all horror hotel classics! If you missed any of those, go watch them right now- or you are not a true horror fan, just sayin’. For this list, I’m picking a few of the more obscure or old horror flicks where people literally had vacations from hell. These are some of the movies that should have made us all never want to stay at a hotel again. Yet that isn’t the case….. is it? I guess we are all just brave travelers, or are we just as stupid as the folks in the films. Who knows?

Young Cheryl moves into her estranged Aunt Martha’s rundown King Edward Hotel on Skid Row. This twisted dark comedy chronicles the exploits of a teenage runaway who ends up staying at her aunt’s hotel. Everyone there seems to be a pervert in one way or another, and when murders start occurring, the girl realizes that she is in over her head. One of its offbeat residents, a disturbed photographer named George, takes special creepy interest in her.

Eaten Alive is a crazy, frantic film that quite possibly put the word cheesy in our film vocabulary. Tobe Hooper (Texas Chainsaw Massacre) introduces us to a psychotic redneck who owns a dilapidated hotel in rural East Texas. Judd kills people who upset him or his business, and he feeds their bodies to a large crocodile that he keeps as a pet in the swamp beside his hotel. I love it for what it is (and it’s not great film-making or acting) and enjoyed seeing it remastered and re-released on Blu ray.

This is the kind movie that can make you feel a bit weird and dirty after watching it. Klaus Kinski is a really creepy guy! You truly believe he is the sicko Karl, who he plays. What worked for me is all the crazy torture contraptions. He’s the MacGyver of horror! The story is about a man who runs an apartment house for women. He is the demented son of a Nazi surgeon who has the house equipped with secret passageways, hidden rooms and torture and murder devices. Kinda says it all.

After several years in an insane asylum, Evelyn, the keeper of the Mountaintop Motel, is released and resumes doing business. She kills her young charge out of anger, but convinces the police it was an accident – and pushed into insanity, she then proceeds to target her guests, first by releasing vermin into their rooms, but then by using her trusty sickle. I feel this needs to be on this list. The 80’s had an interesting and campy way with horror.

Prom Night is a pretty regular stalker/slasher film. Not one that I saw when it came out, I have watched since and didn’t hate it. What’s it about? Three years ago, Donna watched in horror as an obsessed predator murdered her family. Tonight is her senior prom and what Donna doesn’t know is that the deranged psychopath has escaped from the asylum. He’s returned to hunt her down, intent on killing anyone who gets in his way. So, the question becomes not who will be prom queen, but who will survive the killer’s rampage. If you hate lots of screaming girls, you may want to pass, but it’s not the worst of this genre I’ve seen. Maybe don’t see it right before you or your child goes to prom at a big fancy hotel!

The Innkeepers is a terrific film. Full of suspense and some really creepy moments. The Innkeepers brings us a ghostly thriller about the final days at the Yankee Pedlar Inn, where two employees determined to reveal the hotel’s haunted past, begin to experience disturbing and super scary events as old guests check in for a stay. Sarah Paxton is great in this paranormal story filmed in the supposedly really haunted Yankee Pedlar Inn in Conn.

I realize that Identity is not completely obscure, but I am always amazed how many people I talk to that have not seen this 2003 thriller. Two intersecting stories, and a few false endings, leave you hanging until the end. Boasting a great cast, including John Cusack, Ray Liotta and Amanda Peet, Identity is a must see motel movie!

I found No Tell Motel by accident on YouTube. It didn’t get great reviews, but I found myself liking it anyway. Full of many standardized horror tropes, this movie still made me jump, had a lot of originality and really decent acting. The characters are fairly believable, except when a friend dies, they seem to get over it pretty fast. I do suggest you check this one out though, it’s free on YouTube.

Motel Hell is what you see when you look up B Movie in the dictionary. LOL Funny and campy with a special garden all it’s own, Motel Hell owners Ida and Vincent treat their guests in a very interesting and terrifying way! Don’t forget to try the fritters. Check in to this motel and you’ll wish they would let you check out. A great movie? Maybe not, but I love it anyway.

Any movies I forgot? Let me know in the comments!