"There are some places in the universe you don't go alone" 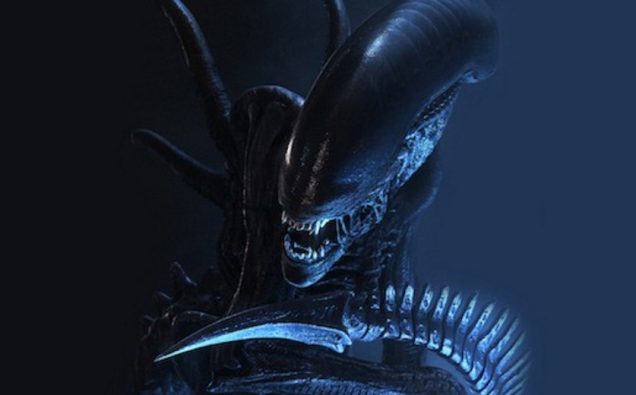 LV-426, the planet discovered in the original “Alien” (1979), has been colonised by mining families, men, women and children, but soon all contact is lost. Space marines are sent to investigate, carrying with them impressive firepower, but will it be enough?

Fifty seven years after Lt Ellen Ripley (Sigourney Weaver) survived her ordeal against an alien creature that had destroyed her fellow crew members of the Nostromo towing vessel, her escape vessel is found adrift by a salvage team while she sleeps in cryogenic status. Back on Earth, at an inquest over the fate of her crew mates, nobody is prepared to believe her story of extra-terrestrial beings, and it is revealed that LV-426 has been colonised by families for years. After the “Company” orders the colony on LV-426 to investigate, however, all communication with the colony is lost. The Company enlists Ripley to aid a team of tough, rugged space marines on a rescue mission to the now partially terraformed planet to find out what has happened to the colony, and to search for survivors. As the mission unfolds, Ripley is forced to come to grips with her worst nightmare, but even as she does, she finds that the worst is yet to come.

Aliens, the first sequel to the 1979 sci-fi horror film “Alien” (Ridley Scott), celebrates its 30th anniversary this year, and yours truly will be at the Lido cinema in Melbourne, Australia on Tuesday night for the anniversary screening.
30 years ago I skipped school for a full week (we don’t suggest you do this, kids) and went to cinemas every day to see this film. It was an amazing movie, way ahead of its time. Looking back at the movie now, the technology was impressive then and still is today. As a filmmaker I have watched Aliens over and over again, and am still blown away by the special effects utilized. Recalling one particular scene, where Ripley and the space marines are waiting for the dropship to collect them from outside the colony base, we witness the dropship crash because one of the xenomorphs has managed to get on board and destroy both the crew member in the back, and the pilot. It was never noticeable, but the dropship crashing was in fact a projection on a cyclorama.

Aliens was filmed in 1986, written and directed by James Cameron (“Terminator”) and was produced by Cameron’s wife at the time, Gale Hurd. Sigourney Weaver reprised her role as Ellen Ripley, and was joined by actors Carrie Henn, Michael Biehn, Paul Reiser, Lance Henriksen, William Hope, and Bill Paxton. The producers of the original Alien, Brandywine Productions, helmed by Gordon Carroll, David Giler and Walter Hill, were executive producers for Aliens. They were interested in a follow-up to Alien as soon as its 1979 release, but the new management at 20th Century Fox postponed those plans until 1983. That year Brandywine picked Cameron to write after reading his script for The Terminator. When that film became a hit in 1984, Fox greenlit Aliens with Cameron as director and a budget of approximately $18 million (US). The script was written with a war film tone to contrast the horror motifs of the original Alien. It was filmed in England at Pinewood Studios and at a decommissioned power plant in Acton, London.

As with many productions, aliens was plagued by in-house fighting. Cameron, bound by a low budget ($18 million US) and a deadline (ten months), found it difficult to adjust to what Paxton called the “really indentured” working practices of the British crew, such as the tea breaks that brought production to a halt.
The crew were admirers of Ridley Scott, and many of them believed Cameron was too young and inexperienced to direct, despite Cameron’s attempts to show them his previous film, The Terminator, which had not yet been released in the UK.
The crew mocked producer Gale Anne Hurd, insisting that she was only receiving the producer credit because she was married to Cameron.
Cameron clashed with the original director of photography, Dick Bush, when Bush started production saying the schedule couldn’t be met, and when he insisted on lighting the Alien nest set brightly; Cameron insisted on a dark, foreboding nest, relying on the lights from the Marines’ armor. After Bush was fired, the crew walked out. Hurd managed to coax the team back to work and Adrian Biddle was hired as Bush’s replacement.

Aliens was nominated for seven Academy Awards, including Best Music, Best Sound, Best Film Editing, and Best Art Direction/Set Decoration. It won two awards for Sound Effects Editing and Visual Effects. Sigourney Weaver received her first Academy Award nomination for Best Actress, and although she did not win, it was considered a landmark nomination for an actress to be considered for a science fiction/horror film, a genre which was given little recognition by the Academy of Motion Picture arts and Sciences in 1986.

Aliens was named in Time Magazine’s “Best of ’86 List”.

Entertainment Weekly, in 2007, named Aliens the second best action movie of all time (seconded only by “Die Hard”).

In 2004, Aliens was among Bravo’s top 100 scariest movie moments, while Alien (1979) ranked second for the chestburster scene.

First released on VHS in 1987, Aliens finished as the tenth best-selling title of the year. (17 minutes of previously edited footage was included for the special edition release in 1992.

If you are new to the alien franchise, I highly recommend watching the films in order, starting with “Alien” (1979), “Aliens” (1986), “Alien 3” (1992), and “Alien Resurrection” (1997). The film “Prometheus” (2012) is a loose prequel to the original “Alien”, which attempts to create an origin of the xenomorphs, and the soon to be released “Alien: Covenant” (2017) promises to expand on that prequel and direct the story back towards the original “Alien”. Two other movies, “Alien Vs. Predator” (2004) and “AVP: Requiem” (2007) bring the xenomorphs to Earth, in loosely attached, stand alone films which are still worth watching as part of the Alien universe.