Fans of Amy Bruni and Adam Berry from Syfy’s Ghost Hunters, may be a little surprised that their new series on TLC , Kindred Spirits, doesn’t start out super... 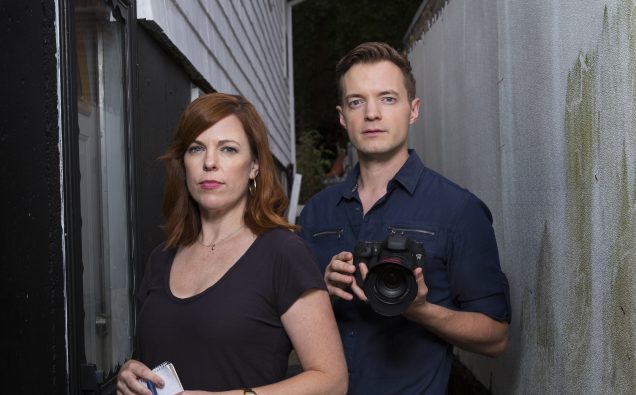 Fans of Amy Bruni and Adam Berry from Syfy’s Ghost Hunters, may be a little surprised that their new series on TLC , Kindred Spirits, doesn’t start out super scary. The pilot, which airs this Friday on TLC, is more than just a ghost hunt this time. According to Amy, the show will focus on meeting with families that believe they are experiencing paranormal activity, and feel it may be their own deceased loved ones doing the haunting. The goal for the duo is to help the living find out who the ghosts really are, what they want, and help the dead rest in peace. (Sorry to use a cliché, but it fits) I got a chance to watch the first episode and though there was very little ghostly activity recorded, I did get the feeling the family was helped, and that there truly was something paranormal going on at the location, even if we didn’t see much. It was a very emotional episode for everyone. 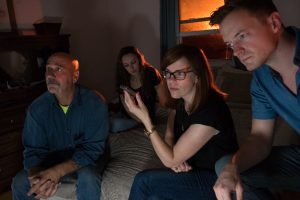 What is cool about the show is that it is not just about using the ghost hunting gizmos to find out what’s going on. Amy and Adam go to the local libraries and talk to the local residents themselves, to get as much history on the home that is haunted and the pasts of the families they are trying to help.

With the American Horror Story series doing a season about reality TV and ghosts, I think this real-life series will do well and cross viewers over from the horror genre. The first episode of Kindred Spirits was filmed in a small town in Pennsylvania. The family was having their own real American horror experience, full of broken lights, scary noises and things waking them up at night. And just like the fictional TV show, they also had a ghostly person watching them from the nearby forest. After seeing the episode, I felt like I needed to get more information from Amy herself and she was nice enough to find time in her busy schedule to do an interview.

Los Angeles Zombie Girl: I heard you grew up in a haunted house. Can you tell me a little about that?

Amy Bruni: “For a few years as a young child, my family rented a small WW2 era bungalow in Alameda, CA. Paranormal happenings were a regular occurrence there. From things moving on their own, to full bodied apparitions. My parents always acted like it was totally normal, so I was never taught to be afraid of ghosts. It wasn’t until I brought it up to kids at school that I learned other people thought ghosts were scary. And clearly, I instantly became the weird kid, ha, ha.”

LAZG: When did you first know that paranormal investigation was your life’s calling? And why do you feel it is?

AB: “Years ago, Adam and I were investigating Waverly Hills. We were communicating with what we believed to be ghosts of past nurses in the nurses wing. We were the first people to ever investigate that area and they were clearly very eager to talk and for hours, communicated with us via knocks. We were getting such clear, distinct answers and at one point, they even asked us to pray for them. As we left, they knocked the walls next to us, desperate to still keep talking. The guilt that I felt as I walked out of that building, with no further answers for them, and with no way to help them other than let them know I knew they were there was a lot for me. I knew then that I wanted to be able to assist not only live people looking for answers, but the “ghosts” themselves.”

LAZG: Can you tell me a little about your switch from Ghost Hunters to Kindred Spirits: Why a new show?

AB: “When I left Ghost Hunters, it was never my intention to jump into another TV endeavor. I left purely because I wanted to spend more time at home with my daughter and focus on my paranormal travel business, Strange Escapes. I needed a schedule that was more predictable. Now, with Kindred Spirits, being an executive producer has given me the control over the locations and schedule, so I can be close to home. As far as the investigative style, it’s very different in the sense that our investigations span several days and involve intense investigations, research, interviews and most importantly, a resolution of some sort. We don’t just say, “yes this is haunted” and leave. We try to make peace with whatever is there and give these families answers as to why they are being haunted, who is haunting them and then educate them on how they can appease or deal with the haunting. It’s also intensely emotional. We become so close with these families and since they all believe they are being haunted by a close family member, they have a tie to their ghosts that can be a very emotional one.”

LAZG: Why did having a daughter make you want to go back to helping families?

AB: “The bond I feel with Charlotte is unlike anything I have ever experienced. When I think of the closeness of families and envision how scared they must be when they feel what they hold dearest is threatened by an unseen force they don’t understand, I want to help. Especially since in most cases, ghosts aren’t dangerous at all.”

LAZG: How do you decide which cases to take on for the show?

AB: “We look to help families who are desperate. These are people who have been tormented, confused and terrified for years, decades in some instances, and who need help.”

LAZG: When you do the research, are there ever people who do not want to help you?

AB: “Absolutely. And I don’t blame them. The hardest thing we ever have to do is try to contact perhaps the family of a former owner of a home who has passed…and ask them questions. Many times, they want nothing to do with it. Those are our toughest calls to make. We realize though that not everyone believes in what we do and we definitely don’t want to force it on anyone. So we try to handle those calls in the most respectful ways possible.”

LAZG: Can you tell me about Strange Escapes? Sounds like my kind of vacation! When did it start, how is it doing, how do you pick the locations, are you contacting spirits on the trips, who goes on the trips?

AB: “I love travel and I love ghosts. In all my adventures, I’ve learned many others share those loves and there are some truly beautiful locations around the country that are haunted and historical. Strange Escapes gives people the opportunity to vacation in these places with other likeminded folks, all while listening to lectures by paranormal researchers, partaking in actual investigations, taking tours, etc. It’s so much fun!”

LAZG: Anything else about you or Kindred Spirits you can tell me?

AB: “I can’t imagine doing this project with anyone other than Adam Berry. I think it’s so important for the world to see that we are really like family ourselves, kindred spirits really. He’s been a great partner in all this and I can’t wait for people to see how our kooky friendship resonates on screen.”