Forgiveness for Some, Bullets for the Rest 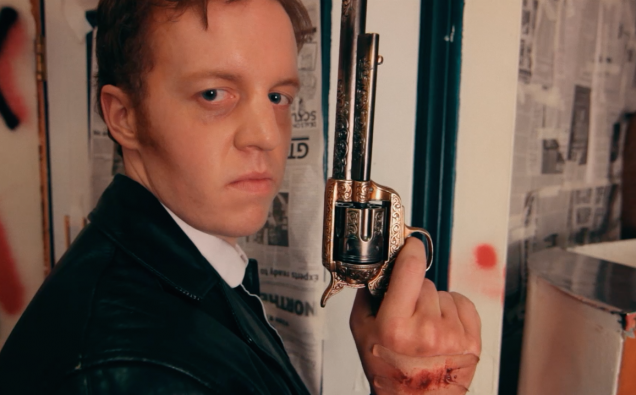 I watch a lot of movies doing this job, and as everything does should you do it enough, it does at times get ungodly repetitive. That’s why I love it when movies like Holy Hell come out of nowhere and smack me out of complacency. A winner of The Blood Shed’s own prestigious Golden Rake, Hell follows a pissed off priest, trannies with chainsaws, and more bullets than you can shake a 44 Magnum at. I was recently lucky enough to sit down with writer/director Ryan LaPlante; here’s what he had to say about the most offensive thing (movie or otherwise) to come out of Canada in a long time. 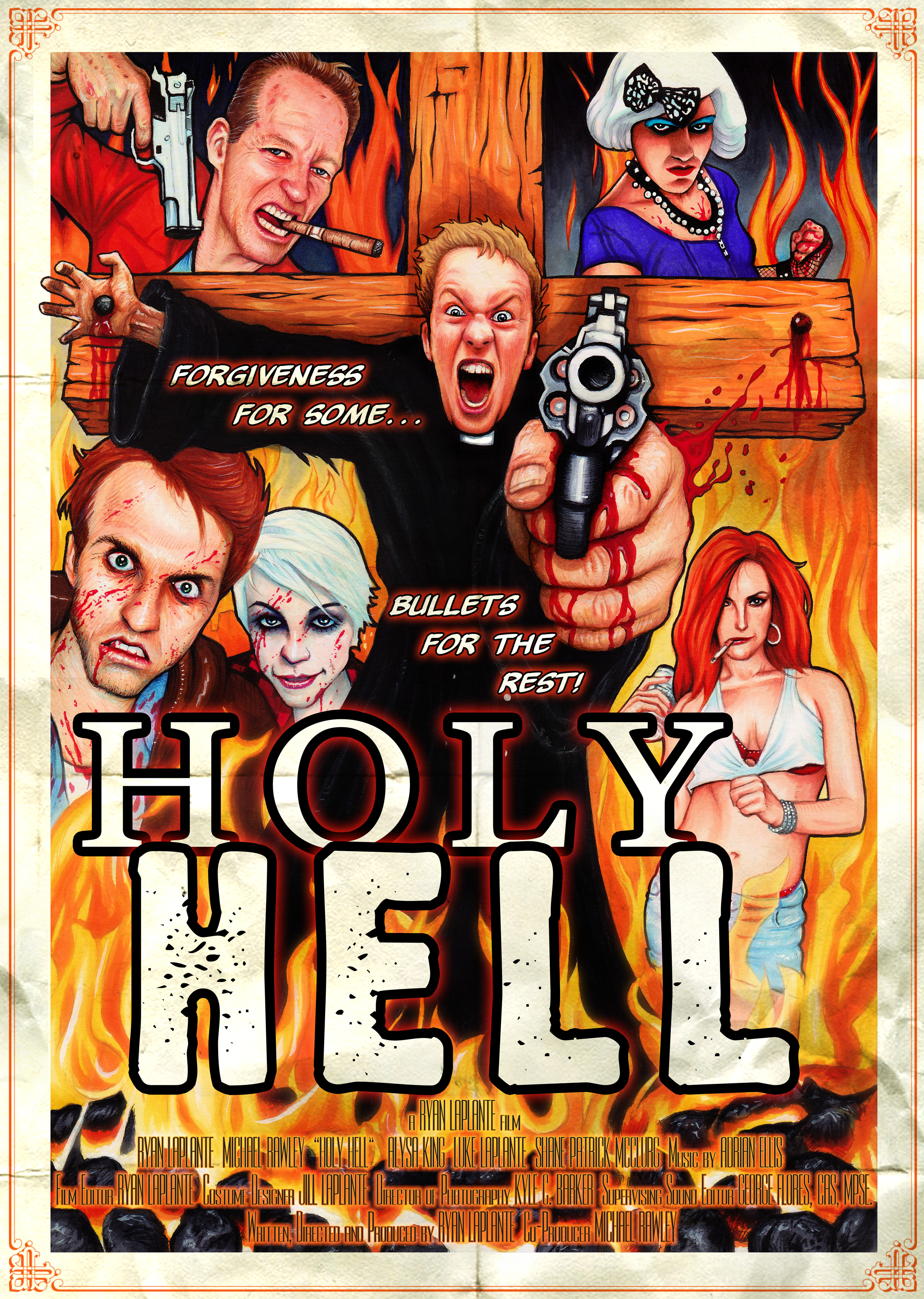 The Blood Shed: Well thank you for joining me Mr. LaPlante.

Ryan LaPlante: Well thank you for having me.

Shed: Before I get down to any questions, I just have to say, your movie really kicked ass.

Ryan: Aw amazing, good. Ill quote you on that one.

Shed: So what inspired you to do Holy Hell, this just politically incorrect, raunchy film?

Ryan: Well it all started when I was a theater director. I still do it occasionally, but I was directing this stage musical Rent, which I love, but it’s all very personal, and sensitive, and honest and when that show went up, I just wanted to write the most horrifically offensive, tasteless, awful thing I could. So I sat down and wrote the first draft of Holy Hell in three days of furious craziness.

Shed: How long would you say it took you to get the final draft nailed down? The writing was surprisingly complex in its simplicity, if that makes sense.

Ryan: Yeah yeah, no no,  I follow you. Well that first draft I wrote furiously quickly, and then it kind of bounced around, on and off with occasional work for about a year and a half. I did some table reads with actors, and kindve nailed it down where I wanted it. And talking about shooting as well, production itself probably streatched out over 8 or 9 months. It wasn’t consistent, it was just weekends, dealing with peoples schedules when they were available, so it was probably a 20 or 22 day shoot.

Shed: (Laughs) Yeah, the traditional Indie Budget. Have to get in there on those weekends.

Ryan: Yeah exactly, so everyone else can keep their day jobs.

Ryan: Yes, it was. The film itself was originally self funded by Micheal Rowley who plays Dokes Macfarland the villain. For the most part it just involved talking to credit card companies and telling them numbers they liked. But once we had the feature, it kind of let us bounce around and bring on producers for post production, which was our big push. It was tricky before since we didn’t have a track record, but once we could show people the film, then they seemed pretty enthusiastic to jump on board.

Shed: You obviously had a big hand in Holy Hell, doing just about every role. At what point did you know you wanted to produce, write, direct, and star?

Ryan: I always knew, like writing and directing was definitely the way I had to go. I was excited to kind of try it and shift things forward; originally I had planned on playing a smaller role in the film, maybe Officer Blank or one of those roles, and I realized due to the flexibility, or inflexibility, of everyone’s schedules the only person I knew would be on set everyday was me (laughs). So the priest became the role to play, because we needed that character almost everyday on set.

Shed: So the film is satirical towards religion, although I wouldn’t say it takes a firm stance against it. What would be your feelings towards m0re traditional, less blood soaked Catholicism.

Ryan: Yeah, I was raised Catholic, and I would say I’m probably a nonpracticing Catholic or agnostic? I don’t know, hard to define that, but yeah, the film itself doesn’t really have that much of a stance on religion. We play on the puns and the characters, we have some very tasteless fun with the priest. But religion itself, I think it can do great things, it can do not so great things. It really comes down to whose practicing and what their practicing for. I mean, I don’t want to get to preachy, I’m talking about a movie where a priest shoots people in the head. But you know, any religion based on compassion is a good thing.

I think my favorite part of the film, while I did love a lot of it, had to be the dialogue. Just a few the quotes that had me dying were “Jesus loves you. I think your a cock sucking scumbag” and “Well fuck me up the ass and call me a slut.” Holy Hell was just full of them. Something I love about these lines is how while, they are over the top, they seem exactly like what these characters would say in their respective situations. How did you come up with dialogue like that?

Ryan: (Laughs) Well I have a background as an improviser, and a sketch comedian, and I’ve written plays. But mainly it was just trying to think of, of like the worst things these characters could say (laughs).  I’ve got a twisted mind, and I really go to unleash it. And on re-writing it, I always had the opportunity to think of a better joke, or more and more disgusting ways to say things, which is a pretty fun process.

Obviously were both of a pretty similar mindset with this kind of stuff, but do you think there is anytime in the film were you said “Hey, maybe this goes a little far?”

Ryan: Me? NO! But there was a scene that was not originally my idea, where, well I don’t want to get to far into spoiler territory, but lets just say there’s a scene that an extended moment of intumesce between two of our villains, and that scene did not exist in the original draft. We had a table read, and the two actors sat down with me and said “You went everywhere else, but you didn’t do this?” and I never even thought to write something like that particular, shall we say, intimate moment, but once they called me in, I was like ok, their obviously willing to shoot it, so we have to put it in, we have to be willing to push that last boundary.

Shed: Was there a lot of interactions of this type between you and the cast, bouncing around joke ideas and trying to one-up each other?

Ryan: Generally speaking, no, I mean that’s the only moment people really added in. Otherwise, the movie sort of has the very improvised feel to a lot of the dialogue, but I think there were only 3 or 4 lines in the whole feature that aren’t as written.

Shed: Any fun moments from being on the set? I know a film featuring transvestites with chainsaws, retards getting their heads shot in, there had to have been a lot of laughter while making it.

Ryan: Yeah, it was one of the most entertaining shoots I can possibly have imagined. I mean, all the phrases you get to say everyday, like “When you throw him down the stairs, can we tilt is helmet more to the side?” Or like “Aw your fuckin that candid too fast, really gotta slow it down and savor it!” A lot of the language was great, and there were also some just weird set stories.

Shed: Ok, I’m interested. Give me a weird story.

Ryan: Well we were shooting a confrontation between the Priest and the He/She Army outdoors, and we were shooting outside a night club, and then somewhere down the street there was a little old couple in their house, whom I guess assumed there was a real gang war going on. Now there were a bunch of guys running around with farm implements, so of course there was some confusion, but a S.W.A.T. team apparently was dispatched, and were tearing torwards our set, through the parking lot, all equipped with their automatic weapons and their body armor. The guy who owned the nightclub at the time, my hero, dashed out in front of their van, so they had to stop, and basically yelled at them until they left the property. Then he went back and sat down in the middle of his drive way in a folding lawn chair and just stared down all the cars driving by until 3 A.M when our permit would’ve been finally up. So that was our most intense moment (laughs).

Shed: I can’t imagine what went through those officers heads when they saw all those guys in corsets running at each other screaming like banshees.

Ryan: Yeah, and they were all wielding axes, swords, and hoes; it was just a weird set.

Shed: Well thank you for taking the time to speak with us Mr. LaPlante.

Ryan: Hey, thank’s for taking the time to have me. Anyone who likes this project is already my best friend. 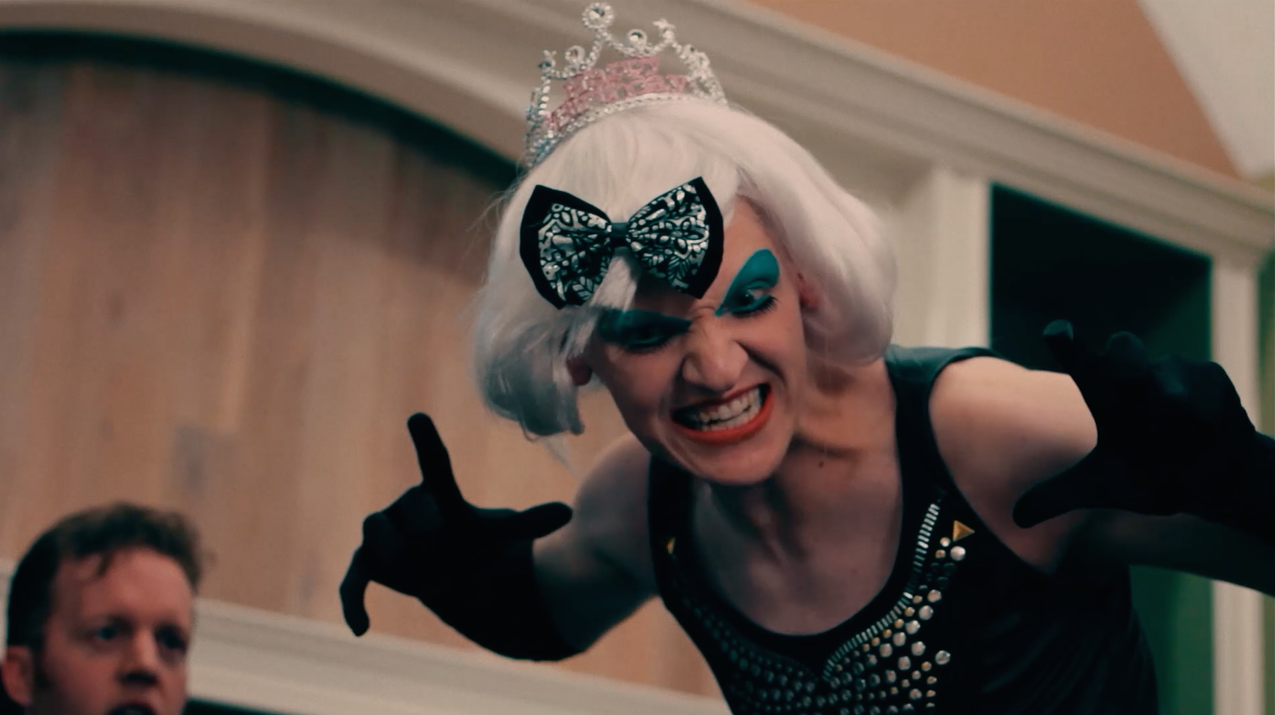 Ryan was a fun guy to talk to, who created a film that went beyond fun into true trash masterpiece. Gory, gross, and filled with every perversion a nutter like me could ask for, Holy Hell is a movie I look forward to watching again and again. While its currently unavailable, you can check out the films Facebook Page here, with a release sometime later this year. Trust me guys, you don’t want to miss out on what I truly believe could be the next big thing in cult.

Jeff is Headwriter for The Blood Shed, and eats, drinks, and bleeds horror. You can send him harassing messages at Headoasp@gmail.com