A Pleasant Chat with a Perverted Man 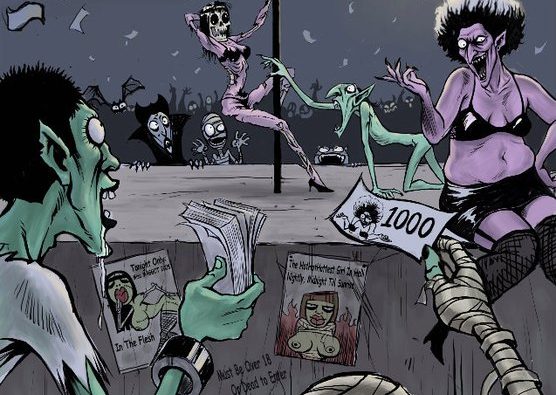 So awhile ago I got to write a pretty fun article on a little comic called Tales From The Whorehouse of Horror, which is exactly what it sounds like, albeit more clever than I at first anticipated.  I’ve always been a guy who enjoys meeting interesting people, and I figure the man who wrote  a book titled Dr. Jekyll: Gynecologist had to be at least a little, um, lets say unique. Luckily for us fans of classic literature mixed with female anatomy, Whorrorcomix author Yakov Levi was nice enough to answer a few of The Blood Shed’s burning questions. Suffice to say, he did not disappoint. 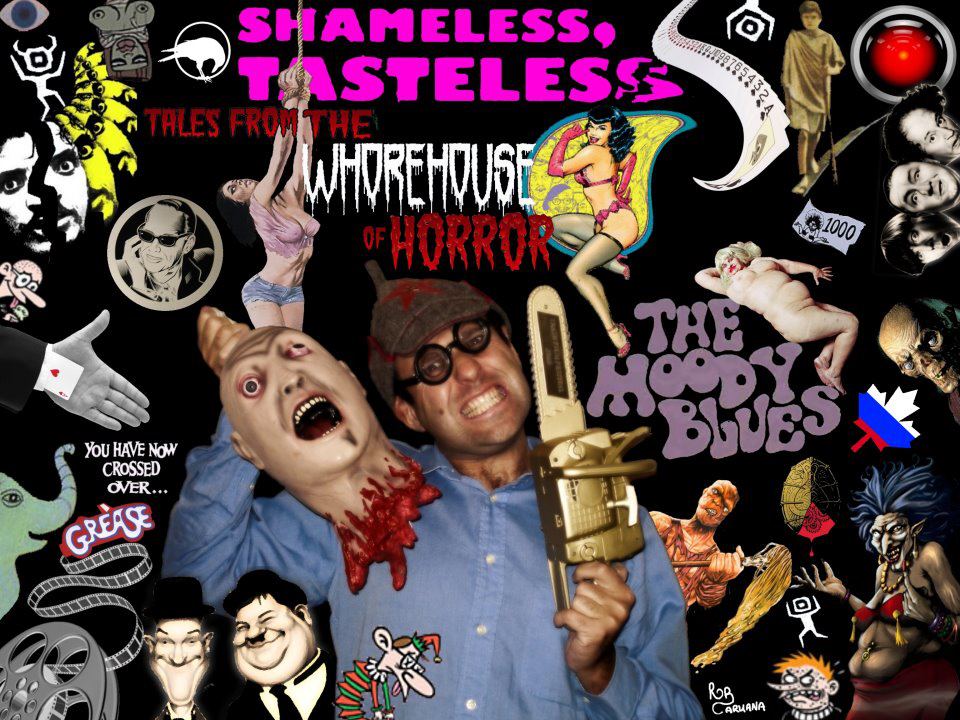 The Blood Shed: Well thank you for joining us Mr. Levi.

Yakov Levi: ….Who is US? I thought it’s just me and you in this motel room? Is someone hiding under the bed? (putting clothes on, getting ready to flee…suddenly, Jeffrey Scott touches me in that special place…pulls me back into bed and assures me that it’s just the two of us, me and him…the “interview” resumes…

Shed: So your comic is pretty unique in its outright vulgarity. Could you tell us a little about Whorror Comix?

Yakov: It’s a new genre I created, combining the words Whore + Horror. No one ever thought of doing that before! And if someone did think of it before, then oops. I guess they did if first! Basically, the inspiration comes from an earlier period in my life: I used to travel the world in search of the best, most exotic hookers….it was a passion and obsession of mine. There were plenty of real-life horror stories to be had, with STDs, crazy whores, dangerous pimps, crooked cops, unhappy landlords…I figured that chasing after sex should merit inspiring its own kind of horror stories. Most horror has sex in it, but in WHORROR COMIX it’s reversed: the sex has horror in it!

Shed: How did you get the idea to stylize these comics as somewhat of a more sexualized EC?

Yakov: ***Answer coming soon when I return from a quick errand. Gotta feed the gimp in my basement, then be right back…Okay, I am back. I was actually bottle-feeding my 4-month-old son, but it’s much more glamorous to say I was feeding a gimp in my basement! By now I hope you’ve actually read at least the free 1st issue of TALES FROM THE WHOREHOUSE OF HORROR, which is downloadable on the homepage of www.Whorrorcomix.com — My father grew up watching Twilight Zone on TV, then shared the reruns with me when I was a child in the 1980s. I was a big fan, loved the show and retold the tales to my school friends who didn’t watch it. I also bought the original 1960s Twilight Zone comics whenever I found them at a Comicon.

Shed: Can you take me into your creative process?

Yakov: First, just to be clear, I don’t illustrate the comics. I created the concept and write the stories. Artists will first do a rough layout of the entire story, without me over their shoulder. I give them the freedom to do what they want, in a rough form. After that, I letter the layouts and make sure it makes sense and then and then I shoot off tons of notes before pencils begin.

The pencils are where some artists quit because I micromanage at that point, making sure they stay true to their original layout and that they improve the spots that need improving. Many artists work slowly, are unreliable, quit, and don’t understand how to tell a clear story in their pictures…the rest survive and end up in my comic, and if they’re willing to work with me again (many don’t want to), I hire them again! I currently pay artists $75 per page for B/W, $110 for color. No one gets rich working for me, but they don’t feel cheated either.

As for stories, there are two ways I come up with stories. METHOD ONE: Rip off someone else’s story! For example, my story SEXTH SENSE is based on a story in a 1964 comic book, TWILIGHT ZONE #15. In the TZ story, a magician gets bumped in the head. In mine, a porn star gets bumped in the head. In the TZ story, if he touches someone, he reads their mind and sees their past. In my story, she touches someone and reads their mind and sees their sexual fantasy. In the TZ story, his power grows to the point where he can see their futures too, not only the past. In my story, her power grows when she sees fantasies of people without even needing to touch them…merely being near them is enough. The endings are totally different, that’s where I went ahead and did my own thing. But I used the basic structure of the TZ story to create my own!

METHOD TWO: Sexualize a famous horror trope or anything else that we’re all familiar with. In HO’RROR HIGHWAY, I took the classic urban legend of the ghostly hitchhiker and made her a highway whore. The story wrote itself, it’s a simple circular structure that builds. For BEWARE THE CHIKAWUKA, there’s plenty of Yeti/Bigfoot/Sasquatch type legends out there…so I sexualized that by having the monster be a man who got infected with a crazy STD which transformed him. Throw in a monster hunter, and voila, there’s your story. I should mention METHOD #3….sometimes a story just pops into my head, fully formed. Just like when Paul McCartney wrote some of his greatest songs in the same manner. Pardon the comparison…Paul is no Yakov!

Shed: How has the horror loving audience responded to Whorror Comix?

Yakov: What audience? I don’t have an audience. That’s why I do these naked motel interviews and suck dicks behind the old bus station…in exchange for positive reviews. I launched my website just a few weeks ago and am struggling daily to get noticed on Facebook or wherever, and by writing to individuals like yourself to let people know my website exists. It’s often demoralizing and feels futile, like an uphill climb, but the hill has waaaay too many other people climbing as well, and there’s gonna be an avalanche any minute and me and my Sherpa guide are about to die…look, there’s a frozen body from the 1920 Everest expedition.

I shouldn’t despair. Business is picking up slowly. Let’s just say my plan to purchase that 2nd mansion in Beverly Hills is indefinitely postponed…. actually I don’t have a first mansion either.

Shed: Has the series raised any controversy with its subject matter?

Yakov: Yes. The front cover of issue #1 is graphic and very sexual: a girl trapped in an iron maiden which has penises for spikes…not to mention those two rats fucking on the steps. It’s very hard to display this comic book at conventions and shops and on many websites. 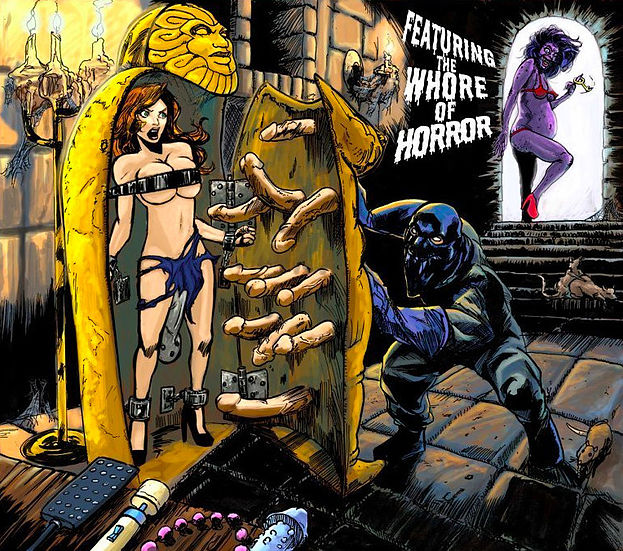 The Shed has no such shame

The cover for issue #2 (available for paying customers) is currently quite tame, but I am soon hiring an artist to redraw the cover of #2 and it will be much nastier than the cover of #1. The new cover for #2 will have a guy raping a corpse in a morgue, with a wacky bit of humor tossed in (gotta always add the humor, so that people know this is just a joke.) I think if I could just tone down the covers I’d have an easier time, but I really can’t…I just can’t…I feel compelled to shock and sicken people. Besides, I hope that by limiting the places I can show my comic, this might help guide me to the places that most appreciate it.

Shed: Any ideas for further Whorrish comics in the future?

Yakov: Well, currently my website has the following comics on it: TALES FROM THE WHOREHOUSE OF HORROR #1 and #2 DR. JEKYLL, GYNECOLOGIST #1 and #2 (my sexy sci-fi title).
Plus some boner, er, bonus stories and other features. For the cheap, slutty price of $4 the reader can download the PDFs of it all. New stories for TALES FROM THE WHOREHOUSE OF HORROR #3 are currently being written. Expect it to be online by fall 2016. Unless the artists screw me by quitting or dragging the process on and on, then expect it later. The stories already have fun titles like “WET SCREAM” and “THINGS THAT GO SLURP IN THE NIGHT” — so expect a good time!

Shed: Well thank you for joining us Mr. Levi. Its been a pleasure.

Yakov: The feeling is mutual! See you at the red light district of the cemetery! 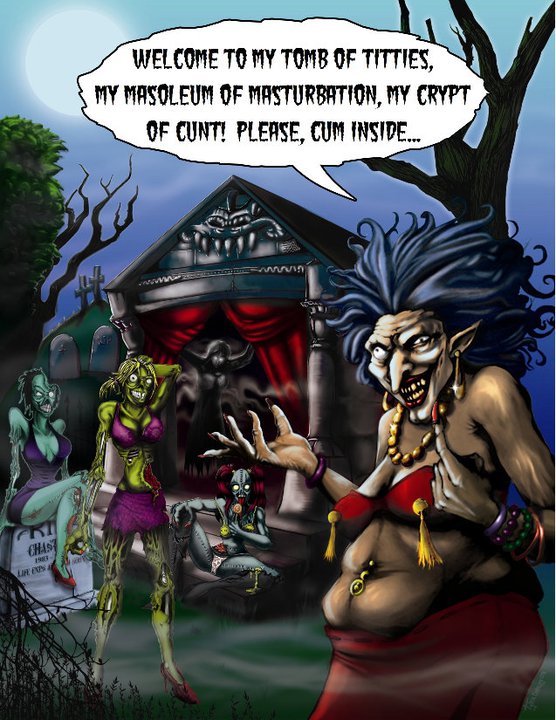 So in case you didn’t catch it from the interview above (the jokes, not a STD), Yakov is a pretty funny guy, and a damn good writer. I read through all his stuff in preparation of the article, and it tickled my bone (funny and otherwise.) Give him a shot guys; if you’ll pay $30 for a handy in the massage parlor, maybe you can afford $4 for some of the wittiest indie comics out there.

Jeff is Head Writer for The Blood Shed and eats, drinks, and bleeds horror. You can buy Whorror Comixs here, and send Jeff suggestive photos at headoasp@gmail.com