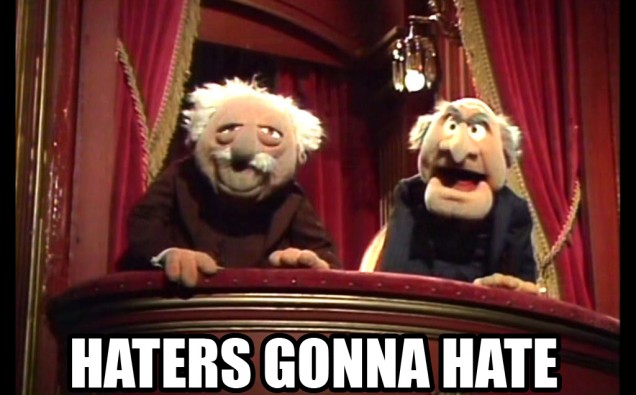 My name is John Lepper. I am the owner of theblood-shed.com and one of its writers. Today I happened upon a couple of articles regarding your statements pertaining to the legitimacy of internet film critics. You said, and I quote,

“I think the role of the critic has been very diminished, because you get a lot of people who set themselves up as critics by having a website where it says that they’re a critic. Even now if you go to Rotten Tomatoes, you have critics and then you have ‘Top Critics’, and what that really means is that there are legitimate critics who have actually paid their dues and worked hard and are in a legitimate website connected perhaps with a newspaper or perhaps not.

Then there are all these other people who just say they’re critics and you read their writing and they can’t write, or they can write and their writing reveals that they’re quite stupid and ignorant. … Some voices have emerged that are actually quite good who never would have emerged before, so that’s the upside of that. But I think it means that it’s diluted the effective critics.”

Frankly, I find your opinion on what constitutes a “legitimate critic” quite elitist and pretentious. You think we need to pay dues to earn the right to speak our minds on a film? I bought the film! That’s all the right I need, good sir. We have a freedom of speech, allowing us to speak our opinion on any number of things, including cinema. To try to step on that, to call that lowly because we are not attached to some media giant is, simply, erroneous on numerous levels.

You speak of us, say that we “dilute” and “diminish” the “legitimate” critics. You know, there are in fact some very amateurish online critics, I will concede you this point. But to believe that they somehow take power from the big wigs demonstrates a massive lack of understanding as to how the system works. If someone puts up film reviews online and they are not very good, they will not build an audience. People will only sit through so many typos, good sir, before giving up and moving on. This being the case, how does one come up with the idea that this kind of critic could possibly compete with someone who has the backing of a multi-million dollar company? The very suggestion boggles the mind.

We are theblood-shed.com. We strive to put the independent side of the horror genre, the side where the creativity primarily resides, into the limelight. We want to give it the respect it deserves. We cheer for the little guy. And that philosophy holds true for this as well. Mr. Cronenberg, I would rather read the review of an online film critic who is sitting in his studio apartment in his underwear, typed up after coming home from his low-pay retail job, than I would read the review of a rich corporate henchman in a smoking jacket, typed up after sitting alone in a dark theater where he was given the VIP treatment. Why? Because the former scenario is how I am typing this letter to you. The writer in the former scenario is someone I can relate to. But do you want to know how much my preference hurts the “legitimate” critic? Well, he is still pulling in a paycheck probably a minimum of tenfold my own, so I would perchance to guess “not very much”.

PS: I do so hope that my writing wasn’t too stupid or ignorant for you.