To whom it may concern

Uwe Boll, infamous purveyor of atrocious cinematic monstrosities, is upset. See, poor Uwe was trying to get Rampage 3 funded on Kickstarter. And, well, with 4 days to go, it does not appear he will make it. 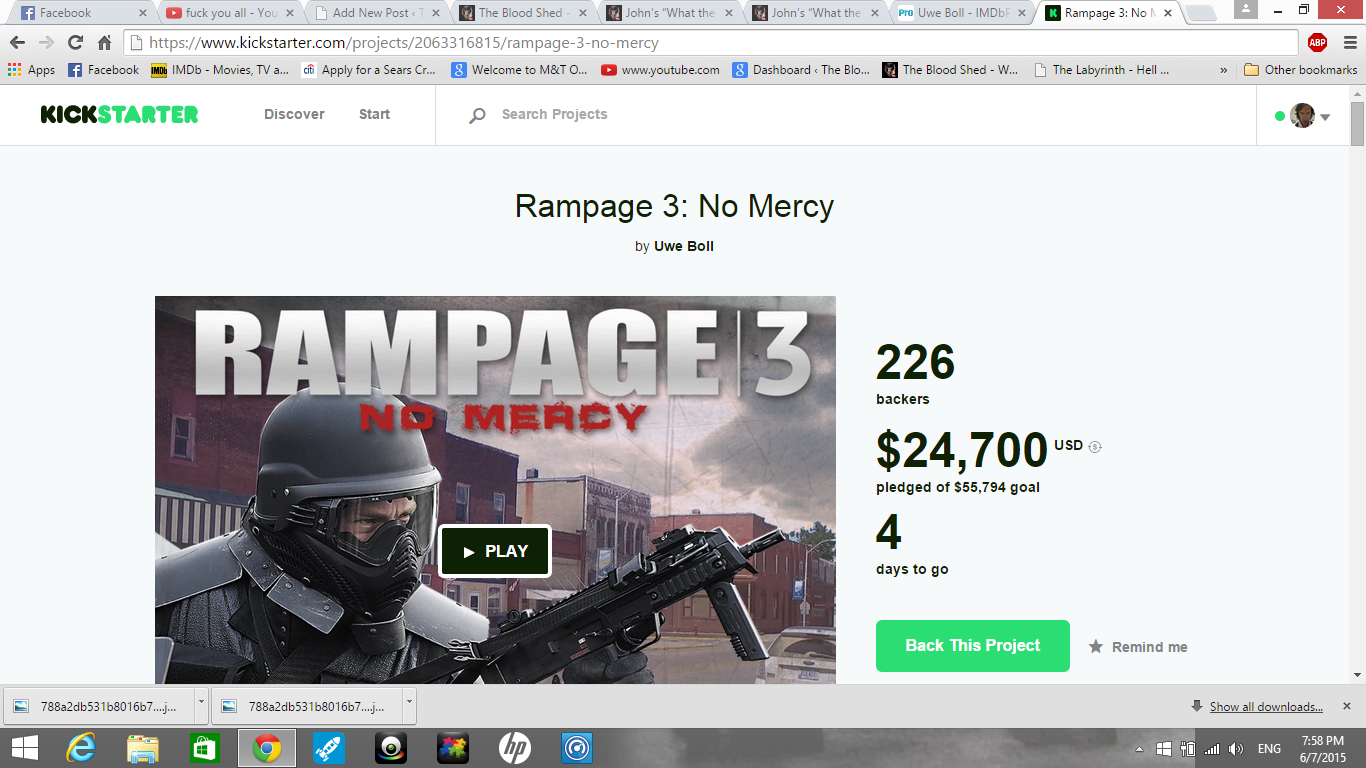 Yes, all 226 living fans of Uwe Boll pledged their support and he still comes up a little shy of 50%. Good effort, but not good enough. And, sadly, with the rules of Kickstarter, the mad Dutchman known as Boll will not see a cent of any of the pledges. Whatever is a man worth $10 million to do? 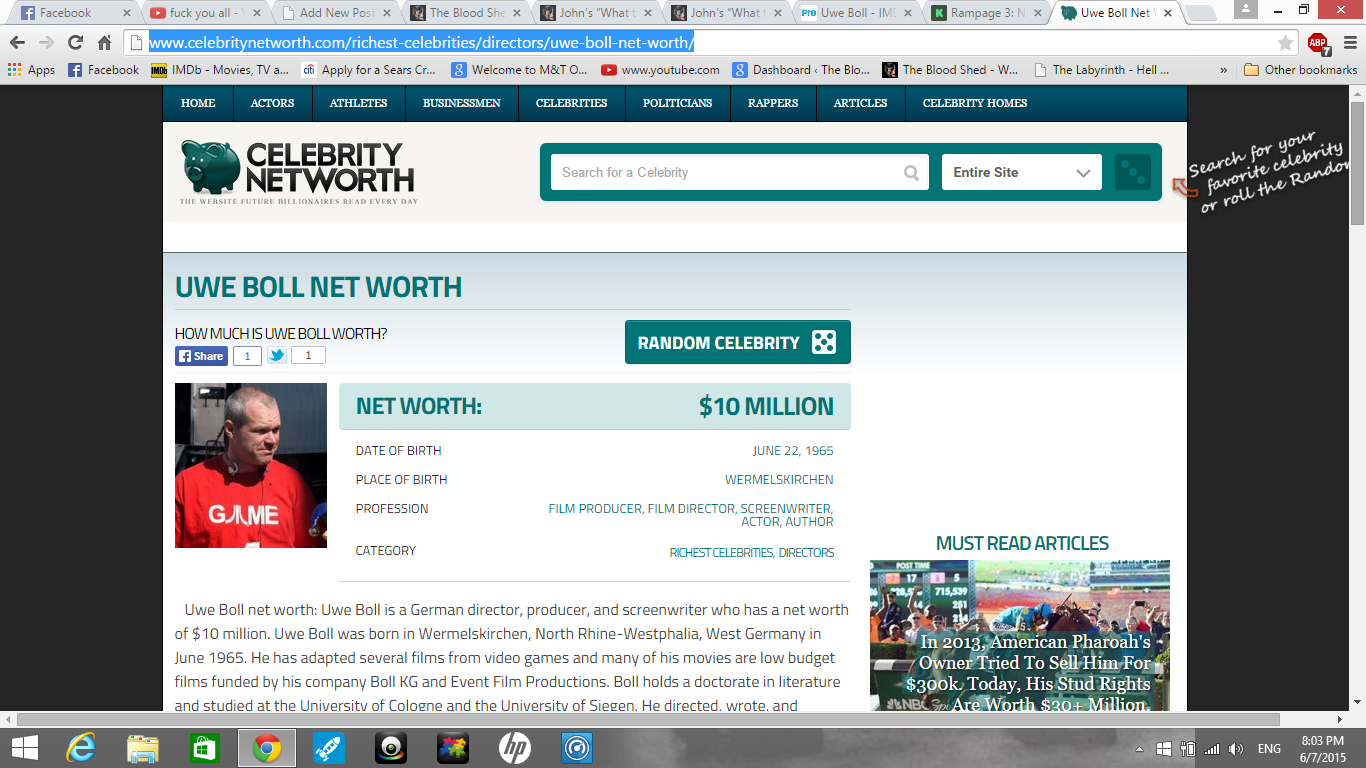 Does he:
A) Pay for the film himself
B) Gracefully concede defeat
C) See the light and give up on making movies (Please be C)
D) Rant at a webcam for a minute and a half, call the population of the Earth “retards” for not supporting him, follow it up with the directive for us all to “go fuck yourselves”, and proceed to gloat that he has “enough money to just play golf til I’m dead”.

Well, dear reader, the answer… well, it probably will not exactly shock you if you know anything about Uwe Boll. Leeeet’s see what’s behind curtain number 1!

Mr. Boll, here are a couple of truths about where I am right now. For one, I’ve been in a bit of a funk. Haven’t been writing as much as I usually do, been stressed, depressed. Well, turns out what it took to snap me out of it was a angry crazy man with a doctorate calling me retarded. Thank you for that.

Secondly, my initial reaction was to title this article “No, Fuck You, Uwe Boll”. But, you know, you have such a limited vocabulary, I thought I would take this time to take the higher route and help you expand your horizons a little by example.

I have long been at once confused and slightly entertained by your unprofessional antics. Whether it’s challenging online critics to boxing matches or calling geniuses like Eli Roth “fucking retards” because they celebrate a better reception with their projects, you never cease to bring forth a good hearty chuckle.

I’ve seen many of your films. I’ve even reviewed a couple of them (House of the Dead and Alone in the Dark) here in a series of reviews I have aptly titled “What The Heck Did I Just Watch”? Almost universally, I have found them to be unimaginative, unoriginal, contrived, and making very little sense. The fact that you more often than not choose to adapt video games into films demonstrates a distinct lack of original ideas. I might add that I lay at your feet the consensus that video games film adaptations suck because, simply, when people say that they are usually thinking of one of your movies. Well, that or Super Mario Bros from the 90’s, but that is neither here nor there.

Rampage and Rampage 2 I will actually admit were pretty decent films. I did enjoy them for what they were, but, let’s call a spade a spade, what they were was pointless violence for the sake of violence. And I do enjoy films like that sometimes, but it hardly makes you Hitchcock and certainly does not give you the entitlement to think you are Cthulhu’s gift to film making.

Let’s get to the point, Dr. Boll. Your campaign failed because you have failed as a film maker. You have failed the movie goers (you have not one but two films on the list of the bottom 100 rated films on all of IMDB) and you have failed the movie industry (having interviewed some people who have worked with you, I have heard horror stories about your movie sets). There is actually a petition online with 353k people wanting you to retire. Try to actually picture how many people that is, Dr. Boll. Try to picture 353k people standing in front of you right now, all of them wanting you to just stop. On the flipside, the “Long Live Uwe Boll” petition for you to keep making movies has yet to reach 8000 signatures.

And now, because you have failed to get people to fund your film, a film worth such a small amount as compared to your net worth that you could probably sell maybe 3 items of fine furniture in your home and see it through to the end, you lash out like a toddler. You are a grown man, a grown man who, somehow, actually has a Doctorate in literature yet speaks like someone who does not read above a 4th grade level.

Let me explain something to you. What people spend their money on is their business. No body owes you anything. Honestly, quite the contrary, you very likely owe thousands of people the costs for their therapy post sitting through one of your Geneva convention violating piles of celluloid drivel. Here’s how life works, Dr. Boll. You want something done and you have the money to do it yourself, YOU pay for it.

PS: Any issuance of challenge to box may be sent through our site contact form HERE