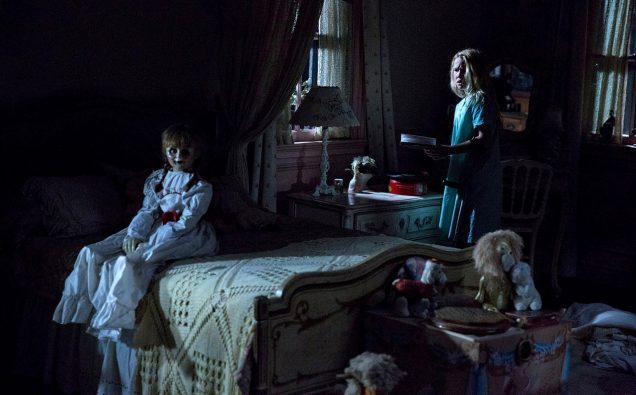 David F. Sandberg appeared at the Warner Bros panel at Wondercon this past weekend, and fans got some insight into the upcoming movie, about the possessed doll, Annabelle. 2016’s hit horror film Lights Out writer/director Sandberg, described how excited he was to play in the universe James Wan has created. “The Conjuring is a very classic horror movie, and this is a chance to do my version of an old-school horror movie. There are not as many fun moments in Annabelle: Creation as there was in Lights Out, but you need to have that dynamic range to balance out the super scary parts.” Sandberg explained. “There is even a scene in the movie that came from a dream I had. I actually dreamed it like it was a scene in the movie. The writers loved it”

Annabelle: Creation will be a prequel to the original Annabelle movie, gives us the origin of the doll, introduced to us in the Conjuring films, and we discover why it is so evil.  The official synopsis: Several years after the tragic death of their little girl, a doll maker and his wife welcome a nun and several girls from a shuttered orphanage into their home, soon becoming the target of the doll maker’s possessed creation, Annabelle.“This is a prequel; hence, the Creation title. We actually see her being made, which was really fun for me,” the director said of the creepy doll. “I probably wouldn’t have been as interested in making it if it had been a straight continuation of the first movie.”

Annabelle: Creation is the second movie about the doll, which includes the 2014 Conjuring spinoff, Annabelle. The horror film stars Stephanie Sigman, Talitha Bateman, Lulu Wilson, Philippa Coulthard, Grace Fulton, Anthony LaPaglia and Miranda Otto and is set to open in theaters August 11th, 2017. Enjoy the trailer and put the date on your calendar. It looks like it’s gonna be a great horror flick!