Body Horror For A New Generation 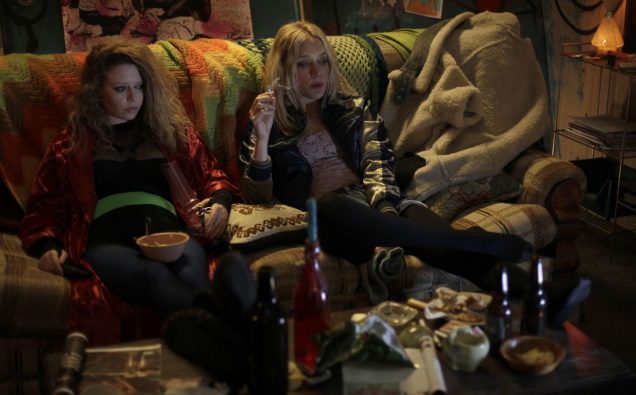 Any Orange Is The New Black fans in the house? While not a horror series, it’s an excellent show with great characters, one of whom happens to be played by Natasha Lyonne, the star of todays film review Antibirth. She plays largely the same character in both (a frizzy haired, sarcastic drug pusher), but her excellent performance cannot be understated. Now it would be great if that performance came in a film that didn’t lean on the muddled side, but we’ll get to that in a moment.

First up let’s adress the gore fans; there’s a lot here to please you, if you can sit through the film long enough to reach it. Natasha’s character Lou is pregnant with something nasty, and all the gross side effects that come with it are on bloody display. And yes, the climax features a birth truly worth seeing. It’s disgusting, violent, and over the top in a way a lot of horror films aren’t anymore.

But to get the that repugnant end, you have to sit through a bland middle. I like slow burns, but the wick on this stick of dynamite is a mighty long one. Everything blows up eventually, and in glorious fashion, but there are plenty of scenes that feature Lou shooting up, Lou eating junk food at gas stations, Lou generally lounging about; character building is great, but we learn very little about her beyond curly haired face value. And rather than strung smartly thoughout, AntiBirth chooses to save itself for the end. And the end, great as it is, has a hard time perking up the saggy bits that come before.

Overall I didn’t hate Antibirth, and I really enjoyed seeing Natasha Lyonne again. If you are into the genre, it’s certainly worth a watch. And there’s enough promise here to hope for a better film in the future from writer/director Danny Perez. I say give it a shot; or show it to your girlfriend who wants kids. This might do the trick.

Jeffrey Scott is head writer for The Blood Shed and eats, drinks, and bleeds horror. You can send him harassing messages at headoasp@gmail.com