“You can’t win a moral argument with me … I’ve made a deal with the devil.” 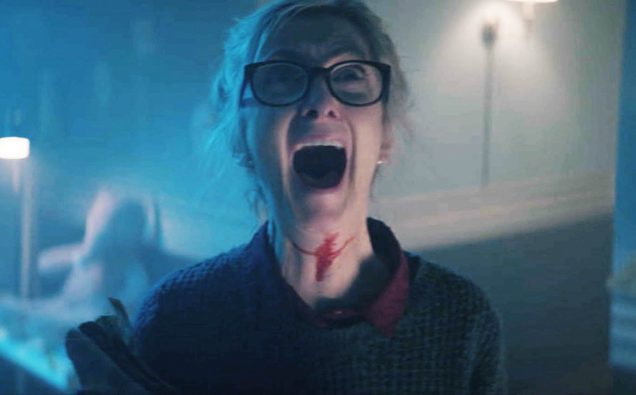 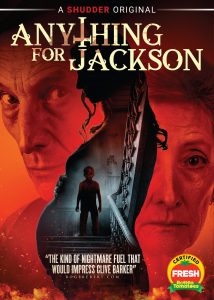 Many horror directors have tried to go the dark comedy route only to make a silly film that doesn’t quite work. In the case of Anything for Jackson, Justin G. Dyck brings us a pitch-black, yet subtle comedy that is smart, gruesome, and unrelenting.

Not that I have seen them, but I did read that Dyck and writer Keith Cooper’s projects before this were Christmas films, so making a horror movie is out of their normal wheelhouse. As a horror fan, I am happy to report this genre switch was a success. One too many holiday films made them cross over to the horror side, I guess! Lucky for us!

The film takes us along on a creepy journey with Henry and Audrey Walsh, (Julian Richings and Sheila McCarthy) a grieving couple who lost their daughter and grandson Jackson in a tragic car accident. Not being able to live without the adorable little Jackson in their life, they investigate the possibility that they could bring his spirit back by performing a satanic ritual to put Jackson’s spirit into the fetus of a pregnant woman.

Sounds like a very safe and sane plan to me!

Opening with the kidnapping of Shannon Becker, (Konstantina Mantelos) the chosen mother-to-be, the film then backtracks and tells the story of Henry and Audrey, who loved their grandson, and apparently mean well, but quickly get in over their heads. They join a rather amateurish Satanic group who meet at the local community center, complete with snacks for after the meeting rituals. Henry then manages to find a book of spells that he goes all the way to Jerusalem to buy. This Necronomicon-style book seems to work incredibly well when Audrey tries it out, bringing back to life dead birds and animals that she finds in the forest near their home. Testing completed, it’s now time to get Jackson back.

As we in the audience have learned over and over, playing with the occult never goes well. Like in The Evil Dead, when a demon is called by reading an incantation from an ancient book, there are sure to be many naughty friends right behind

I guess the couple didn’t bother to read the fine print. 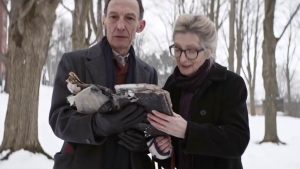 When Audrey and Henry try out their hand with necromancy over Shannon’s very pregnant belly, the only advisor they have is a sad guy-who-lives-in-his-mom’s-basement type from their Satanic club. As soon as they speak the words in the book, the world around them changes forever, and not in a good way. It seems Jackson is there, but he is not alone. Any ghost in the vicinity that wants a new home, has come along to play. Also, much like The Omen, regular folks around the neighborhood, including a police officer investigating Shannon’s disappearance, seem to want to give themselves over to the cause in very brutal ways and seem to be in a loop, doing their terrible deeds over and over. Unlike regular jump scares, these characters pop in and out without warning, in a darkly humorous, but very nerve-wracking way. 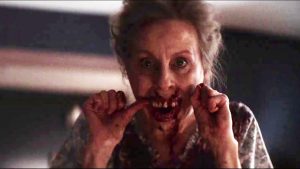 The spirits were honestly my favorite part of the film.

The creepy specters range from a child in a sheet ghost costume, a woman flossing the teeth right out of her head, to a guy with a bag over his head who contorts into the most terrifying positions. The newly dead people who were ill-fated enough to visit their house, join in too, and give the Walsh family a most disturbing show, that they are doomed to repeat again and again.

The acting in this film was phenomenal!

The performances from Richings and McCarthy were perfect, and the chemistry between them so strong, that even though what they were doing was horribly evil, I couldn’t help but feel sorry for them. Their grief pushed them over the edge into taking some seriously drastic actions. Their choice to go through with this has now opened a portal to hell and could very well have started an apocalypse of evil spirits coming into the world. But they meant well.

It came as a surprise to like them so much, even though they are unapologetically cold and calculating. What would any of us do if grief took over our every thought, and a means to get what we lost was right in front of us? Would we take it?

I truly enjoyed Anything for Jackson and it is definitely one of my favorite horror films for 2021! If you loved The Visit, The Evil Dead, The Omen, or just love the occult, then you will adore this film! See it now!!!