The next film from mad genius Dustin Mills! 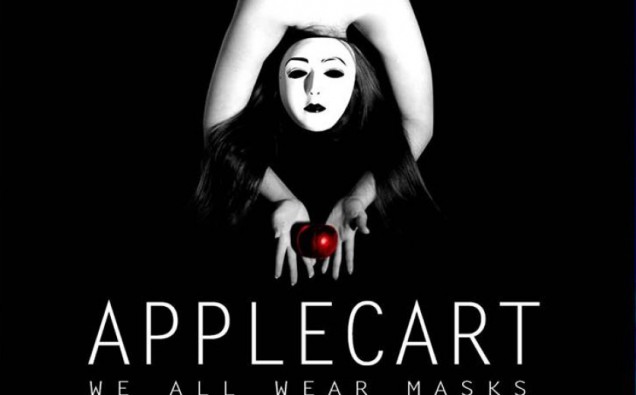 My favorite thing about indie horror has got to be just the hunt. Digging through, looking for the under-the-radar gems. The films of Dustin Mills consistently qualify and his latest, Applecart, is no exception. A departure from his recent string of highly graphic horror, Applecart is 100% artistic in delivery.

The film is a series of 4 vignettes. The first, “Sleepover”, tells the story of a family that falls apart in the course of their daughter having her friend over for the night. “Caretaker” is about the behavior of a female nurse and her abuse of an elderly man in her care. “Dad” is about the relationship between a daughter and her single, zealot father. Finally, “Let Me Show You Something” is about two co-workers who are friends and what happens when one of them is rejected by a girl he likes.

This movie is one of a kind, delivered in a unique style. The film is black and white and with no verbal dialogue. All of the actors wear the same white, originally featureless mask (see featured pic) with some details added depending on character. Added to this, a masterful usage of sound fx ranging from family sitcom type music to audience reaction sounds is arranged for often absurd and ironic effect.

The few other times I have seen a film without dialogue (like the amazing Flowers by Phil Stevens), I have relied on facial expressions in conjunction with body language to read the emotions of the characters. With the masks added, the facial expressions are blank and static. For this reason, body language becomes the entirety of actor communication. It is akin to mask theatre, even Japanese kabuki, and utilizes slightly exaggerated gestures to great effect. The actors were all well up to the task, it would seem, as these performances were flawless in their delivery.

Overall, the film has a very absurdist feel to it, applied to slice of life situations that spiral out of control in a manner that brings to mind another black and white absurdist piece, Eraserhead, in terms of tone. Applecart is yet another successful cinematic affair from a director who is quickly becoming one of my favorites!