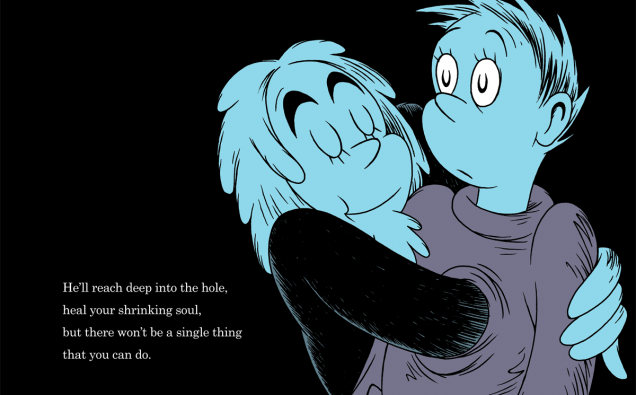 Dr. Seuss books and horror movies reside in very different neighborhoods of the Entertainment Spectrum—like Beverly Hills and Skid Row! Dr. Suess’s works were made with children in mind whereas horror movies are (basically) adults-only fare. Yet somehow, the artist known as DrFaustusAU has managed to bridge these disparate art forms.

Over the past few months, DrFaustusAU has done a series of mock-book covers that reimagine horror movies as works of the venerable Dr. Seuss—with surprisingly effective results. Previous works include: The Evil Dead, The Silence of the Lambs, and The Exorcist. 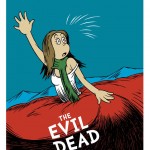 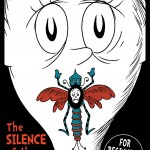 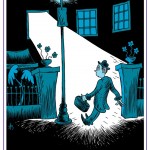 DrFaustusAU’s most recent endeavor, however, kicks things up a notch with a fusion of Seuss-style art, horror movie sensibilities, and Gothic rock. He’s created a 10-panel series that uses the lyrics from Nick Cave and the Bad Seeds’ cult-hit Red Right Hand as text. The result is something unexpectedly brilliant, both inviting and utterly haunting. 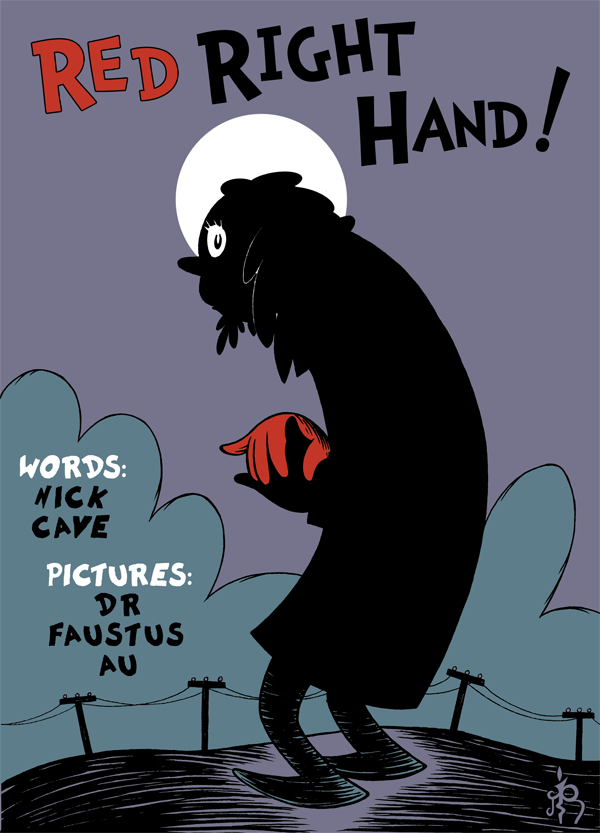 Nick Cave and the Bad Seeds are old-school punk/prog-rockers from Australia who are immensely popular among those who appreciate epic scoring with dark narrative lyrics; indeed murder and death are common themes in their discography. The song Red Right Hand was a single off the album Let Love In, which was released in 1994; it quickly became a fan favorite and was used in several movies, including the first three Scream films and The X-Files.

The title of the song comes from a stanza in John Milton’s epic allegory Paradise Lost:

“What if the breath that kindled those grim fires, / Awaked, should blow them into sevenfold rage, / And plunge us in the flames; or from above / Should intermitted vengeance arm again / His red right hand to plague us?” (Book II, 170-174)

For those unable to decipher the subtext, the man with a “red right hand” is the Devil (Satan, Lucifer, Old Scratch—take your pick!).

Attempts to contact DrFaustusAU through Facebook and his Deviant Art page were unsuccessful, but I’d love to ask him if there are plans to release Red Right Hand as a physical book (or if copyright laws prevent this possibility). I’m also curious how he came up with such an offbeat and original idea. But even without gleaming insight into his processes, his work is undeniably fantastic, and I hope to see a lot more of it in the future.

Below, find Red Right Hand in its entirety for your perusal. Enjoy! 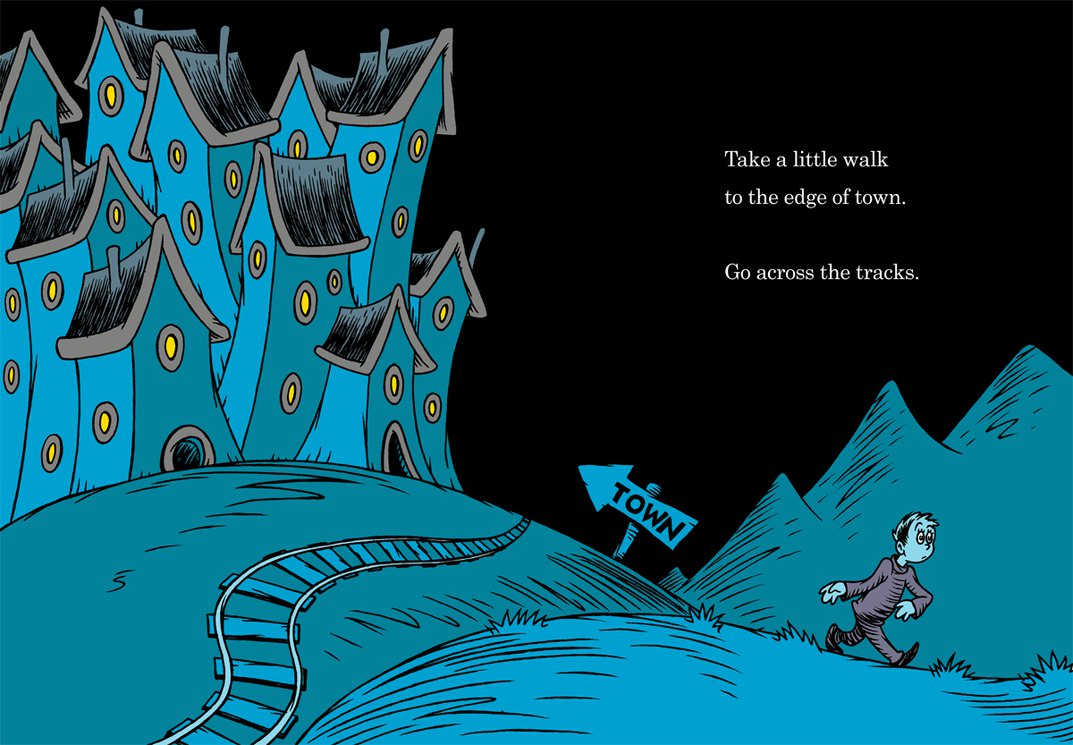 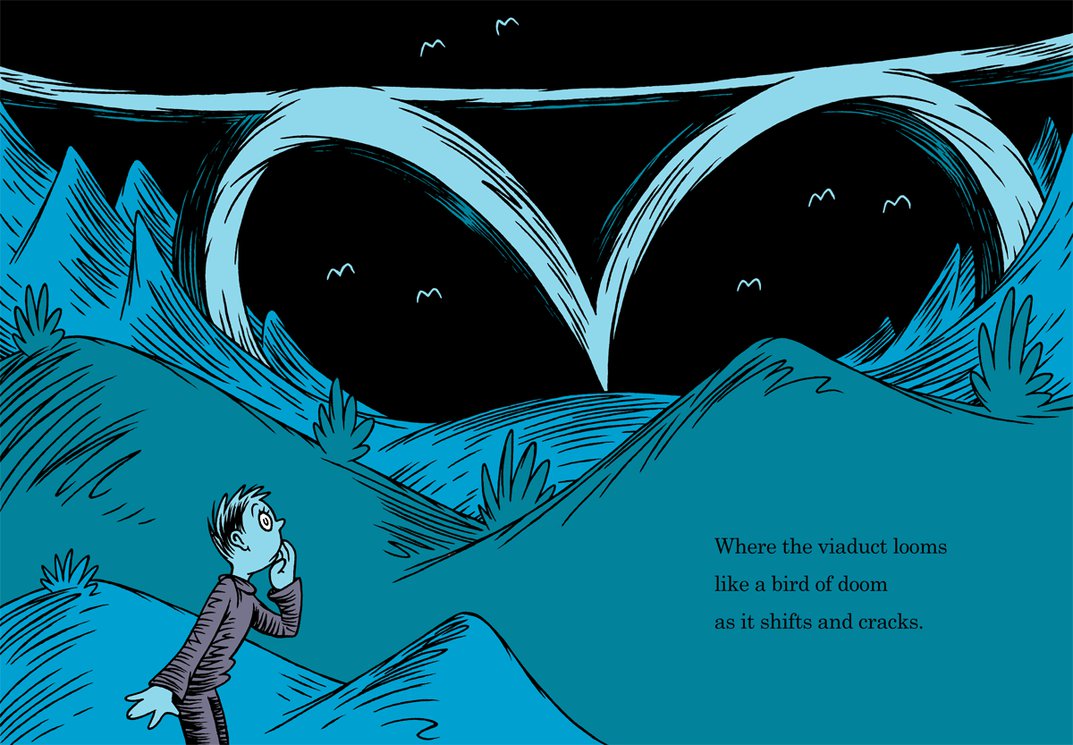 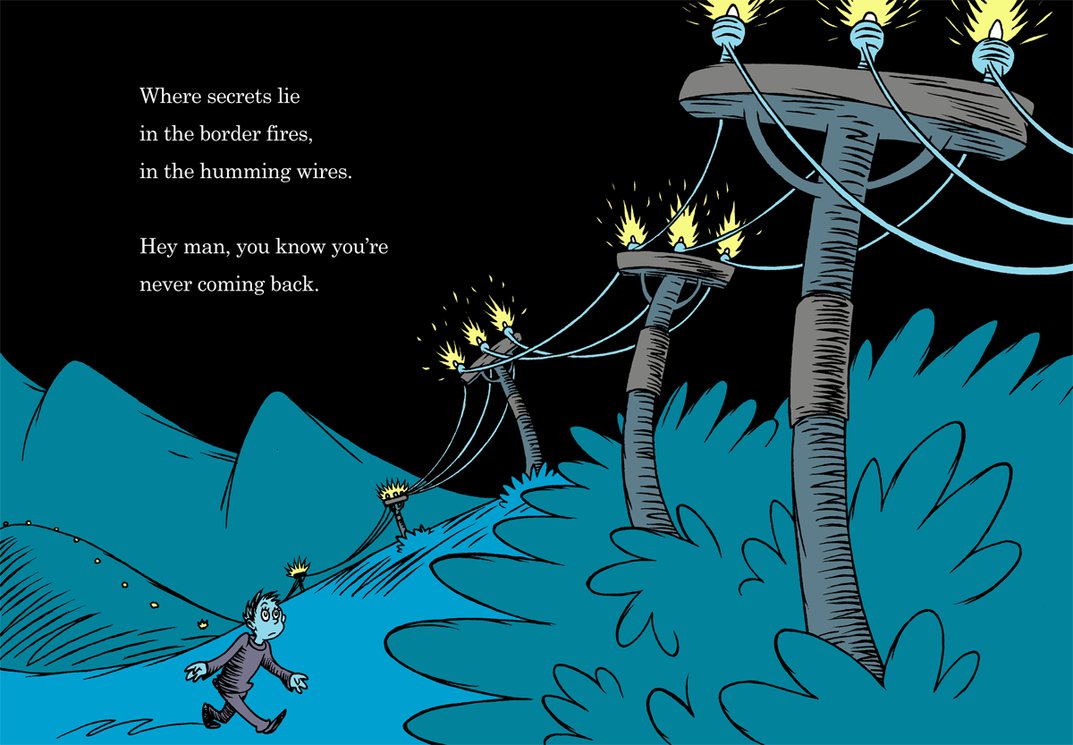 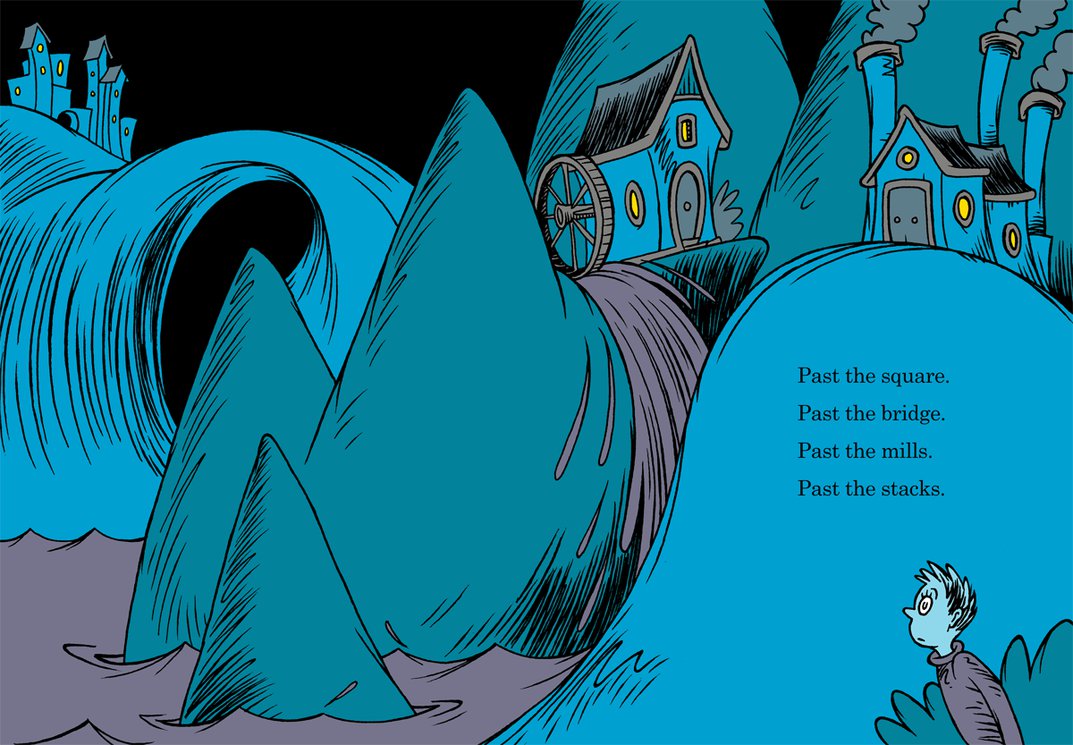 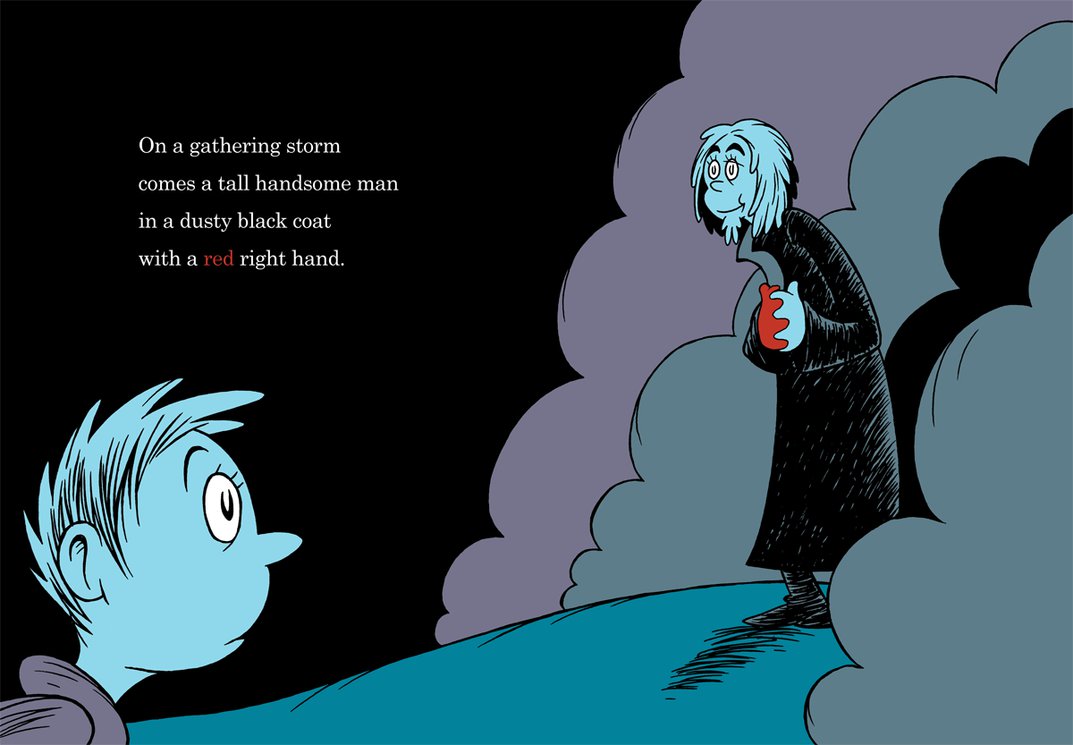 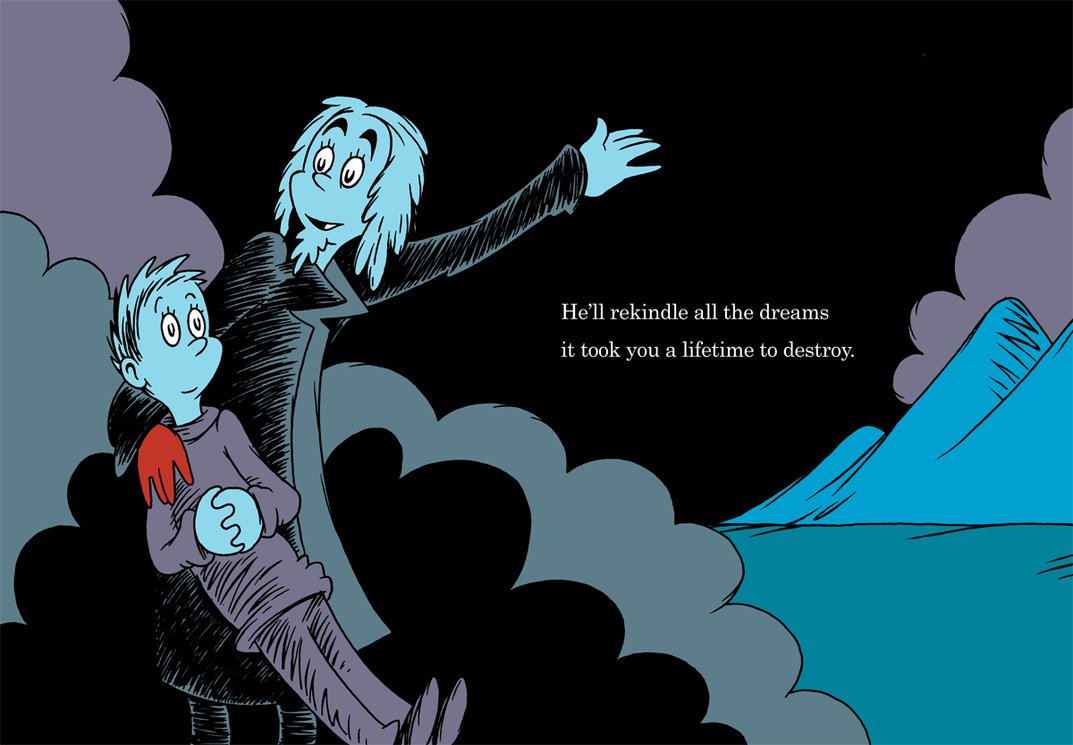 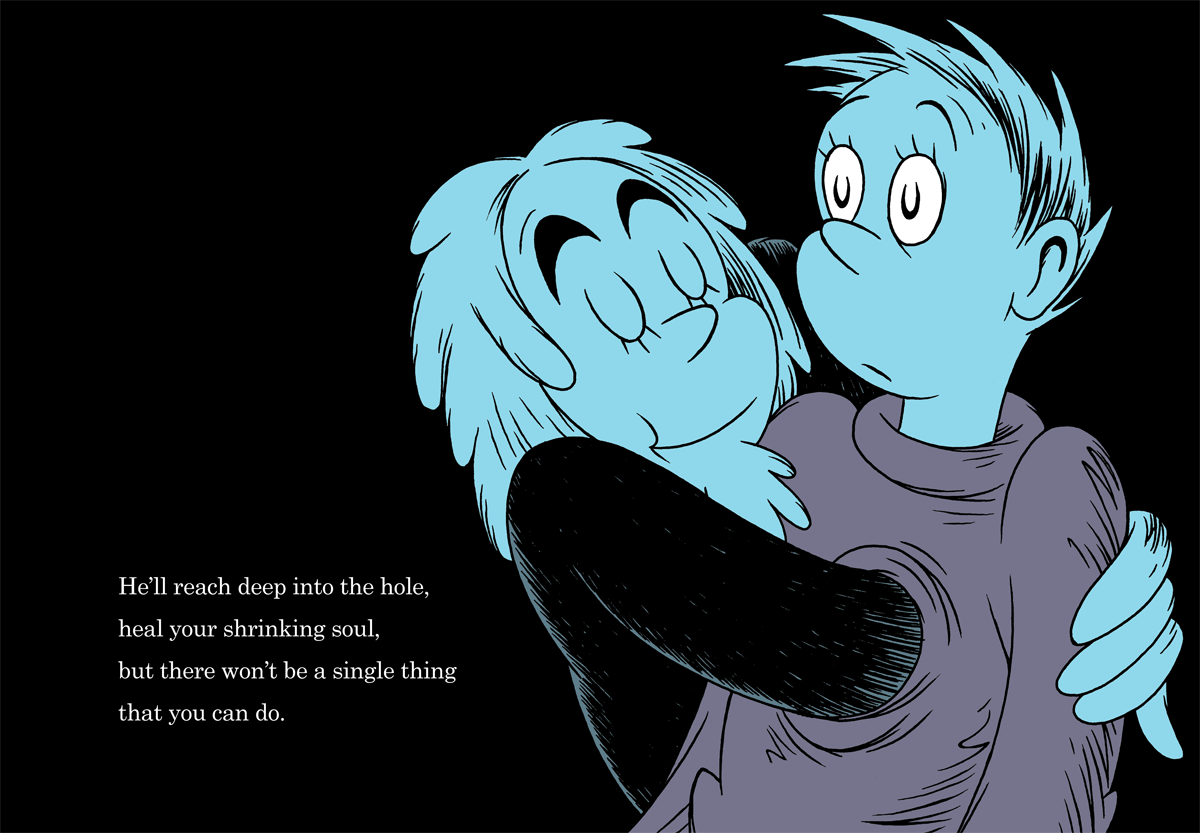 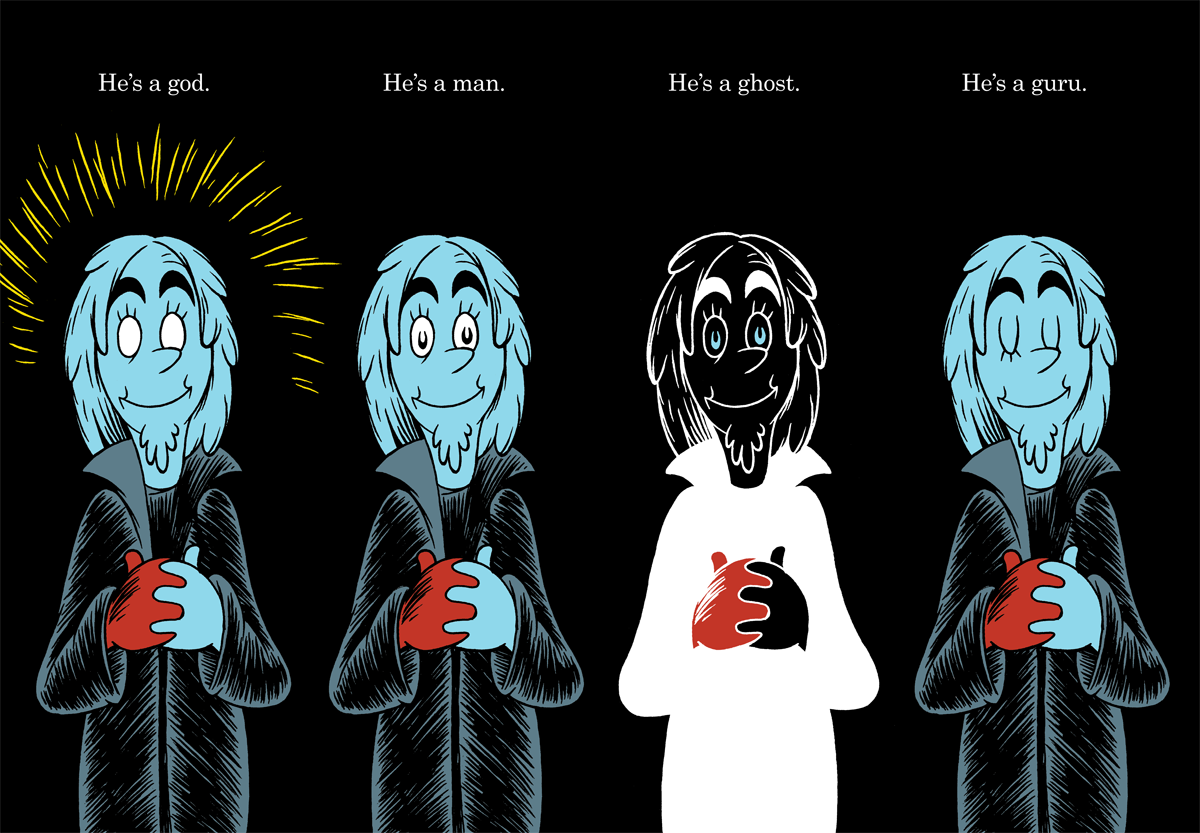 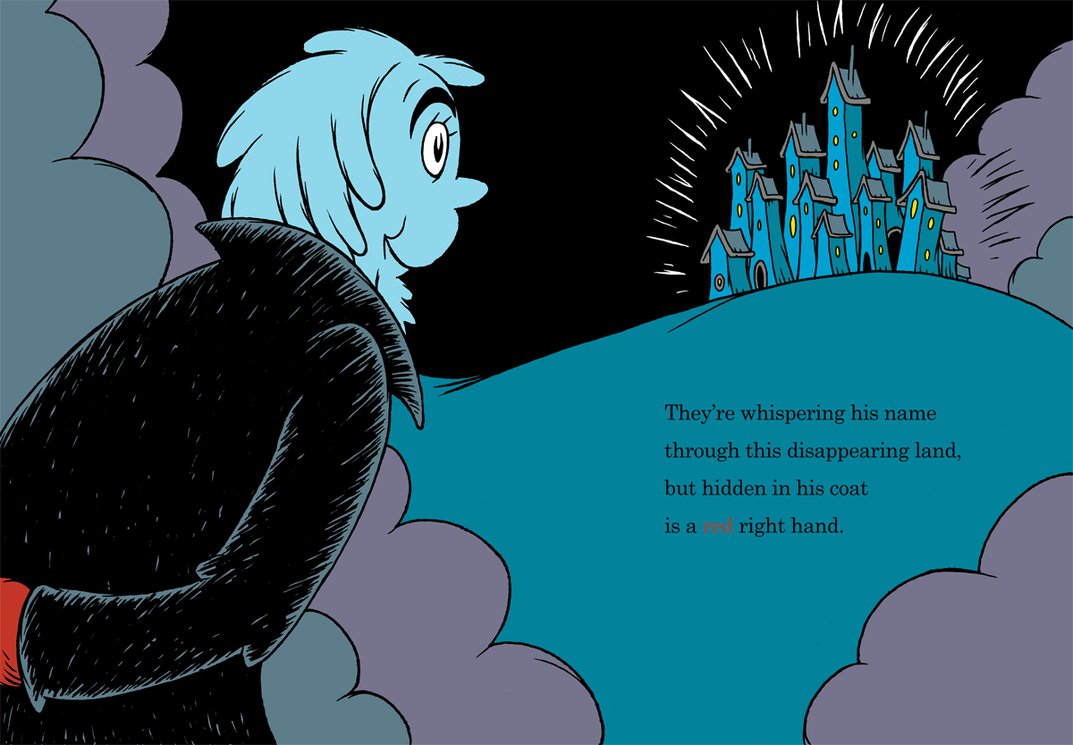 Are you a fan of DrFaustusAU’s artwork? Sound off in the Comments section!