Be My Cat: A Film For Anne is “Dangerous,” “Revolutionary,” and “Convincing and Frightening” 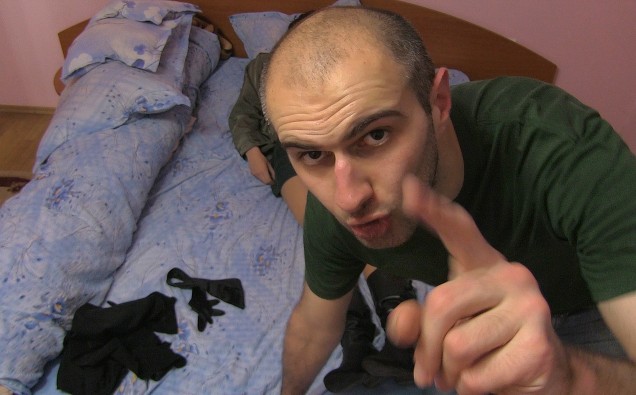 Be My Cat: A Film For Anne has been setting the film festival scene overseas! This film, which is Romania’s first ever found footage film, just got accepted into its latest film festival and this one’s a big one! From the press release:

One of the year’s most anticipated found footage horror movies, “Be My Cat: A Film for Anne“, has been selected at 2015 A Night of Horror International Film Festival în Sydney, the biggest genre film festival in Australia and one of the most important in the world. It’s going to be an Australian premiere on Sunday, November 29. In the official programme, A Night of Horror wrote that Be My Cat is “the most revolutionary addition to the found footage genre since three college students disappeared in the woods while making a documentary about a witch, and this film is infinitely more convincing and frightening“. Be My Cat is directed, produced and written by Adrian Țofei, starring Adrian Țofei and actresses Sonia Teodoriu, Florentina Hariton and Alexandra Stroe. It’s about a young man in Romania who goes to shocking extremes to convince Hollywood actress Anne Hathaway to play in his film.It had its World Premiere at one of the world’s top genre film festivals – 2015 Fantasporto International Film Festival in Portugal, and then the Romanian Premiere at 2015 TIFF Cluj, UK Premiere at 2015 Bram Stoker International Film Festival, South American Premiere at 2015 Zinema Zombie Fest in Colombia and the Spanish Premiere in Torremolinos. It won Special Mention at Dracula Film Festival in Romania and the Out of the Box Jury Award plus the Audience Award at 2015 Area de Contencao – Cartaxo International Fantastic and Horror Film Festival in Portugal.Also, the movie has been recently ranked #44 in Audiences Everywhere’s The 100 Best Horror Movies of the 2000s, and Dread Central wrote that it’s “potentially revolutionary and potentially dangerous. The line between fact and fiction has never been so terrifyingly and brilliantly blurred“.

Adrian Țofei told us that he’s waiting to hear from other film festivals (especially for a North American Premiere), and at the same time looking for distributors. He’s also working on a new project – an apocalyptic movie called „We Put the World To Sleep”. Actress Florentina Hariton decided to plunge into filmmaking with her short film „Duality”, Sonia Teodoriu finished shooting a couple of months ago for the upcoming Romanian movie „Herman: The Man Behind the Terror”, and Alexandra Stroe continues her theatre career.
Oficial Site: http://bemycatafilmforanne.com/