The Best Horror Flicks to Watch on 4/20 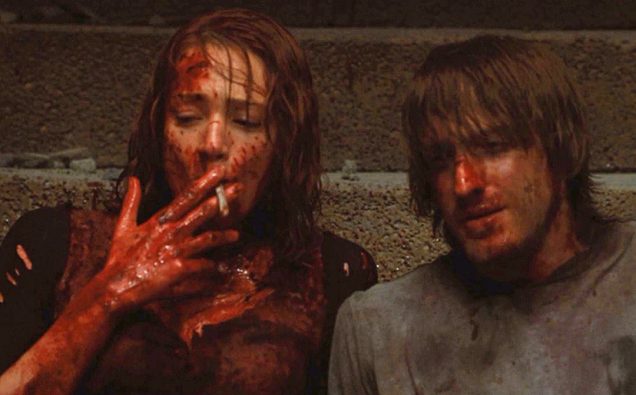 Smoking weed has gone from a socially unacceptable activity to a more refined lifestyle choice, with some states legalizing it. There are designer strains available, even some without THC, so we can be pain free without the high. 4/20 is right around the corner and for those horror movie fans that indulge, I decided to make a list of horror movies that I believe can make your 4/20 celebration a hit! (yes, folks pun intended)

Just to be clear as smoke, (see what I did there?) for those in the know, 420 is a vague way of saying you smoke weed and I guess that you are cool. There are many theories as to how that term came about. If you are interested, I found an amazing and detailed story on the origin of the term on Huff Post.

Compiling this list was a lot of fun. I went back through many of my favorite classics, and added a couple of newer films, to make this primo pot smoking list of horror films, guaranteed to fill your 4/20 with a bongful of joy! (I know, I’m loving the pot references) The list is in no particular order, and some are full-on weed-filled flicks, while most have shorter scenes where our hapless victims are hanging out in a cloud of smoke. These certainly do not represent all the horror films that feature weed, just a selection of my favorites. So, call some friends, grab lots of munchies, kick back, fire one up, and enjoy LA Zombie Girl’s 4/20 Horror Film List!

Starting out this list, I am pleased to introduce the newest addition to the horror weed culture; a little indie flick called: 4/20 Massacre!

4/20 Massacre is a full-fledged stoner slasher flick. A bit different because it has a mostly lesbian group of protagonists, this film has everything a pot smoking audience would want. A giant field of illegal ganja, a big creepy guy who is pissed off about anyone finding that field, a corrupt cop, sex, weed, romance, gory and clever deaths, weed, comedy and weed. This film just hit the VOD market April 3rd and is sure to be on any pothead horror movie list from now on.

The Cabin in the Woods – I love this film so much and it’s perfect for horror watching anytime. It’s complex enough if you want a movie that makes you think, or simply a film that makes you go wow, my perception of reality has just totally been altered! It is a homage to almost every horror classic ever made and totally makes your brain go into overtime! I’m in love with all the amazing creatures! I also think it’s perfect that the stoner is the first one to really get what’s going on. And that bong! Oh my God!

Shaun of the Dead – If you like getting high, playing video games, cold pints and zombies, this is the film for you. These two unlikely heroes take a hilarious ride through the apocalypse. This film is incredibly funny, with some terrific comedic moments, giving us tons of hilarious quotes and memes. It’s one of my favorite comedy zombie films and worth watching multiple times, stoned or not!

Friday the 13th – The summer camp from hell and beloved franchise has so many scenes of ganja partaking at Camp Crystal Lake that I just suggest picking your favorite and enjoying it with a bowlful. Part III has the most use of weed of them all, from stoners Chuck and Chili who are rarely seen without joint in hand! One favorite of mine was a more recent 2009 remake that I watched simply because Jared Padalecki from the TV show Supernatural was in it, (swoon) but had to appreciate that in this film Jason himself is the guardian of the pot-field! Friday the 13th flicks are horror classics, so you can’t really go wrong with any of them.

Freddy’s Dead: The Final Nightmare – One of the problems of smoking pot for some people is that it makes them sleepy. So, that being said, falling asleep inside Freddy Krueger’s house or anywhere in a Nightmare on Elm Street movie is a really bad idea. In this case smoking and taking a nap, puts our toker into a video game where only Freddy can win. Seeing Johnny Depp do the “This is your brain on drugs” PSA was pretty funny too!

Reefer Madness– Technically not a horror movie or even the comedy that I take it to be, Reefer Madness must be on any stoner horror list, just because of the craziness and how serious it takes itself. I doubt anyone ever avoided weed after seeing it, but they may have felt the need to dance uncontrollably. Known widely as one of the worst movies ever made, this propaganda film has been a pot smokers companion in a way I’m sure the filmmakers never could have foreseen. “Marijuana- The Real Public Enemy- whose use usually leads to incurable insanity!” Oh, my!

Idle Hands– There is a lot of pot-smoking to be had in this zombie flick. But despite seeming to be a movie warning you against the use of drugs, because it will turn you into a homicidal maniac, I think that’s what makes it ironic and the perfect film to watch stoned. Homicide is what happens as we watch a wasted teen who’s so perpetually baked that he doesn’t notice his parents have been slaughtered by an evil force that then possesses his right hand, taking on a wildly murderous life of its own after he chops it off with a butcher knife. There are lots of creative kills and zombified victims put back together with duct tape. It’s intended audience is definitely pot-heads, and is on many Halloween night must see lists, so it’s perfect to go here.

Hansel and Gretel get Baked- The witch in this stoner film has a new way to lure kids into her house- no candy for her- she has designed her own special strain of weed. Hansel & Gretel Get Baked is essentially a retelling of the classic fairy and is a horror-comedy if you want to get specific. Just like in the original fairy tale there is a moral to the story: If you are looking to score, only trust dealers who have reliable references.

This Is the End- This is the movie your mother warned you about. They talk about and go to just about every wrong place a movie can go, and it’s funny. I kinda felt like I would be going to hell just by watching this crazy, drug-filled apocalyptic tale! There is more stoner humor in this film then pretty much any other, as we watch the actors play depraved versions of themselves. Is it a horror movie? Oh yeah, there is gore!! This is the End should come with a warning label, or maybe rolling papers! Partake at your own risk!

Scary Movie- The Scary Movie franchise definitely has their share of pot smoking scenes. These horror parodies are just that- and are just ok films, but seeing the Ghostface turn into a smiley face and Marlon Wayans get rolled into a joint and smoked by his own pot plant was pretty funny.

Deathgasm is one of those movies that you have to watch stoned. I don’t even remember if there is that much pot smoking in it, just that it is a stoner flick hands down! In the film, teenage wannabe heavy metal rockers accidentally summon a demonic force, that takes over their small, conservative town with gory and hilarious results. It’s a terrific homage to 80’s slasher flicks and is a lot of fun to watch!

Sleepaway Camp II: Unhappy Campers– This is not a great film in my opinion, but it has the best stoner quote. When the psychopathic camp counselor, catches two young sisters smoking weed and having sex with one of the boys, she sets them on fire while warning them: “Let this be a lesson to you, say no to drugs!” That is some radical drug therapy!

I Still Know What You Did Last Summer– Not the huge box office hit as was the original, it does have a really cool pot-head scene. This stoner demise was of the always hilarious Jack Black playing a Rastafarian dude who smokes his last primo bowl of homegrown only to get impaled by his garden shears!

V/H/S– This horror anthology is pretty low budget and is filled with tons of sex, drugs and gore. The dead guy in the chair keeps moving around and gives you something to keep looking for. It is not bad for a found-footage type of film and is a perfect movie to watch stoned!

Halloween- Yes, even the most famous classic horror film had pot smoking. Laurie and Annie share a joint in the beginning of the film. I mean come on it was the 70’s! It just goes to show you that not every stoner in a movie dies. Annie got her throat slit by Michael Myers, but Laurie is still alive and well at this point in time! I’m pretty sure after that night, she smoked a little more!

So there ya go! Enjoy my list of 4/20 favorites. If you need more, I’m sure you can find stoner scenes to love in movies like Evil Dead, Attack of the Southern Fried Zombies, Cabin Fever, Evil Bong, Slumber Party Massacre, Texas Chainsaw Massacre, Slaughter High (with the highest stoner death count I’ve heard, but not seen) and so many others. Be safe dudes and dudettes but have fun!