The Glorious Return of Billy Fouls 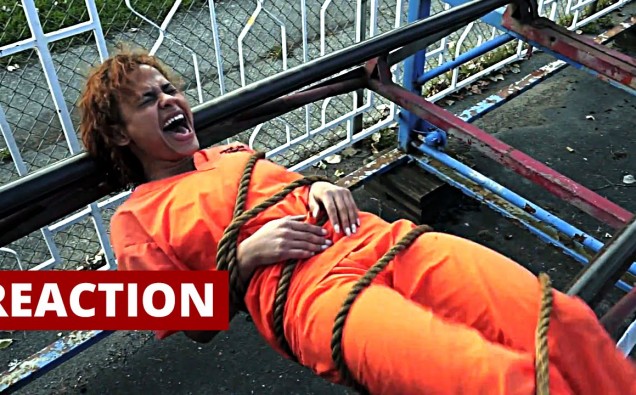 There are many types of humor out there in the world. There are witty jokes, prop gags, slapstick, even puns if thats your thing. But there is one more form of comedy; the gloriously, flat out f**king stupid. And as unrelentingly dumb as Bloody Island can be, with its assorted midgets and pot bellied serial killers, holy hell is it funny.

A sequel to cult hit Community Service, taking place a mere ten days after it’s predecessor, Bloody Island stars Bob Butterfield, a cop whose entire team was murdered by the insane killer Billy Fouls. Offered a paycheck he can’t resist, Bob decides to take one last job; escort a group of convicts to a run down carnival in the middle of a deserted island. However, Ol’ Bill doesn’t stay dead easy, and as Butterfield is about to find out, he sure as hell doesn’t forgive.

From the get go this is an indie slasher flick that has just about everything you could ask for.Creepy clowns, excessive violence, and a midget with more facial piercings than your average Black Veil Brides fan; there’s a lot to love here. Our cast is fairly cut and dry, but that doesn’t stop them from being a fairly funny lot. These aren’t exactly hardened criminals; four of them were strippers with a lap dance game so strong it gave their eldery client a heart attack. Not a bad way to go out honestly. With everything here that’s good then, what more could you ask for?

Well, a better run time would definitely be one thing.  This film is close to two hours long and it feels it. While there are a lot of funny one off gags, my favorite being one goat loving inmates penchant for petting zoos, in the end they just take up too much time. It takes almost an hour for the group to get to the amusement park, and even longer before Billy shows up. Some streamlining would have been much appreciated it. But when they finally do make it to the damn island, things start picking up.

I always thought amusement parks made for good slasher films. The bright colors and flashing lights make a great contrast with the grislier images. And Bloody Island’s amusement park,  run by a midget, a pinhead, and a drug addled clown is something special. The decaying rides and rotten food really bring out that carny atmosphere so many of these types of films lack. It doesn’t hurt that the killer is really something special.

Billy Fouls is a f**king maniac. More Freddy Krueger on meth than Jason Vorhees, Billy never shuts up, screaming, hollering, and hooting as he rips out intestines, gouges eyeballs, and beats a motherf**ker to death with a door. There’s not an ounce of subtly to his performance, but that is what makes it such a glorious spectacle of balls to the wall insanity. As a screaming Billy chases down his victims on a jet ski, big stomach and long grey hair flapping in the wind, I couldn’t help but laugh my ass off.

At the end of the day, this is a pretty good movie. A little long in the tooth maybe, but as far as independent slashers go, it’s one of the better watches out there. Now I just have to see where Billy Fouls shows up in part three. I’m rooting for a space station personally, but anywhere with that crazy motherf**ker is bound to be a good time.