Book Review: ‘The Girl With all the Gifts’

“Our Greatest Threat is Our Only Hope” 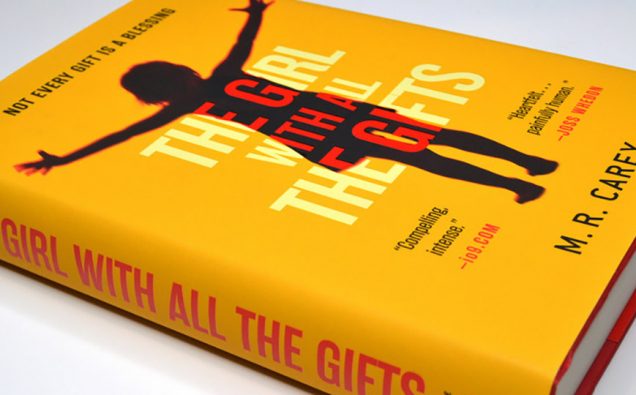 I know that when most people hear about this book and the soon to be released movie, they will say “Oh no, not another zombie story”. Well technically it is about a zombie apocalypse…but what an amazing zombie story it is! I just got done reading the book which, by the way, I had trouble putting down to do regular stuff, like eat, it was that riveting for me. The novel, “The Girl with all the Gifts” is less a zombie story and more of a study about humanity itself versus science. Written by M.R. Carey who is the acclaimed writer of Lucifer and Hellblazer, “The Girl with all the Gifts” is now a feature film that will be released in the UK and Hungary in September 2016. No dates set at this time for a U.S. release.

The book starts in a dystopian future (not too far ahead- 20 years) where it seems that most of the world has been destroyed because of a fungal spore that takes away a person’s ability to be human and turns them into flesh eating zombies called hungries. We begin at a military base in rural England where a group of unusual children are being studied. This group of children are different from the regular hungries who are just eating machines, these children were observed still possessing human traits and abilities. For the scientists at the base it is interesting because they are so different from the brain dead killers wandering the streets, could they be the basis of a cure? They are brought to the base to be taught like normal children, to test their intelligence and kind of see how they tick. They are still hungries though, and the key is not to let them smell you. Usually a school teacher like Miss Justineau doesn’t have to wear a special chemical blocker, so they can’t smell her, and have her students strapped into chairs so they can’t get to her and have her for lunch. The children disappear from time to time when scientist Dr. Caldwell takes them into the lab to dissect and study their brains. One of the children is very special to Miss Justineau and Dr. Caldwell. Little Melanie is a genius and doesn’t really know that she is different. Miss Justineau has an attachment to this brilliant child and Melanie in turn loves her back. Dr. Caldwell thinks Melanie is special too, but for much more clinical and scientific reasons. When the hungries overrun the base and a small group led by Sergeant Parks gets away, we see the battle for humanity: what is the difference between a monster and a human? Where is the line? What will happen to the planet? Is Dr. Caldwell doing the right thing in her quest to find the cure?

“Melanie is a very special girl. Dr. Caldwell calls her “our little genius.” Every morning, Melanie waits in her cell to be collected for class. When they come for her, Sergeant Parks keeps his gun pointing at her while two of his people strap her into the wheelchair. She thinks they don’t like her. She jokes that she won’t bite, but they don’t laugh.”

If you are interested in the fungus behind the story- its actually a real thing. The book’s hungries are commandeered by a mutant version of the fungus Ophiocordyceps unilateralis – which you may know as the parasite behind “zombie ants.” As the novel explains, an infected ant is hijacked and forced to “climb to the highest place it can reach—to a leaf fifty feet or more above the forest floor.” From there, the fungus bursts forth from the poor ant’s head in the form of a sporangium that allows “thousands of spores” to “spread for miles,” with the help of the wind. In the book the hungries eventually burst, and out grows a giant plant with the seeds attached, ready to be spread. Sounds pretty cool, but deadly.

“The Girl with all the Gifts” was a terrific yet emotional book and a super-fast read. It was more intelligent than most of the young adult books that are the usual apocalypse type books. We learn about the social dynamics when a society collapses, more than about people just getting eaten by zombies. There is also to consider the dilemma I mentioned earlier; What makes a human worth saving and what makes them a monster, a specimen to just dissect and look at under a microscope. We have trouble picking sides in this book, there is a certain amount of truth to both beliefs, there is not a clear right and wrong. And then there is love, love that always brings us back to our humanity.

I’m really looking forward to the movie, which I hope will be released in the US soon. From the trailer it really looks amazing! If you like reading though, get the book long before the movie. You will not be disappointed.

The film cast looks really great. Miss Justineau is played by Gemma Arterton, Melanie by Sennia Nanua, Dr. Caldwell is portrayed by the great Glen Close, and Sergeant Parks by Paddy Considine, just to name a few main characters. They changed a few things (like ethnicity) from the book, but that happens a lot. 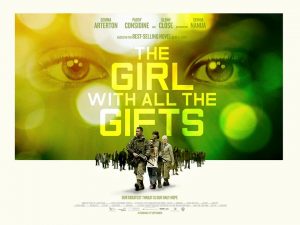