‘Bornless Ones’ Unleashes the Demons on us all

"Only Evil Will Survive" 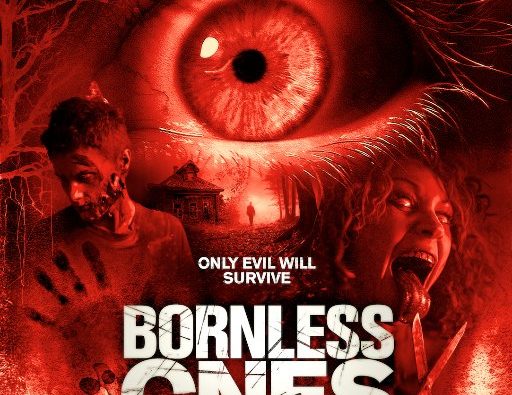 When I got invited to go see the new indie horror film Bornless Ones, I went knowing that the writer/director/editor himself, Alexander Babaev had credited his inspiration to Sam Raimi’s The Evil Dead films. Well I am here to say how much I loved the movie and definitely suggest that if you get a chance to see it, that you do so. Bornless Ones is available on most of the VOD sources, so you have lots of ways to see it. But if you are reading this, you may be asking why should I see it? OK, let’s talk about the movie. 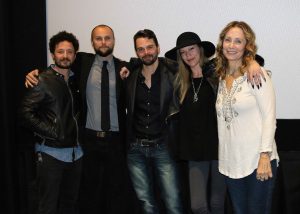 Synopsis: “Having just moved to a remote home near an institution to better care for her brother Zach, Emily invites a few friends over to help her unpack. They soon discover strange symbols etched into the boards on the windows. In an effort to clean the house they clear them away, soon realizing the gravity of their mistake as they one by one become possessed by an evil force.”

Bornless Ones is a movie about demonic possession first and foremost and we see that in the very first flash-back scene, that sets up the premise. Moving forward in time we are introduced to Emily (Margaret Judson), who has purchased an abandoned-looking cabin in the woods. Emily wants to take care of her brother Zach, (Michael Johnston) who has Cerebral Palsy, instead of putting him into an institution. Taking care of her brother has put a strain on her relationship with her partner Jesse (Devin Goodsell, also one of the producers of the film) who resents the attention she gives to Zach. Now, right off I always wonder why people want to be far away from everything if they have a difficult life situation. Aren’t there perfectly good hospitals and homes in big cities? Where are they going to find employment? Why is the closest grocery store always at a gas station? I know that’s how these movies work, but I always wonder. You need the creepy cabin in the woods, a remote location where no one can hear you scream. It’s required to have symbols that you don’t pay attention to till it’s too late, and the basement full of strange, dusty stuff, to make the demons come out! It’s in the demon rule book, I think. But having said that, it isn’t because I’m making fun of the film. Bornless Ones, takes some well used horror tropes and makes them fun, scary, gory and incredibly watchable!

One of the main reasons I loved this film is the acting. Demon films can very easily (and usually do) be waaaay overacted and get silly and cheesy fast. In Bornless Ones, this didn’t happen, and I enjoyed the chemistry between all the actors and felt real empathy with a couple that was trying to stay together despite the stress caring for a sick brother is causing. They bring along another couple to help them move in, so we get some partying, a bit of nudity and more people for those nasty demons to possess. And possess them they do. Foul mouthed and mean, the demons take you over, only if you are injured and you invite them. But they are tricky and make you see things that aren’t real, so you injure yourself or the people around you. (As grossly as possible of course!) Demons are always over-the-top acting challenges and our cast does it superbly. Zach starts out very sick and mysteriously seems to get better. Some very challenging acting for Michael Johnston to pull off as he plays basically three versions of himself. While he gets better, Jesse and their friends Woodrow (Mark Furze) and Michelle (Bobby T) get worse and are quickly and cleverly taken over by the demons.

At this point we get some awesomely disgusting practical effects, perfect for us gore fiends! When the demon-possessed, and seriously injured Woodrow pulls out the drill to fix himself, well the whole audience gasped! Kudos to the very talented SFX work, on a very small budget, by Kristina Ellery and her team.

The cinematography was well done, the editing tight and the movie had a reasonable running time at 80 minutes. I really enjoyed the twist at the end too. Without spoiling the plot, let’s just say there was a definite role reversal extraordinaire, and our empathy for one character moves to another. Well done! 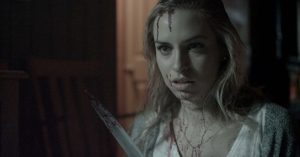 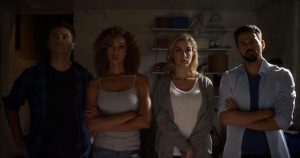 At the premiere, when asked what made this movie different from all the other “cabin in the woods” type of movies, actor/producer Devin Goodsell shared that they came at it in more of a psychological way. “We wanted to bring in more of the mysticism of it. A lot of what you see was taken from the real ‘Goetia’, so it is all legitimate things. The original name of the film was called ‘Goetia’, which is roughly translated to a practice of invocation of angels and demons and tied to the Book ‘The Lesser Key of Solomon’ which has a section of Goetia for 72 spirits. These spirits possessed different abilities when summoned. The symbols and the names of demons were represented in the film, but we only featured 5 of them. The Bornless Ones is meant as those unborn spirits never given the chance of life that exists as demons or angels and illustrated throughout the film as the demons.”

“We also wanted to make these characters more three dimensional” Devin said, “than people who were there just to have a party, get stabbed and killed. We wanted to have a back story and have more reality to it, more real-life problems, so that it was relate-able. The characters were in the middle of their lives, trying to get things together. We wanted it to resonate on the level of a 90’s horror film.” 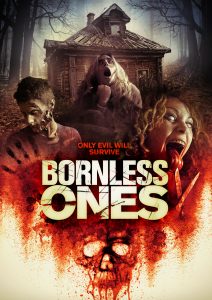 I think Bornless Ones was successful on many horror levels, I liked it way better than The Evil Dead (sorry fans) and I hope you take the time to seek it out and watch it! Even if you are not a fan of The Evil Dead movies, I think you will enjoy it! For more info go to their Facebook page or their Website. It’s available now on Amazon.com, iTunes, Vudu and Google play.