Brenton Foale tells us the deal on “Deal”

Recently I became aware of upcoming horror/thriller “Deal”, written and director by Brenton Foale. I got in touch with Mr. Foale to get the scoop on the film. Here’s... 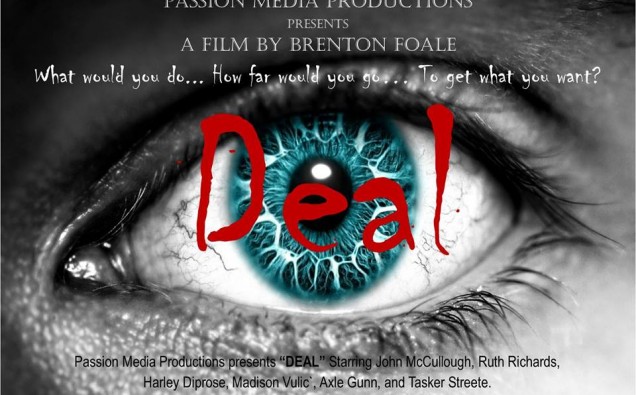 Recently I became aware of upcoming horror/thriller “Deal”, written and director by Brenton Foale. I got in touch with Mr. Foale to get the scoop on the film. Here’s how it went!

John Lepper: Thank you, Mr. Foale, for taking the time for this interview. So, you are putting together a horror film called “Deal”. What can you tell me about it?

Brenton Foale: It’s a horror/Dramatic Thriller about 4 people who each have personal problems, and they try to find a way to fix their issues. They have each heard of a guy who is a “fix it” man, and they end up against each other, destroying their lives, and the lives of those they care about. Their deceipt, desperation and destruction culminates in a climax of chaotic proportions.

JL: Interesting. It certainly sounds like an original plot. Do you draw on any other films for inspiration? How did this story come together?

The story is certainly original. Lots of plot twists, and blood and scares!
JL: Sounds great! So, what is your end goal for this film? Best case scenario, are you going for DVD, streaming, theatrical release? Where do you want this film to go?
BF: We have some big news to announce soon, but I cannot announce it just yet. But we are aiming high.

JL: Great! Sounds like you have some awesome stuff in the works! But first we have to get there. You’re doing a crowdfunding campaign for the film right now. Any cool perks?

JL: You’ve got some really good ones there for reasonably little investment! That’s great! Well, this movie sounds really cool and I can’t wait to see it when it’s done. Thank you again for your time. Before I let you go, do you have anything else you want to tell the readers?

BF: We have a great cast on board, including Axle Gunn who has just finished filming Red Sky, John McCullough from Cardinal Sin, David Argue from Razorback, and so many more

We’d love your readers to pledge and share our pozible campaign, if they will. It will be worth their while in more ways than they can imagine.

JL: Sounds like a great cast! And we encourage our readers to contribute what they can to help make Deal happen! Thank you again for your time, Brenton, and best of luck in your endeavors!