Because, hey, kids deserve infinite, unending madness at the tentacles of a space god too! 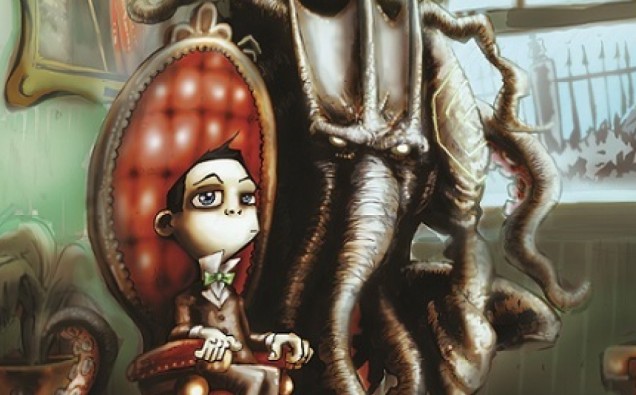 Dr. Seuss is dead and this leaves a void that can only be filled by the unending madness of the Old Ones. Championing this glorious task is one Bruce Brown, author of a series of Lovecraftian children’s books. I interviewed Bruce on the subject. Here’s how it went!

John Lepper: Thank you, Mr. Brown, for taking the time for this interview. So you are an author of children’s horror books based on Lovecraft stories, correct? How did you come up with such an idea?

Bruce Brown: I wrote a short story for a horror anthology and thought about taking some creative license with the fact that Lovecraft’s father had a breakdown. I put him there as a child and added a Lovecraftian twist. But after the story came out I couldn’t let go of the idea of Lovecraft as a child and thought it would be interesting to blend his work with real facets of his life in a story. So, that is where Howard Lovecraft & the Frozen Kingdom began.

JL: Ok, cool! So, how does one go about making Lovecraftian lore kid friendly?

BB: Well clearly I had to dial back some facets to make it accessible to kids. To do so I needed to make Lovecraft be appealing to kids. So, he is sarcastic, funny and a little reckless. I took Cthulhu and made him a character that watches over Howard. Truthfully their relationship became what made it so accessible to kids I believe. In a way they are like an old married couple that argues all the time as Howard drags him along on these adventures. It just became a fun a ride.

JL: For some reason this brings to mind a more macabre Calvin and Hobbes. In any case, it sounds awesome! So, how many books are in the series so far?

BB: It is so funny you say that. I had several reviewers say it was like a macabre Calvin and Hobbes! Ha! There are three books in the series and it was just released in a compendium hardcover that contains the whole trilogy called Howard Lovecraft and the Three Kingdoms.

JL: Ok, so you say it’s a trilogy. Does that mean it’s already reached it’s end or will there be more adventures for Howard and his tentacle-faced pal?

BB: Honestly I hope there are more. As always it depended on sales. So I hope to tell more Howard stories. Currently I am working on another children’s Lovecraft story. Working on making ReAnimator for kids.

JL: Can you tell me anything on how that is going? I’ve always been a big fan of Herbert West. How are you applying the same process to him?

BB: It is hoping to wrap production by the beginning of summer. I am a big Herbert West fan. I wanted to tell the story of Herbert as a child. Basically he is a genius who gets bored and eventually tries to reanimate the dead. While making his “formula” he is eating one of the town’s delicacies which are like donuts. He reanimates the dead who begin to tear the town apart in search for these sweets. Herbert races to stop this before they eat all the treats and their hunger is turned on people. It is alot of fun! I actually had a different version of Herbert West show up in the last Howard book and had so much fun with him, I had to do a book with solely him.

JL: Sounds like tons of fun! So, it carries on a bit from the Howard stories, then?

BB: No, in the last Howard story, it is Herbert West grown up. This is when he is a child. I introduce that he actually had a sister who is the story’s narrator. So this is a brand new book.

JL: Alright, gotcha. Well, these sound amazing! Thank you again for taking the time for this interview. Before I let you go, do you have anything else to share with the readers?

BB: Absolutely, currently the first Howard book is going to be an animated movie so people can go on youtube and search Howard Lovecraft & the Frozen Kingdom teaser! Also, I wanted to say thanks to the Blood Shed for talking with me.

JL: Not a problem at all! It was my pleasure. Sounds like a great project and we at theblood-shed wish you all the best! We’ll include that teaser at the bottom of the article!

BB: That would be great!! Want to spread the news of this little Howard.

JL: It definitely sounds like it deserves it! Thank you again and have a good one!

BB: Thanks again and you too!