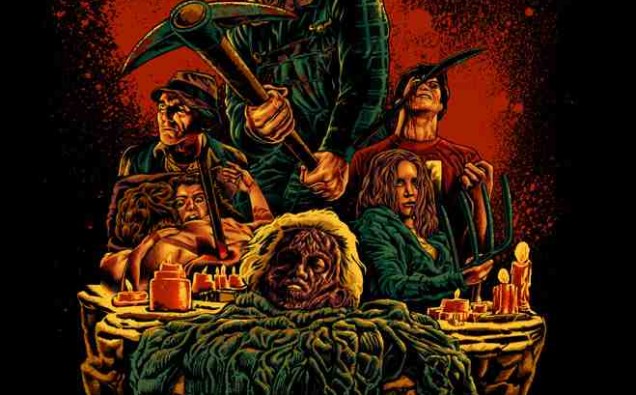 “Welcome back to our coverage on Friday the 13th. Todays topic: Part 2, A.K.A the one where Jason runs around with a bag on his head. Without further to do, this is 1981’s Friday the 13th Part 2!”

After taking a significant cut of 1980’s box office with a competitively low budget, it only makes sense a Friday the 13th sequel would be pumped out as quickly as possible. Enter 1981’s Friday the 13th Part 2, a film that probably should have been a hashed together piece of crap, but ended up a superior product to the original in just about every way. This ain’t Citizen Kane, but as far as Friday films go, Part 2 is a real highlight. More boobs, more blood, and of course, GODDAMN JASON MOTHERFUCKING VORHEES!

Thats right: here we finally have the debut of one of cinema’s  most infamous mass murderers. No longer is he the stupid looking zombie baby from part one: now the campground killer is mean, lean, rippling with muscle, and pissed as hell. Carrying his mom’s head around with him and dispatching every dry humping, drug using teenager in his way, Jason’s debut is triumphant.. but he still isn’t the iconic figure that’s yet to come.

For starter’s, Part 2 actually plays around with the mystery aspects of the original; its not until the third act we know for sure it’s Jason doing the killing. Lot’s of first person shots, conveniently placed trees, and close up of hands keep the identity of the murderer “hidden.” Nowadays Vorhees is so ingrained in pop culture that your senile aunt Doris could pick him out of of a line up, but at the time no one knew for sure who the killer was. While Jason’s name is mentioned, there are enough red herrings to keep viewers guessing.

When Jason finally does show up, he’s missing his two most famous accessories; the mask, and the machete.  Vorhees gets a few good whacks in with his famous blade (including a fun one that knocks wheelchair bound mark down a flight of stairs), but he spends most of his screen time wielding a pitchfork of all weapons. It’s actually a pretty original idea, but when I see a pitchfork, Farmer Dan and his good ol’ boys playing in the hay come to my mind, not a terrifying murderer.

And unfortunately, the series single most iconic image is still M.I.A: the hockey mask. Instead Jason runs around with a burlap sack over his head. Apart from looking stupid, it’s pretty much completely ripped off oft-forgotten classic The Town That Dreaded Sundown. 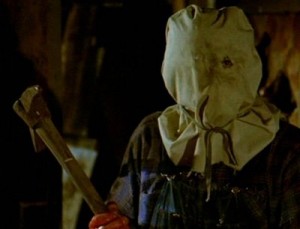 Here we have Jason

Here we have the murderer from The Town That Dreaded Sundown. Seriously Friday the 13th Part 2, what the hell?

The cosmetics and wardrobe of Jason aside though, Part 2 is a pretty damn fine film. Featuring a diverse cast of new victims and returning stars, good kills, and some of the series most iconic moments, its an extremely solid entry.

Part 2 picks up where the original left off; Alice Hardy, the only survivor of Pamela’s rampage in the previous film, is having a rough time of it. Nightmares, hallucinations, and all the other standard side effects of watching your friends brutally murdered by a crazy woman, are coming on the poor girl in spades. It’s not long before Jason shows up however and cures Alice via ice pick to the temple (a messy method, but efficient.) With his mothers murderers all dead, Vorhees heads back home to his shack, living off the wilderness and killing anyone unfortunate enough to trespass.

Camp Crystal Lake itself is much the same as we last saw it: Crazy Ralph is still riding around on his bicycle, yelling about death curses and doom, the locals are as unhelpful as ever, and teenagers are stripping buck ass naked and smoking doobies. The same old shit as ever, to put it less elegantly.

Ralph, for his brief screen time, continues to be a highlight, with an hilarious scene of the old pervert watching young couple Ginny and Paul getting it on proving to be one of the series funniest. Pamela returns as a decapitated head that Jason uses as a “Gotcha Gag”, with the decaying noggin spending its time shoved into refrigerators and as a place on a make shift shrine. 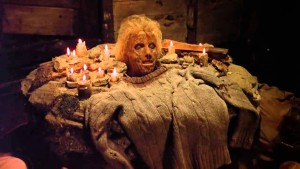 Other than that, business is much the same as in the first film: except better. The kills are more creative (lovers speared through a bed), the skin is more on show, and Part 2 wastes no time getting down to business, with the first kill coming only a few minutes into the run time. Couple that with some iconic scenes like the burlap clad Jason smashing through the cabin window, a pitchfork smashing through a car ceiling, one of the series most truly chilling endings, and you have a winner of a sequel. Compared with some of the crap that is yet to come (“cough” Jason Goes to Hell “cough”), this movie is a damn masterpiece.

And in it’s genre, that’s exactly what it is: a masterpiece. Slasher films get shit on a lot, and not without good reason, but movies like these show that the genre can produce quality films with all the elements fans love. Gimmicks aren’t always necessary: sometimes all it takes to make a great film is a big motherfucker with a burlap sack and a pitchfork.

Well, that’s it for Part 2, one of Friday’s truly finest films. Join us next time right here at The Blood Shed, where we get to watch Jason go “3D” in some of the most awful, dated effects I’ve ever seen; so basically a rip roaring good time. Stay tuned gore hounds, and keep those machete’s sharp.

Jeff is a writer for The Blood Shed and eats, breathes, and bleeds horror. You can help him write his first book here