Ah, Cannibal Holocaust. A truly polarizing film. Some consider the film an essential horror classic. Others? An overrated mess. Having just watched the movie about a week or two ago,... 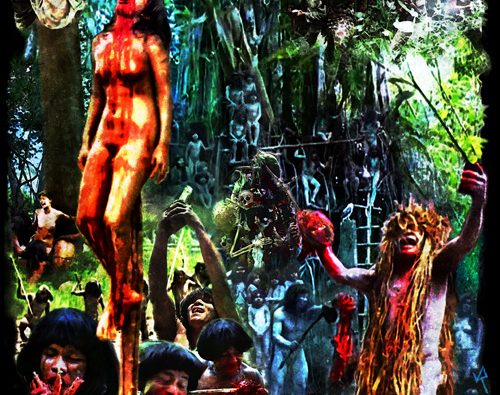 Ah, Cannibal Holocaust. A truly polarizing film. Some consider the film an essential horror classic. Others? An overrated mess. Having just watched the movie about a week or two ago, I felt compelled to write about it. Technically it wasn’t the first time I’ve seen the movie. I had watched a portion of it with an ex-girlfriend years ago. But we both fell asleep drunk before we got to the MEAT of the film. Don’t read on if you haven’t seen the film. It is a movie that is best experienced to fully grasp. So stop reading if you haven’t yet seen the movie! Go watch it. 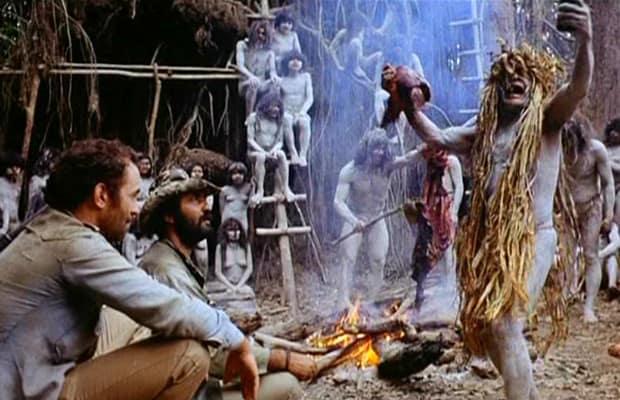 One of the main things cannibal holocaust is remembered for is the controversy surrounding the film. Real animal deaths were captured on film. Real human death was also shown. The actors and actresses were contracted to stay out of the media for a year after the film’s release. This was to give the film’s subversive nature even more weight. Ruggero Deodato was actually arrested when the film was released. It was that effective. He later had to get the actors to appear in court to prove they were alive and well.

But why was the movie so effective? The Blair Witch tried to recreate the Cannibal Holocaust marketing model. While it was a huge runaway success and became the poster child for the found footage genre, it was obviously a marketing campaign. Compared to Cannibal Holocaust, the Blair Witch might as well be a Disney flick. The Blair Witch was a novelty film. Cannibal Holocaust was the real deal. The real animal deaths, though controversial, messed with the audiences mind. The turtle dismemberment will forever be etched in my brain. The muskrat creature that is stabbed in the throat twice caused me to wince. But Ruggero argued these animals were going to be eaten by the local tribes. He filmed the acts, not endorsed them. He also made the point that a lot of the food we eat die in similar fashions. Are we the viewers hypocrites? Fair enough, Ruggero.

Real human death is also shown. There is no actual cannibalism on screen. But archived footage of an Uganda firing squad is put into the film.  It is shown as a documentary within the film called “The Last Road to Hell.” And that is when the movie’s narrative takes a turn.

Once you make it past the initial set up of the movie, the narrative shifts from the first person perspective. The rest of the movie plays in a third person perspective. We watch as the main character watches the “lost documentary footage.” But as more footage is unveiled, the twisted nature of the documentary makers are revealed. The climax of the film, arguably, is not the animal deaths. Nor is it the cannibalizing of the fictional documentary crew. The climax is when a tribe is corralled into a straw hut like cattle. And then the documentary makers set fire to the straw hut. They guard the exits with guns. The theme song of the movie is thrown over this scene to great effect. When the movie opens, a delicate acoustic guitar motif plays as aerial footage of the jungle is shown. It feels like a wink to the viewer. In the later context the song takes on a new meaning. Now it’s almost mocking the viewer. “You’re enjoying this, aren’t you?”

Despite the exploitative nature of the film, it works as a great commentary of exploitation films. Layers upon layers of subversion. The message in Cannibal Holocaust will be in your head for days after watching the film. But what the hell is that message, exactly?! That’s something viewer can determine themselves. And while the animal deaths can be hard to watch, I don’t think Ruggero was wrong for capturing on film what would have transpired regardless of his intervention. The movie is a gem of cult horror and a must watch for fans of horror and gore hounds alike.