Carpenter In Concert – This Fans Sincere Thank You 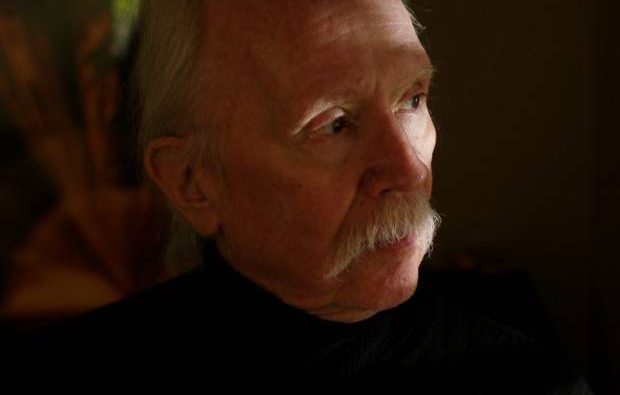 On Thursday June 23rd, at the ACL Live Moody Theater, Austin Texas played host to the legendary film director John Carpenter and his Lost Themes Live Retrospective.  Regularly selling out venues along the tour, Austin itself was near capacity with genre die hards gathering to see one of the biggest names in Horror.  As I’m making my way to the spectacular seat my brother Eric gifted me when tickets were first made available, I found myself uncontrollably smiling from ear to ear.  Magically it seemed as if the sea of Slasher fans parted just for me to make my way into the auditorium.  I sat comfortably on the left side of the stage, surprised and satisfied with my vantage point, and waving to my friends throughout the crowd who were also smiling widely.

The live performance promptly began at 8p.m.,with the six piece ensemble climbing out into the spotlight, Carpenter exuberantly taking center stage behind his beloved electronic keyboard, which has held us all captivated with his entries into the annals of filmmaking.  Often encompassing multiple creative capacities, such as director, producer, writer, and composer John Carpenter has delivered us the goods time and time again, making it easy for many to confidently claim him as a Master of Horror.  He nearly single handedly ( with the valuable assistance and creative input of partner Deborah Hill ) made an unforgettable mark upon Hollywood, putting Horror on the map.  Halloween was a fucking game changer, stunning movie goers worldwide, initiating one of the most successful franchises, ever, helping carve out a new sub genre back in the late seventies – the Slashers.  The significance of this mans legacy runs deep, this becoming evident with the other influential individuals present at the Moody Theater. To name just a few, I noticed Texas’ own renegade filmmaker and El Rey Network founder Robert Rodriguez sitting in front of me, and down towards the end of the aisle was Ain’t It Cool News founder Harry Knowles.

The stage lights go red illuminating the group before us.  Before I knew it, the soundtrack to many of my genre mainstays was under way.  The performance auspiciously began with the theme from the unforgettable Action Sci-Fi flick Escape From New York. My heart soared as I noticed the screens behind the musical ensemble were pairing the perfect clips from the film to the live performance including the accompanying stage lights and effects.

It was surreal to be witnessing such an inspiration to me, to perform some of the most quintessential themes of Horror, tunes that have been burned into my book of memory.  Earlier I mentioned Robert Rodriquez was in attendance, and I paused to think how wonderful it was to have such a massive horror hero of mine up on stage and to have another hero of mine, sitting here thoroughly enjoying and celebrating this experience like the rest of us.  Perhaps he too, was reflecting back upon his personal Carpenter influences which prompted him to dive into the world of Independent filmmaking, creating his own scores to his own celebrated films.  It was a profound thought for me, momentarily getting lost in this, but the heavy synths and sharp digital drum rhythms ripped from the violent film Assault On Precinct 13 snapped me back into the now.  This particular movies theme is a solid favorite selection of mine, borrowing sounds from the Industrial musical genre, its score aimed to infiltrate the psyche and burrow in with its rapid, deep, dark and destructive bass line.   A possibly inappropriate chuckle came from me when one of the clips selected for Assault On Precinct 13 was the surprising shot gun blast to the chest of a young pig tailed girl.  I approved tremendously of the projected scenes from this unparalleled addition to the directors film catalog. 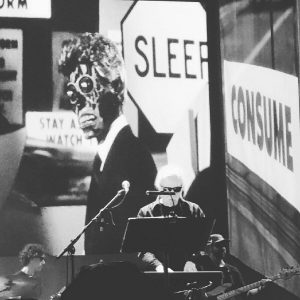 As the third selection began, a piece entitled Vortex, from the first Lost Themes album, it became very clear how extremely talented each member of the band was.  Passionate professional musicians, gratefully and expertly pouring their talents into their individual instruments.  A look and feeling of genuine artistic satisfaction was upon each of the gentlemen’s faces.  These guys really connected with each other too, presenting a flawless almost unbelievable quality of live music.  The meaningful renditions of the musical tracks were at times almost trance inducing.  Mr. John Carpenter was into it guys, feeling the music, shamelessly and confidently, you could note these tunes and chords have coursed through every fiber of his being for many moons. 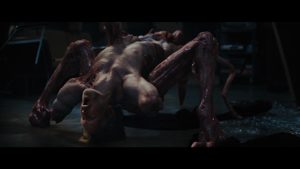 For a few brief moments, the filmmaker spoke to the crowd.

Us in the audience fanatically cheered to his statements, perfectly transitioning to his film The Fog.  It’s a beautiful and haunting score, setting an appropriately heavy tone for the transpiring events of the story, and as if to switch gears, a little lightening of the mood, the group on stage all put on those trademark black shades, to perform the fan favorite theme of They Live starring the late great Rowdy Roddy Piper along side Keith David.  Behind Carpenter, in the recognizable bold, simple, generic black and white letters….

They Live‘s theme always reminded me of a salty Western showdown between worlds.  This night, an added jazzy solo synth piece was executed incredibly well by Cody Carpenter, the filmmakers son.  Magical.

Following suit with the fan favorites, the next performance was very well received.  Serving as a Mecca of sorts to Special Effects gurus, The Thing has stood the test of time, continuing to wow audiences to this day.  This movie really impressed me when I was younger, and has always had a special place within my heart.  I found myself transfixed on the images from The Thing playing out on the large screen, reiterating the viewing impact the movie has, at least upon me.

Throughout the concert the legendary creator was swaying and grooving, engaging the audience and having what seemed a damn good time.  Just when I got a grip of myself, to fully be in the moment and enjoy it, those remarkable, iconic clacking of the piano keys rang out like a calling to the faithful horde of Horror fans.  The crowd fucking erupted for the Halloween theme.  It really was something else to experience this, the dark and constant synthetic bass tone penetrating my geeky gore loving body.  I’m not ashamed to say, tears welled up in my eyes folks.  Because I was in the moment then, experiencing and enjoying the fact I was fully aware I was bearing witness to such an undeniably driving, creative and innovative force in not only Horror but Film and Music.

The first encore was the unholy, ominous tones representing The Prince Of Darkness.  Hearing this live will most likely be one of my most cherished moments I take from this lifetime.  An unprecedented treat.

The final and 14th live rendition from one of the Greats films was one I wasn’t expecting, but overjoyed to have them include on the nights set list.  Carpenter thanked the audience for coming out, for being loyal Horror fans and to please drive safe, because Christine was out there tonight, prowling the streets.  The dreamy and hopeful musical measures from the classic genre film focusing on a classic killer car, was a memorable way to close the epic evening.  It evoked the fiery determination to also create, which I began to think was lost.  This evening, coupled with the much needed and much appreciated connection with a lovely young lady as of late, helped catapult my spirits and creative endeavors.  This was much more than simply an outing at a concert, it was an audio visual rekindling of my creative totem animal.  What was paid for admission greatly pales in comparison to the value of what was reawakened.  From the very bottom of this fans heart Mr. John Carpenter and musical mates, I thank you.