Rev up your chainsaws! You can't talk indie horror without talking Chainsaw Sally! 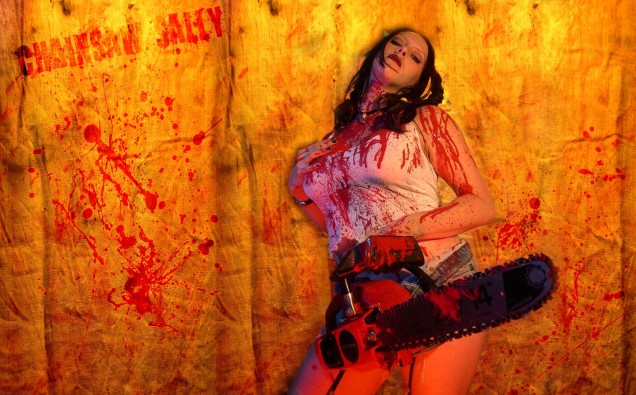 We at theblood-shed are dedicated to the furthering of the indie horror genre. And, well, you simply can’t talk indie horror without talking Chainsaw Sally! From movies, to TV shows, to an upcoming cartoon, you can’t find many indie horror franchises that have made more of a splash! This morning, I caught up with April Burril, the actress who plays the chainsaw wielding anti-hero. Here’s how it went down!

John Lepper: Ms. Burril, I want to thank you for this opportunity to interview you. We at theblood-shed are all about indie horror. And, well, as I said in the email, you can’t talk indie horror without talking Chainsaw Sally. How did it all begin, though? What made you want to make horror films?

April Burril: Thanks for having me! Always happy to encourage the indie horror habit! How it started…. well, it began with live theater. I joined a theater group run by Jimmyo that performed original works written by himself and Jamie Taylor. The main show was called Silver Scream- basically, a trip through horror movies from Nosferatu all the way up to slasher flicks – very very VERY fun! After several years of that, we decided to make a filmed version of the Silver Scream musical and had so much fun working w/ film, that we shifted our interest fully into movie making.

JL: Wow! I had no idea, to be honest. It’s interesting how many horror actors I interview end up having some sort of theatrical background or training. I myself am a graduated theatre major and I think it’s really interested how horror has invaded the medium. From Evil Dead the Musical to the stage performance of American Werewolf in London, it’s an interesting time for theatre right now.

So, how did Chainsaw Sally come about?

AB: Chainsaw Sally, the character, actually existed before the movie or the shows. She was created as a kind of horror hostess to draw horror fans to com see Silver Scream. This was before the trend of horror movies hitting the stage, so it was super-difficult to convince horror fans that seeing a musical was actually a great idea. After the Silver Scream film was released, we were looking around for the next project and – since many Sally fans already had asked about a movie – it only seemed right that we should make one.

Now, as an actress, what goes into the performance of the character of Sally? Do you have a method? It’s an interesting role in that it is essentially two characters, Sally in public and Sally being her real self. What goes into making it happen?

AB: Actually… it’s 3 phases – “Librarian Sally”, “Killer Sally”, and “Sally at Home”. Sally at home is really barely acting at all…. pretty much it’s me w/ the volume turned up. Same could be said for Killer Sally to some degree… I just access a combination of seething rage and hysterical glee that most people manage to keep caged down in order for us all to function as a somewhat sane society. The most difficult to play is actually Librarian mode. This is Sally trying to blend in to the regular world – unnatural for both her and I. So the result is quiet and a little awkward. Very appropriate.

JL: That’s awesome! It’s cool to be able to play a character that fits who you are and it sounds like Sally fits you at least 2/3 of the time. And it’s interesting, I believe I have heard Robert Englund give similar reasoning behind Freddy that you give for Killer Sally.

Looking into the future a bit, Sally has made tons of appearances already, but she’s about to make the jump to cartoons. What can you tell me about the upcoming Chainsaw Sally animated series?

AB: First off…. that it’s going to be SO AWESOME!!! and FUN!!! I can’t wait to get started on it! Jimmyo has been designing characters and working w/ Patrick Storck on writing. We’ve also had a few preliminary meetings w/ our film friends to hash out ideas and plot lines. And, I will say, it is some of the funniest stuff I’ve heard in a while. That’s one way this will differ a little – though there’s still a horror theme (of course, since Sally is killing people by the truckload), there is a lot more emphasis on the humorous side. Working with our managers at Bloody Bombshells, we’ve managed to bring on some major voice talent and more keep lining up, wanting to be involved in the project. Namely – Christopher Judge of Stargate fame (woo! what a great deep voice to add to… well, I know who he’s going to play and I’ll just leave it at that…) and…. *drumroll* Nicholas Brendon!!! (YES! Xander in the Buffy the Vampire Slayer series) to be playing RUBY!!! (among other things, since we will all probably be voicing multiple characters).

Ok, last question before I let you go. We all know that Sally’s favorite horror movie is TCM. What’s yours?

AB: Well… TCM. Though there are quite a few that make the top of my list. And horror is so multi-faceted that I can’t really nail down one. The Todd Browning Dracula is definitely up there as well (oh, Bela!). Also, Return of the Living Dead, American Psycho, and more and more and more.

JL: There are indeed a lot of good ones. TCM is one of the greatest indie success stories, so it holds a special place in my black little heart too.

Alright, before I let you go, do you have anything else you want to tell the readers?

AB: Hm…. Keep watching and supporting indie horror! Sometimes you have to look past low budget issues and see the stories that are being told, but it’s almost always worth it. Creativity is born in adversity and few know that better than independent filmmakers. If you are one – keep at it!! If you have a great idea – finish it!! And thanks for listening to me… and… keep an eye out for the Chainsaw Sally animated series slated to be shown on Netflix!

JL: That’s what it’s all about! You won’t find more creativity anywhere in the film industry like you do in indie horror! Thanks so much for this opportunity to interview you! Can’t wait to see what’s next!

Want to see more Chainsaw Sally? Well, tune in to our live stream broadcast of theblood-shed.com’s Golden Rake Award for Indie Horror ceremony where April Burril will stream in as a special guest! Check out deets HERE!!!