When I saw Parasites, I must admit going in, I began watching the movie with the assumption that giant parasitic creatures would be eating flesh or something equally as... 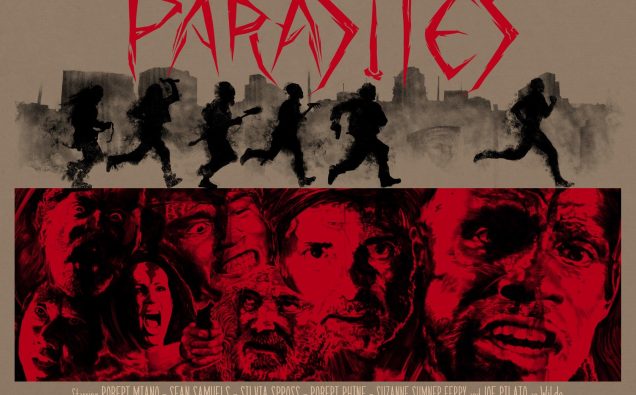 When I saw Parasites, I must admit going in, I began watching the movie with the assumption that giant parasitic creatures would be eating flesh or something equally as gross. But wow, I was so far off the mark!

Parasites turned out to be a survival thriller, on the streets of LA’s Skid Row area. But that being said, it wasn’t just a monster chasing after someone, there was also some serious social commentary going on within the film. The official plot description is simple: “Three friends find themselves lost on Skid Row and are captured by an angry homeless gang”.  Not a good plan for a group of college boys, in a super nice car, to get lost in a bad neighborhood, after being rude to a homeless guy. But, I’m not going to review the movie again- I liked it a lot, and if you are interested you can read my review here. For me the movie was very raw and powerful, has some great characters, enough gore for a horror fiend like me and some relevant social commentary.

Since I liked the film, I was excited to get a chance to talk to Writer/Director Chad Ferrin, find out a little about him and how the film Parasites came to be.

Los Angeles Zombie Girl: Hi Chad, thanks for talking to me. What made you want to go into film making?

Chad Ferrin: “Growing up in a small Midwestern town, I always felt I didn’t quite fit in, so I’d escape through film. Seeing The Thing, Quest For Fire, Popeye, Nine to Five, and The Empire Strikes Back on the big screen really lit a fuse inside me. Then when my dad brought home a Betamax with Taxi Driver and Saturn 3 my cinematic world exploded. I’d watch 3-5 movies a day. Being transported to all the different worlds that flashed across that small TV screen sealed my fate.”

LAZG: What was the first Horror film you worked on?

CF: “I was a production assistant for pick-up shots on Halloween: The Curse of Michael Myers.”

LAZG: Can you tell me about some of the films you did before Parasites?

CF: “I sold my house to make my first feature, Unspeakable, and then my beloved 1968 ½ Ford Mustang to fund The Ghouls. I hope I don’t have to sell a kidney to make the next one!”

LAZG: What made you decide to do Parasites?

CF: “It’s my spin on one of my favorite films, Cornell Wilde’s The Naked Prey, which is based on the amazing true story of John Colter’s escape from Blackfeet Indians. I took my fee from directing The Chair and rolled it into Parasites. “

LAZG: Did you realize what an impact the story would make socially when you first started it?

CF: “I thought it might, but not to the extent that it has. Love it or hate it, as long as it has people talking, that is what’s important.”

LAZG: Did you intend to go for the gritty on location look in Los Angeles? Or was that decision based on budget?

CF: “A little of both. The budget constraints helped give it a frantic energy, combine that with some sleazy locations and that gritty look is nailed.”

LAZG: Did you shoot on the streets at night without permits, guerrilla style?

CF: “No, we had permits. Not that it really mattered, ironically, as the police rarely set foot in the areas we shot in.”

LAZG: What is your favorite horror film?

LAZG: What filmmakers have influenced you?

LAZG: Can you tell me about any upcoming projects?

CF: “I hope to make “Horse” this year. It is vengeance/siege/chase/masculinity/morality packed into one hell of an action-driven western about a lone gunfighter seeking vengeance upon the men who murdered his horse.”

LAZG: Wow! That sounds exciting. Keep me updated! Anything else you can tell me, about you?

LAZG: No Cell Phone? AHHHH! LOL! Do you have any advice for new filmmakers?

CF: “Stay to true to yourself.”

Thank you so much Chad!

So, to sum up my take on the film: Parasites is a raw, powerful movie with a strong socially relevant commentary. If you get a chance to see it, I recommend that you do. Keep an eye out for Chad’s other films, Unspeakable, The Ghouls and his upcoming film Horse.