“The Child Remains” is a Chilling Supernatural Thriller

Check in if you dare. You’ll sleep like a baby 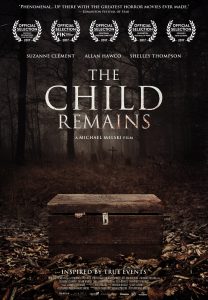 The Child Remains is a haunting, twisted supernatural tale about evil personified. The suspenseful thriller written and directed by Michael Melski, is loosely based on the horrific real-life tale of the “Butterbox Babies” in Canada.  Spanning almost 20 years from the 1920s to the 1940s, Lila and William Young ran a maternity home that resulted in the illegal adoption of many children and caused the death of hundreds of infants not deemed perfect or marketable. The babies were then buried in small wooden boxes that usually contained dairy products, the “butterbox”.

The Child Remains brings to life the unthinkable horrors of that house, adds to the story and keeps us on the edge of our seats.

Off to vacation in a quiet and secluded Bed and Breakfast, news reporter Rae (Suzanne Clément) and unemployed musician hubby Liam (Allan Hawco) want nothing more than some rest and relaxation. But forces beyond their control have brought them to the Mersey Inn and this will not be the vacation of their dreams – more likely, it will be the making of a nightmare! 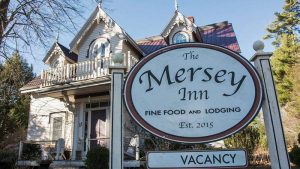 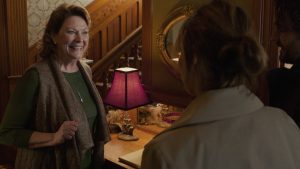 Rae is suffering from PTSD and is on leave from her job because of a mental breakdown. She is immediately affected deeply by the house. Visions of a ghostly woman, a door smeared in blood and horrible smells make her sick. Her husband, who is a bit of a jerk, dismisses everything. They are there for her birthday, she is not to be doing any investigating, and can’t they just relax and have fun? Oh wait, there is one more complication: did I mention that Rae is pregnant? 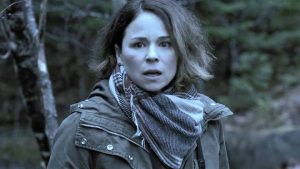 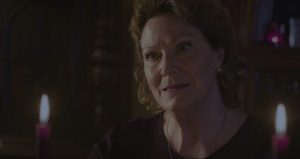 The innkeeper Monica (Shelley Thompson) is a strange lady, with poor boundaries, a fake cheery attitude and a very keen eye for the fact that Rae is pregnant. She informs them that they are the only guests, which should have tipped them off right there. As they go upstairs to their room there are baby portraits on the wall, which are never mentioned, but I recognized them as being port-mortem photos that were very popular in Victorian times. Dead baby photos? Run! At dinner, Monica does share about her mother Rose, who ran the house for many years as a place for young girls to have their illegitimate babies. She admits that many of them died and that her mother was an herbalist and chemist who created her own elixirs. Probably very helpful when you are stealing babies. It was easy to understand they need to get out of this place now! But of course, they don’t. 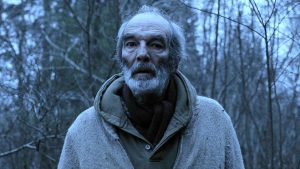 Rae is a reporter, and those instincts drive her to try to piece together the secrets in the house and figure out what her nightmare hallucinations mean. And wow what secrets she finds. The creepy groundskeeper Talbot, (Played by an amazing actor you may remember from some ‘80s horror, Geza Kovak) warns her to leave and stay out of the woods, which of course makes her want to go in worse. Inside the forest, she finds a graveyard full of homemade headstones and dolls sitting on all the graves. At the local library, she is greeted by disdain when she starts asking about the horrible things the former owner of the house was accused of, and the police want nothing to do with it if there is no eyewitness.

Liam, in the meantime, sets up his keyboard and recording stuff in a room upstairs full of creepy dolls, a chair that rocks by itself and an ominous antique ghost box, that comes to life when he plays music. A ghostly entity named Simon wants to play Simon Says and we learn that Liam had been to this home before when he brought a girlfriend there to play. So, right there Liam becomes the first one I want to see get killed. What a jerk to bring his wife to the same place. Yes, to be fair, they are being manipulated by forces beyond the grave, but still… 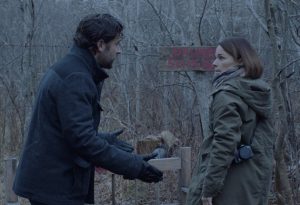 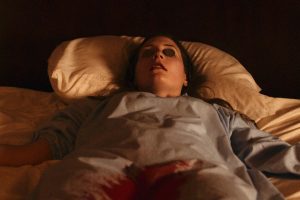 As the story unfolds, we find out there is still a horrible thing living in the very soul of the house and it seems like Monica may want to step into her mother’s shoes; she is quite the chemist herself. When the big secrets are revealed, the film takes off with a lot of help from the supernatural forces in the house.

Rae herself is the one who is in danger. Having been saved as a baby by a kindly soul, she starts understanding what the ghosts are trying to tell her and that it is no coincidence that she is at that house. The horrors that have laid dormant there for so long are finally unearthed. At that point, the audience and Rae herself are totally caught off guard. Horrible and gruesome things have happened in this place, so it was not hard to root for the mother and her baby to survive! 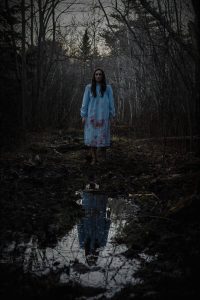 Beautifully moody cinematography, well-done SPX and talented actors paired with a great story, made this a movie I really enjoyed. This is not a gory film, but it’s full of suspense, unspeakable violence and the darkest of evils.

What seems like a simple story at first, The Child Remains becomes more complex and compelling the longer you watch it. I wasn’t sure at first, but I got sucked in about halfway through. A long film, at over 2 hours, it might be a lot for some people. With homage to films like Rosemary’s Baby, Psycho, and The Conjuring, the film gives you much to think about and surprises you at the end. The beginning is a slow burn, but when the film picks up, it really starts moving, all the way to the twisted cliff-hanger finale. Will there be a sequel?

The Child Remains will be available at selected theaters and on digital June 7th, 2019. For more information, you can check out the website here.