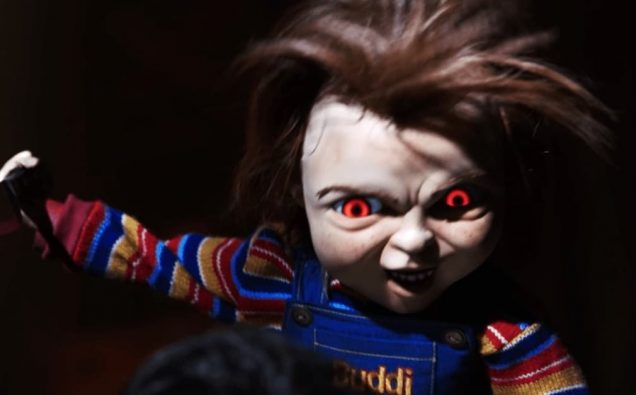 The reboot of Child’s Play has had people on both sides of the fence. Whenever a favorite horror franchise is changed around, it can upset fans. But in this case, the update to Chucky 2.0 (pun intended) in the new Child’s Play, by deleting the serial killer backstory and the adding of modern technology, has apparently worked and the film is getting mostly decent reviews. 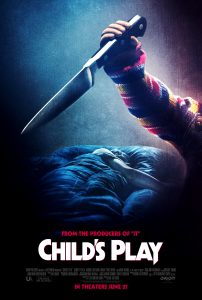 One of the reasons I was personally excited to see the new film, was because my favorite Jedi, Mark Hamill, is the new voice of Chucky and I couldn’t wait to hear what he was going to do with the character. I’ve have loved and hated films in the original franchise. Some I thought were scary, some funny and some incredibly silly. I was hoping for a fun comedy that I did not have to think about too hard, and that was what I got. In the newest incarnation, we are not expected to take it too seriously, just to jump in and enjoy the ride.

In Child’s Play 2019, Chucky is reimagined as a defective product of an abused Vietnamese factory worker. He is an A.I. that utilizes the wrong kind of machine learning and is not inhabited by a reanimated bad guy. This dangerous robot Chucky is gifted to a lonely and isolated boy named Andy who does not seem to mind that his new buddy is trying to take over the world. He’s an outsider just like him right? 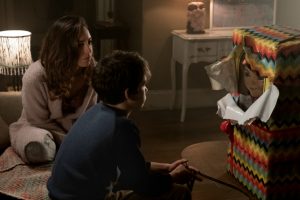 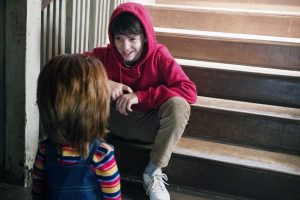 Child’s Play is a sort of a mirror image of Toy Story– the dark and bloody side! Creative SFX and gore along with a touch of Sci-fi is something I love, and there is an abundance of it all in this film!

Our wonderful friend Miranda Kuhl over at Hollywood News Source went to the press conference and I am sharing a few excerpts of the conversation, in particular, the ones with Mark Hamill and director Lars Klevberg.

Enjoy these questions from the Child’s Play press conference.

Mark, what kind of decisions went into deciding on the particular voice for Chucky, to get the right tone, to distinguish him from what Brad did in the original, and from your other roles?

Mark Hamill: Well I got a letter from Lars. And he already laid out his vision for the film before I read it. And then they sent me the script and I thought the crucial element that was different from the original – which I loved – and I’m a huge fan of Brad’s interpretation but in this one, Chucky has a different origin. It’s not the soul of a serial killer, someone deliberately goes and alters his operating system and takes off the safety measures. So he was really like an innocent child really, just learning from what goes on around him. I thought that was crucial. Also the age of the boy, instead of him being like 5 or 6, Gabriel plays a young teenager, and that was a fundamental difference from the original. And he does an amazing job, I have to say. When I read it, I said if they don’t find the right actor to play Andy the whole thing falls apart because you see it through his eyes. And wait till you see this guy. He is spectacular; he’s so authentic, so genuine and sympathetic. It’s really unfortunate you got such a messed-up toy.

Mark, did you get to see the film before you were brought on board?

Mark Hamill: No, I just read the script and Lars’s letter. I guess there’s a difference between a remake and a reboot, but the fundamental differences were the character of Chucky and the character of Andy. So I was very excited to do it.

Lars and Mark: Lars, what sort of direction did you give Barry for the score, and Mark how long did it take you to learn the song?

Lars Klevberg: Yeah the song. So early on I suggested to him to deliver an original Oscar song. I think it was a great idea actually. For the score on this, we got Bear McCreary on board and I talked to him. Just talked general ideas and how we like the sound scope to kind of be, and he left a couple of days after I talked to him and I just checked on him, like ok how’s it going and [he said] I’m shopping instruments, all these crazy small instruments. He showed me some pictures, and I was like I’ve never seen those before. And then he came back and he presented to me, and we talked more and he kind of left for a couple of days more and then he came back with the score and theme of the movie, and I was just blown away. It was such an iconic voice from Bear. And he used all these strange, strange small instruments and we talked about doing it in a small scale with a personal touch and he came back with this and I’m blown away how he achieved it to be honest.

Mark Hamill: Well earlier on, we had a placeholder. I was singing it to the tune of ‘You are my Sunshine.’ And so I sort of got used to that. And then Bear McCreary sent me the disc with his song on it and first of all, I was like Oh my God, this is like Rosemary’s Baby lullaby good, where it works authentically but it sort of creeps you out in a way. And I do a lot of voiceovers, so I was going into the Valley from Malibu and I listened to it 18 times on the way over and I think 22 times on the way home because there was traffic. It bore into my head like an earwig. I’ll never be able to get it out of my head as long as I live. I thought Bear did just a great job.

Lars, there’s an amazing scene in this film where Chucky learns something about violence by watching kids laugh at Texas Chainsaw 2, a film that has some incredibly violent scenes that are played for laughs. What you were hoping to achieve with that scene and how you think it plays amongst the argument of violence in horror films?

Lars Klevberg: In the script, it was read like they were watching a cheesy 80’s horror movie. So when we were going into it, we would get presented some ideas from the studio, like movies we could screen there, and Texas Chainsaw 2 was one of them. And it worked out pretty good. There’s a scene there that I [liked] a whole lot, the skinned face, and I didn’t remember that before we start cutting it in, I was like, dude this is amazing, we can actually use that in foreshadowing what Chucky is learning. And it ended up pretty good actually for the people that watched it and can backtrack a little bit. No, it’s not about, for me in this movie, it has no commentary about violence in movies. It’s more about how a free spirit, self-aware entity/ person/doll changed by adapting to its surroundings so it’s kind of 1+1 when you see they’re laughing at the violence and you see the violence, and you [Chucky] just want to do what makes them happy.

Mark, there was a lot of excitement when you were announced as the voice of Chucky.  Do you feel like a hot commodity?

Mark Hamill: No. To tell you the truth, when I agreed to it, and it sunk in that they wanted me to do this, I felt intimidation like I hadn’t felt since I did The Joker. ‘Cause when I did the Joker, there was often the backlash of people being mad before they even saw him. ‘Michael Keaton’s a comedy actor! You know he can’t play Batman!’ So I thought when I auditioned for the job as the Joker, there’s no way they’re going to cast this icon of virtue. Luke Skywalker is the Joker? Forget about it! So I had no performance anxiety because I knew they couldn’t hire me. It was only when they hired me that I thought Oh no, I can’t do this because so many people have expectations of what he’s supposed to sound like. But I didn’t feel that kind of intimidation until it had sunk in that I was doing this. Because you know the originals have such partisan following. You know, there are people saying you can’t touch this! You’re no Brad Dourif. Which I agree, I love Brad! But it’s a great responsibility so I’m anxious to see how people react. Because it’s not the Chucky we all know from before.

Mark, this is a kind of role you could’ve played completely campy if you chose to but there’s almost a poignancy to the way you’ve voiced Chucky, and I’m curious how you found that right sort of level with him? Were there any particular influences, I know you’re an encyclopedia of animation voice actors,  so was there anything or anyone that inspired you?

Mark Hamill: We always try and be guided by the script. Now I had Lars and three producers that were all together and it was a really sort of open collaboration because I would try and do maybe 5 in a row, and do slightly different nuances. The interesting thing is to see it assembled, what choices they made. Because he pretty much stays innocent throughout the film, I mean early on you’re doing things (said in Chucky voice) ‘if I can’t be your friend, then nobody can!’ and I do a big shift, but it was too early you know. It’s really like giving them jigsaw puzzle pieces that they can assemble later to their liking. They held my hand through the process because obviously, they know much better what they want than I did. But, as I say, I love challenges, and it was so much fun to do it. And I was so impressed. I saw the film over and over and over and over. And over. And everyone is pitch-perfect in terms of the casting and the performances as far as I’m concerned, so we lucked out in that regard.

Lars, there is this sense of 80’s nostalgia, E.T, maybe Spielberg too, Stephen King, all of that. Do you have a comment about it?

Lars Klevberg: Yeah, there’s a lot of old movies coming back, being remade this time. And you know I think the term ambient feel is a little washed out these days, but for me it all comes from the script and you know people think of ambient like it’s a visual trademark, but for me it’s dealing with like troubled humans, blue collared humans, experiencing something magical and forcing a relationship with something, a new entity or friend and through that you can open up their emotional world and for me reading the script, I kind of had a lot of references from E.T. I pitched it as E.T. on acid for the studio and it kind of summed it all up. But you never want to do 1-to-1, or you just want to find, ok I feel some sort of movies that meant a lot for me when I was younger and I should kind of see what is the reason that I love them. There was more than E.T. but it’s a little bit of an 80’s vibe but it’s mostly in terms of how I would like to present Andy and Chucky and the relationship between them.