Darken Your Holidays With This Festive Tale Of Terror! 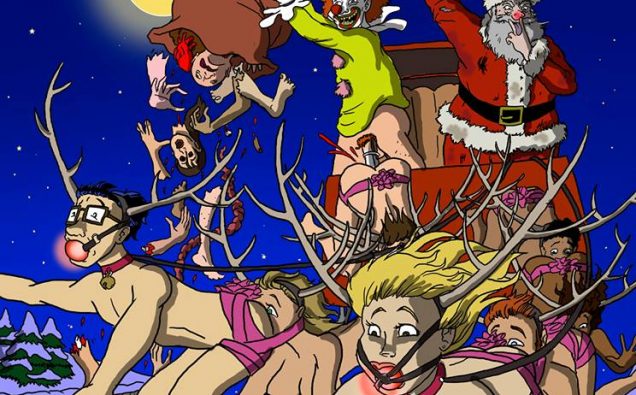 Are you sick of Christmas? Do you dread the yearly Christmas Carols echoing through snow covered streets? Do the words of “Rudolph the Red Nose Reindeer” haunt your dreams immediately after Thanksgiving? Maybe you need this Christmas Horror Comic in your life – “A Krazy Koo Koo Kristmas.” Kick back by the fire, grab some Swiss Colony Beef Log and Egg Nog, fire up your favorite tablet, and read what is likely one of the most absurd things you’ll read yet.

In this article I’ll be interviewing fellow Blood Shed writer Jeffrey Scott. Jeff wrote the story along with Yalov Levi. The art is by Joe Colewood. Before we get started with the interview, check out Whorror Comix. 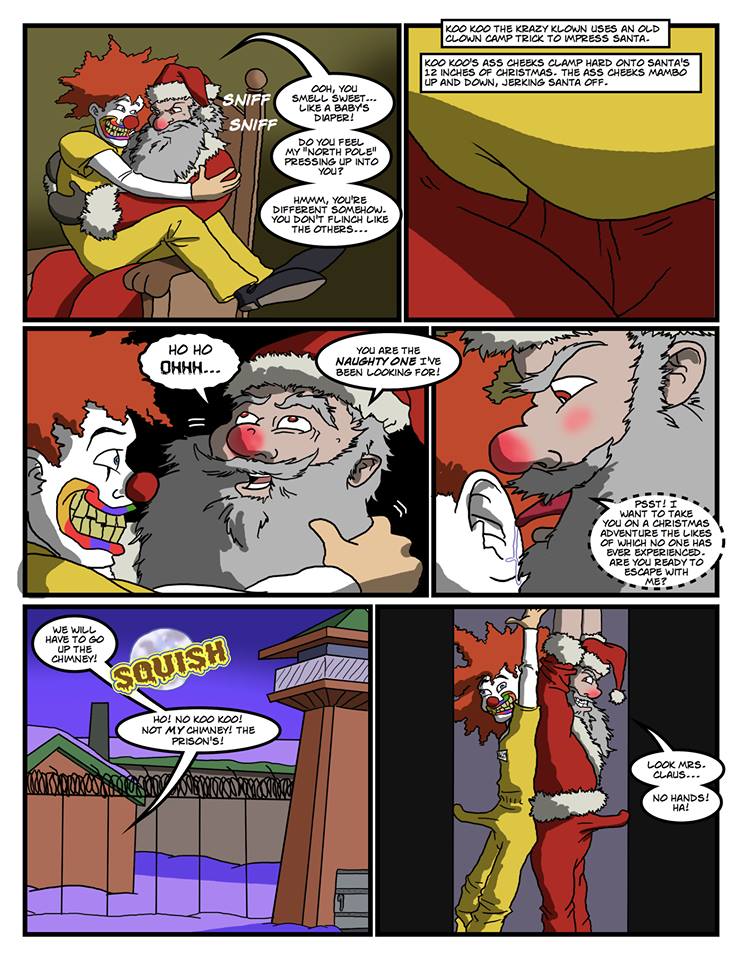 So this comic is completely absurd. To the point where I feel obligated to mention how staunchly anti-PC this really is. I mean that in all the right ways, mind you. I think society is getting a little too thin-skinned. Comedy can often times be over-the-top in many ways, much like horror. Both genres can be very polarizing. Marrying the two is a strong concept. What made you want to make something so ridiculous?

Well me and my partner wrote a story back in July that starred Koo Koo ad well, who was basically this rapist, murderous clown. We knew we wanted to bring him back into the spotlight again, and after a bunch of different ideas, ended up deciding to do a Christmas issue. We knew we wanted to get Santa and Koo Koo to meet up early, and prison was a good place for sex jokes so we started the story with Koo Koo’s incarceration. After that we just made a list of the nastiest Christmas gags we could think of, picked our favorites, and put it together.

What are some of your horror influences?

When Yakov founded the comic back in 2010, it was definitely from a love of old E.C. Comics and franchises like The Twilight Zone. I’d say for me, on the issues that I’ve helped write, E.C. Comics have been a huge influence, as well as the Tales From The Crypt. The story structure, where even the protagonists are shitty people, and the punishments and nasty turns that often came at the climax were a big influence.

What are some of your comedy influences?

The Three Stooges, Looney Tunes, and Edgar Wright, Rick and Morty, Archer, Peter Jackson, Sam Rami and once again, Tales From The Crypt. I’m a big fan of slapstick; I think it tends to be looked down on, but used intelligently it can be very funny.

What are some of your favorite horror comedy crossovers?

Some of the good ol’ classics like Gremlins, Evil Dead 2, and Braindead come to mind. Gory slapstick stuff, “Splatstick” for example. I like gory slapstuck, especially when it’s accompanied by witty dialogue. The “Damn Fine Custard” scene on Braindead is one of my all time favorites.
What is the inspiration behind Koo Koo?
In our original comic we wanted to do a parody of The Licked Hand urban legend, if you’ve heard of that. We decided to do “The Sucked Dick” instead. Then Yakov came up with the idea of making him a clown. And then we just notched up that underlying perversion times 100 with this comic. This is with our first comic Koo Koo appears in since “Things That Go Slurp In The Night.”
Any plans on the Animated Misadventures of Koo Koo?

Haha, maybe. I think we got a lot of our Koo Koo jokes out of the way in this comic though. We don’t want to return to the same well too much.
Thanks for chatting with me, Jeff!
Jon of the Shred is a multi-instrumentalist, graphic designer and writer. He is the CEO and Creative Director of Scythe Saga Records, a label that hosts an incredibly diverse roster of synthwave artists and producers.
SHARE THIS ARTICLE
No Comment