One of the biggest up and coming icons in the genre 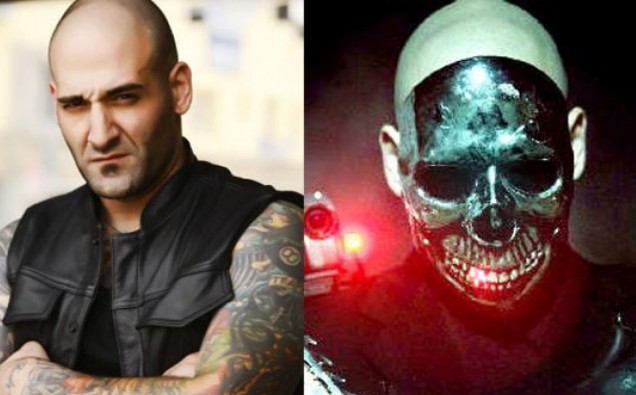 Today I had the pleasure of interviewing one of the biggest up-and-coming icons in the horror industry, a man as impressive behind a mask as not, most famous for his role as the murderous Chromeskull, Nick Principe! Here’s how it went!

John Lepper: Thank you, Mr. Principe, for this opportunity to interview you. You are one of the biggest up and coming horror icons and have done some amazing roles. What made you want to do horror movies?

Nick Principe: Horror movies have always been my heart. Being cast in horror films happened from being around other horror nerds/filmmakers. My initial goal was to play monsters/slashers in movies. You could say I started with Kane Hodder dreams but now I have more Boris Karloff dreams? After being cast for regular acting gigs I REALLY liked it. My first was Nobody can Cool, a indie thriller. I said to myself “self…. If this turns out well I’ll pursue more reg acting gigs…. If not I’ll stick to being behind the mask.” Luckily I did a great job and since have done way more acting roles. I can’t say I’m Boris Karloff caliber, but I’m trying

JL: Well, and I’ve mentioned this to you before, you show amazing talent both with a mask and without. With characters like Chromeskull you show the ability to convey a character entirely through body language, which is what Kane Hodder is famous for with his Jason roles. But in other roles, such as in the films of Mr. DeNucci and most recently with Massive in Collar, you exhibit a wide range of emotive facial work and character building. Do you have a process? Have you ever taken any lessons? How do you do what you do?

NP: Wow, thanks! Jeez as far as a process, I ask the writer and director a lot of questions, maybe too much? Then I add what I feel is right for the part? And hope the director is on the same page as me? These roles become adopted children to me. The writer and director are the parents and it’s up to me to raise the child/character with them I always want to give the director exactly what they envisioned and maybe add somethings they didn’t think about. After that I like to make a playlist of songs for each character I do that I’ll listen to when rehearsing and on set in between takes. Recently, in Germany, I had to wear a lot of prosthetics and my ears were covered. So I put the headphones on first and then the make up.

JL: Awesome. Well, it may be poor form to ask even a foster parent this, but which one of your “children” is your favorite? What has been your favorite role and why?

NP: Ha, well, Chromeskull will always be my favorite. Because my DEEP love is for slashers and he was my first big role. But John Falcon from American Muscle is up there too because so much of myself went into that role? We had so much in common. Both of those roles affected me so deeply mentally that they both left some scars. So I guess if a role can touch me that deep I must be doing something right!

JL: Speaking of Chromeskull, are we ever going to see that maniac again? The original idea was for it to be a trilogy, from what I hear, with the third film being a prequel. Are you able to say anything on that?

NP: Ha, no, it’s fine. I can talk about it. It was never planned to be a trilogy. It was never planned to even have a sequel, honestly. I just remember on set we were shooting the film basically in the same order of the script (chronologically) and, when we were shooting my “death” scene, rob was like “Should we kill him off?” But we had a huge fx set up and didn’t want to waste it so we figured a way to bring him back without the supernatural route. I don’t know when the third will shoot and if it’ll be a prequel or not? I know rob is busy with other stuff so I guess it’s a matter of time.

JL: It’s funny you brought up the supernatural route because after watching that scene and then hearing he was going to be coming back, that was the route I thought was going to be taken. So, a third film is a strong possibility then? Perhaps a matter of when, not if?

NP: Def more when. I actually talked to some doctors after I saw a PBS special about a guy who got his face ripped off by a bear. And the doc said as long as the brain was still intact they could build some kind of face. It wouldn’t be pretty, but they’d live. So we went from there.

JL: That’s cool! Well, I look forward to seeing him again. It’s been great talking to you. Before I let you go, do you have anything else you want to put out there? Any future projects you want to say a word or two about?

NP: Ahhhhh there’s always something. But I’m drawing a blank right now? Ha. But thank you!

JL: And thank you! Best of luck in your future endeavors! I can’t wait to see what you do next!