Who can survive Circus Kane? 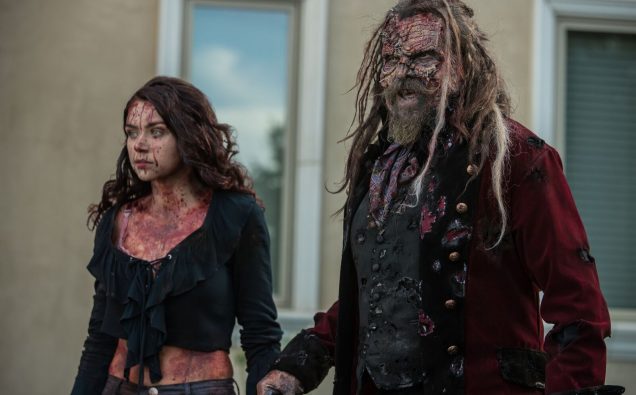 As a person who has not only worked in the haunt industry, and has had the honor of going to some of the very best horror events and escape rooms Los Angeles has to offer, I have a strong admiration for Circus Kane and all the gore filled rooms offered in the Golden Ticket experience to Balthazar Kane’s “guests”. I love interactive haunts!! I would have been suckered into Circus Kane I’m afraid. Now the stakes are a bit higher in this horrifically entertaining romp through the big top from Hell, than anything I’ve ever been invited to, and that’s what made it amazing! I was totally invested in wanting all the characters to survive this not so fun-house of horrors.

Synopsis: “The notorious and disgraced circus master, Balthazar Kane, invites an unsuspecting group of social media stars to the revival of his CIRCUS KANE by promising $250,000 to any of them who can make it through the night. Kane’s true plan quickly proves to be far more sinister as the contestants realize more than money is on the line. The group must fight for their lives to escape Kane’s demented house of horrors.”

What made me like it the most was, that because I’ve done escape rooms before, and love them, I was playing along too. Looking for the clues, pointing at the screen, trying to help, yelling watch out that’s not a toy clown, etc… so it was very interactive, even on a small screen. I even felt the need to go back and watch it again, to see what clues I missed the first time! If you can imagine mixing Saw with the likes of Willy Wonka and the Chocolate Factory (both favorites of mine too) – well that’s a good comparison to Circus Kane! I have always found clowns and circuses to be really creepy anyway. Even as a little girl, I hated the greasepaint covered faces and never thought they were funny. I always thought there was something evil lurking under the masks… 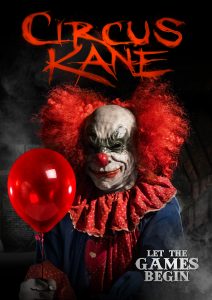 Bringing a group of Social Media influencers together is entertaining all on its own, trust me, I’ve been there. Bringing into the same room, horror collectors, reviewers, a scream queen, a gamer, along with vloggers and bloggers is brilliant. But to challenge them to try to survive serious monsters and deadly games, well I’m afraid real ones wouldn’t do well. (or would I?) The one thing that surprised and disappointed me about Circus Kane was this- why weren’t these influential folks doing their jobs along the way? Snap Chatting, vlogging, shooting photos. Facebooking and Instagramming their way through this world of terror to let the world know they went out as heroes? Isn’t that the perfect ending to a horror lover’s life?

Every actor in the film had a moment of greatness, whether it was funny or scary. A few stand outs for me: First off Tim Abell as Balthazar Kane. We see him before he becomes a monster and after he goes crazy. I loved seeing him in the opening as a magician and mentor to a young fan. The scene was truly beautiful. Mark Christopher was super funny as the gamer, as was Ted Monte the Robert Downey Jr type guy who owned the memorabilia store.  Jonathon Lipnicki (remember him at 5 years old in Jerry McGuire?) did a good job becoming a hero and I really liked Victoria Konefal as our final girl, of sorts. I also adored seeing Richard Moll- who I haven’t seen much since the 80’s when I loved him on TV’s Night Court. 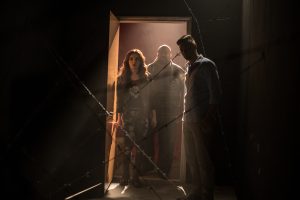 Circus Kane did not have a huge budget and sometimes it shows, but it was still one of the most entertaining indie horror flicks I’ve seen this year. With a great storyline, excellent directing, awesome gore, some really talented acting, and a great twist at the end, this is a VOD you should make sure to put on your favorites list!

I got a chance to talk to Tim Abell- who played the evil Balthazar Kane- about his career and his experience on Circus Kane.

Los Angeles Zombie Girl: Hi Tim, thanks so much for talking to me. You have a large body of films! Do you have a favorite type of character or are you down for anything?

Tim Abell: “Now, I am down for any role that’s a great character…. But I didn’t really start getting work in Hollywood that paid the bills until I embraced who I was and my military background. I did a succession of low budget action films playing military or para military types like Rick Jacobsons, Strategic Command with Michael Dudikoff, Fred Olen Rays Hybrid (where I met Chris Ray) and Rapid Assault and Rod Mc Donald’s Steel Shark with Gary Busey and Billy D Williams. All these films got me ready for my audition for Jerry Bruckheimers Soldier of Fortune Inc syndicated series, which I eventually was cast as Benny Ray Riddle the no nonsense Marine Scout Sniper. After that I played a few more military roles and then segued into modern day serial killer in “Instinct to Kill” with Mark Dacoscos, a Civil War Southern Warhawk in CBS MOW for Angela Landsbury Murder She Wrote: The Last Free Man.”

LAZG: In Circus Kane you play quite a monster. Was this an interesting character to play and what did you do to prepare for it?

TA: “Immensely interesting! And challenging on many levels. It took me a bit for me to find the hook into who Balthazar Kane is. I read and reread the script a few times, researched Horror Show Ringmasters and Freak Show Carnival barkers and pulled from performances by great Shakespearian thespians, entertainers, performers. On one level, he is just a man and caring father figure and mentor, on another he’s the performer, entertainer and showman. Then there is the monster if you will, deaths tattered angel collecting one soul at a time. To play all this… be all this and still be real and truthful was the challenge. To walk the line of a sane man and cross over into the insanity that is Circus Kane… what a gift for an actor.”

LAZG: How long did your makeup take each day?

TA: “Vincent Guastini’s SFX makeup application took 4 to 5 hours… plus contacts, plus teeth and then hair and wardrobe. It was awesome to have that time to reflect on the scenes that day and who Kane was, what pain he was about to inflict and why.”

LAZG: Do you think Kane is really a monster or should we in the audience feel some empathy for him?

TA: “I would ask you, after watching Circus Kane, did you feel for him? As the actor playing Kane, I, of course, don’t see myself as a “monster” but as the ringmaster guiding the show and the events so that the audience is thoroughly entertained. These Golden ticket recipients are getting exactly what Kane promises to them yet they are blinded by greed, ego, and pride. They do not heed the warnings: If it’s too good to be true it probably is. If you look closely, all of the 7 deadly sins are at work… and in the script, Kane is burned terribly, jailed and lambasted and disgraced by the press and all his critics. Now is the time of their reckoning and his resurgence!”

LAZG: Your character created a sort of maze like haunt for the invited guests to go through. Do you ever go to haunted attractions like that? (Well hopefully not exactly like that!) Do you like or dislike them?

TA: “Last year I was given a Golden Ticket VIP pass to the Universal Hollywood Halloween Nights! What fun!!! I had an awesome freaking time! And for Circus Kane, prior to shooting, Chris Ray took everyone to the Hollywood Escape Room. We had two groups and I was in the Zombie Room group. It was quite a challenge getting out… we did ask for two clues!”

LAZG: Can you tell me what your experience was like on Circus Kane? Do you have any stories about the making of it?

TA: “I had a blast playing Circus Kane! Kane is a character where literally anything goes. I could go as big as I wanted and that still wasn’t too far and that allowed me the freedom to create and even surprise myself with what I was doing and saying. One of my favorite moments was at a pivotal moment for Scott played by Jonathan Lipnicki, I adlibbed Jonathan’s famous line from Jerry McGuire movie and we all got a good laugh! And it stayed in the film!”

LAZG: You are a busy guy according to your IMDb. What are your upcoming projects?

TA: “I have some awesome projects and great characters coming out soon. I loved playing the troubled Hud, in “Trouble Creek” w/ Jason Gedrick and Dean Cameron, created and directed by Stacey K Black and Shea Butler….. the twisted Abraham in the Sundance Film “WhiteBlood” directed by Ben Butler…. a neo Nazi in Matthew Marsden’s “I am that Man”, the lovable romantic biker, Peter in, Project Green Lights and Issa Rae’s “Minimum Wage”, The Man in, “Renassaince Afternoon” written and directed by Ashton Webb, Mikal Vegas, “Message in a Bottle”, and Fred Olen Rays Lifetime movie playing the “bad” LAPD Detective caught up in a web of deceit and murder w/ Adam Huss and Daphne Zuniga!”

“And perhaps “Circus Kane: Raising Kane” The next chapter. Lol! Wouldn’t that be something!”

LAZG: Yes, Tim that would! Thanks for the interview!

Circus Kane was available on VOD starting on September 8, 2017 from Uncork’d Entertainment and Deinstitutionalized. Clowns unite! (Stephen King’s IT was also out the same day!) Keep up to date on the movie by going to their Facebook Page!