‘Color Out Of Space’ is a Cosmically Surreal Lovecraftian Gem

"It was just a color, out of space" 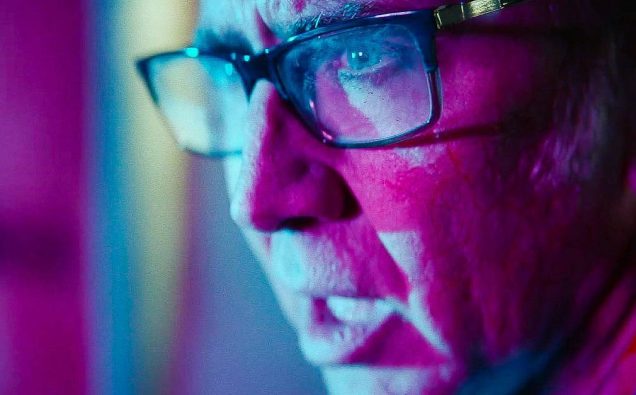 Color Out of Space is more than just a film- it is a unique and vibrant experience full of fantasy and sci-fi, blended with a plethora of body horror and gore. Richard Stanley’s first film in 25 years, flows from one multi-hued genre to another with ease. Edging a bit toward comedy and b-grade horror is one reason it works, because it’s a grotesquely fun thrill ride into madness! The film did incredibly well during its 2019 festival run, and I see why. Color Out of Space is a darkly funny, psychedelic and intense film, that is a perfect place for the over-the-top likes of Nicolas Cage and Tommy Chong. I believe it is destined to become a cult classic! 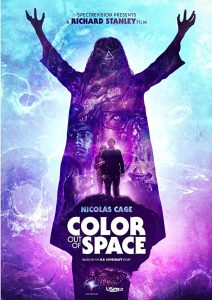 Synopsis: After a meteorite lands in the front yard of their farm, Nathan Gardner and his family find themselves battling a mutant extraterrestrial organism as it infects their minds and bodies, transforming their quiet rural life into a technicolor nightmare.

The Gardner’s recently moved to a remote family farm in Arkham, Mass to get away from the hustle and bustle of the big city. Nathan, (Nicolas Cage) along with his wife Theresa, (Joely Richardson) and kids Benny, (Brendan Meyer) Lavinia (Madeline Arthur) and Jack (Julian Hilliard) just barely get settled with their herd of alpacas, when what seems to be a glowing fuchsia meteorite crashes on their front lawn, bringing chaos to their tranquil little world. Melting and mutating the earth and everything around it, this apparently alien organism infects plants, water, animals and of course people. Basically, anything it can reach. It also affects time and space, so this family’s descent into madness happens quickly before they truly realize what is at stake. This is not a friendly E.T. as it turns the area into a giant horrible science experiment. 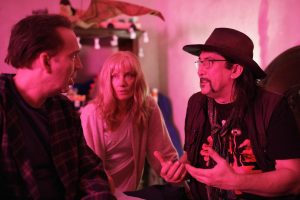 Director Richard Stanley adapted the H.P. Lovecraft short story of the same name, and in my humble opinion, this is one of the best Lovecraftian adaptations yet! My experience with Lovecraft (whose stories I love) has many times been of confusion when films are made, but this one broke that mold and is incredibly watchable.

The Gardner’s are not in a perfect place since mom Theresa is in a battle with cancer. But hoping the farm life will help, they attempt to embrace and make this world work. The movie starts with daughter Lavinia using her Necronomicon (classic Lovecraft) to perform a ritual to help take away her mother’s cancer, while also wishing for her own freedom, so we are to assume she is not enamored of the farm life. She runs into a young hydrologist named Ward (Elliot Knight) who is surveying the groundwater because the city wants to make the area into a reservoir. In their first brief encounter, there is a tiny spark, so Ward has reasons more than just science to bring him back to visit the Gardner farm. 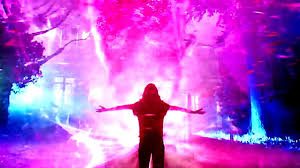 Slowly burning on, we see the film gradually change into a colorful landscape of bizarre happenings. Soon after it hit the ground, the meteorite attracts lightning and seems to disappear, dissolving into the ground overnight. The world around the Gardner’s farm begins to morph. Pink flowers start appearing all over the yard, creatures touched mutate into something simply wrong, and plants grow faster than they should. Nathan’s garden has grown massive fruits and veggies but they all taste bad, he smells a horrible smell all the time, phone and internet connections are screwed up and everything including their water, is a strange fluorescent color. Time is completely off, cars have minds of their own, and the youngest son Jack spends all his time talking to new invisible friends in their well. Whew! 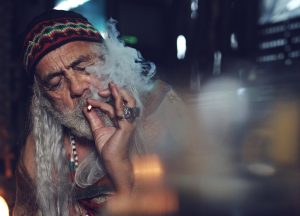 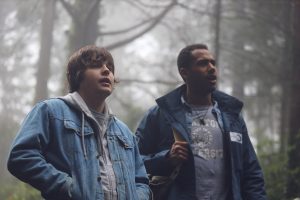 Ward shows up from time to time as things get more colorful and mutated. Older brother Benny introduces him to an off-the-grid hippie who lives on their land. Ezra (Tommy Chong) seems to know what is going on (he hears it happening in the ground) and accepts it in a way only a stoned free spirit like him can. 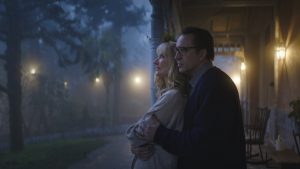 From here on we see personalities change seriously and Cage gets to start doing what he does well by turning into a twitchy, frenzied and insane character. But unlike some Nic Cage films, he isn’t the only one to fall into madness. Madeline Arthur and Joely Richardson also get their own truly bizarre moments in the spotlight. The acting is amazing from everyone in the cast as they each disintegrate in their own special and deranged ways. They were each allowed enough humor to be relatable, but still outrageous when things go bad. 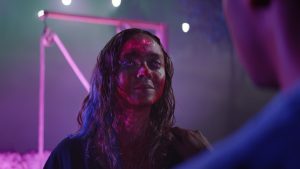 Let talk about horror. To me, this is first and foremost a horror film. The creatures and SFX were super well-done and very over-the-top. Body horror can be laughable if not done right, and this is a case of it being done perfectly. There were some very horrifically gory scenes and creatures that are positively stomach-turning. But the interesting part is we never know what “The Color” really is, leaving our imaginations to fill in the blanks. I think the earth is just an experiment for these visitors; maybe they just wanted to see what could happen when you mess with basic DNA and make new things. But who knows, you might see something totally different.

Ward shows up a few times to try to warn them about the water, though sadly all his efforts to help the family are for naught. But it’s nice that someone wanted to help since the police really didn’t seem to give a shit.

Color Out of Space is a great H.P. Lovecraft short story and despite not being perfect in every way, I loved this film adaptation. It does an amazing job of capturing the essence of Lovecraft horror, will keep you on the edge of your seat and has just enough humor to make us care about the characters. The tension, unpredictability, and manic energy in this film is perfectly done. Kudos to Stanley on directing such a strange story so successfully!

In the end, we see an older Ward looking out over the finished dam. In the closing voice-over he says: “It was just a color, out of space. A messenger from realms whose existence stuns the brain, and numbs us, with the gulfs that it soars open before our frenzy eyes.” That’s what he got out of the incident. Watch it and you can decide what The Color is for you.

Color Out of Space is in theaters now and will be released on DVD/Blu-ray and VOD on Feb 25, 2020. You will not be disappointed! It’s an entertaining, gaudy and intense roller coaster ride to the very end!