Discussing RISE OF THE HARVESTER with Artist Steve McGinnis

Creating the covers of industry leading magazines like FANGORIA, GOREZONE, GORE NOIR or DIABOLIQUE is a bucket list wish for horror artists. Artist Steve McGinnis has accomplished that along with impacting several different horror based projects and products that delve into the dark corners of the genre and industry. Following a creative passion, the first book is out right now (AMAZON AND BARNES & NOBLES) entitled RISE OF THE HARVESTER which chronicles the bloody and vengeful path of boy tormented and a monster born of the classic horror films we grew up loving! Steve took some time out to answer questions on the first book, the influences and more in part one of this interview here on The Blood Shed.

1.   Looking at RISE OF THE HARVESTER: BOOK ONE, we see influences from the different dark corners of horror. I will hedge my bets the horror films of the late 1970’s and early 1980’s played a huge role on every level of this graphic novel. Where did this idea germinate from? Did films like MOTEL HELL, DARK NIGHT OF THE SCARECROW and FRIDAY THE 13TH Part 2…? Did Rob Zombie influence you?

Actually the story came to me while doing a horror convention a few years ago. My wife and I were discussing what would happen if an actual serial killer came into the con. Would people just think the killing was cosplay and not react. So, I had this idea, now I had to build a back story. I wanted the Harvester evil from the beginning. There’s too many “I was once a good person but a certain event made me this way” stories out there. He’s like a force of nature. He’s just evil. Plan and simple.

2.  A project like this, is the start of series. Not only is the planning critical for story but also storyboarding, layout, illustrating, inking and editing. Who did you look to fill your team on this project? Did these creative minds have to have experience in horror illustration?

I didn’t write the story out. I had it playing in my head like a movie. I just followed it scene by scene. I reached out to a long time friend Matt Hancock a writer to help keeping it smooth flowing with the text. 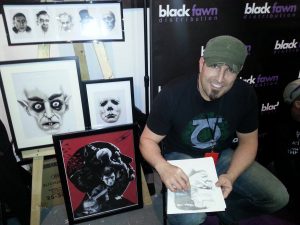 3.  Talk about the Charles Baudelaire quote at the beginning and how much it connects you to the story personally? Is the character of The Harvester part of you deep inside?

I think he is. I think we all have that side in us. The mask he wears is similar to the mask we all wear to hide our ugliness and scars.

4.   In this graphic novel, we first see the ending of book one instead of the initial origins. Was it your idea to have the end as the wrap around for book one?

Yes. I had all these ideas and storylines for him I had to try and smoothly merge them together. I just came out that way.

5.   Rise of the Harvester” has some truly brutal and explicit deaths that on paper with the structure, light, shadows and highlights really pop like a head off a pair of shoulders. What was the planning to decide the choice in deaths for the variety of people in The Harvester’s path? Why the sickle?

I wanted the head chop and planting of them to be his signature. At heart he’s still a simple farm boy who likes working in the fields. I liked the idea of the sickle for him. He’s a farmer, he’d have that handy and it’s an effective way to lop off a limb or head. 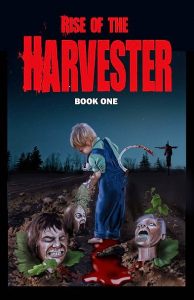 6.   Is this a revenge story or just a bad apple gone totally rotten? What would classify this as in the many sub genres of horror?

I think the first book it looks like a revenge story. But remember he was tainted from the beginning. I think he’s that urban legend, boogie man or evil in a mans body, roaming the earth doing what he thinks is natural.

7.   Where can they find out more until part 2 next week?

You can find out more here and order your own as well. https://www.sstpublications.co.uk/Rise-of-the-Harvester-Book-1.php