I am super excited about this movie! Adam Stein and Zach Lipovsky, who are both the directors and the writers, bring you the wonderful new sci-fi film, Freaks! Check out the trailer here!

Synopsis: In this science-fiction thriller, a disturbed father (Emile Hirsch) locks his bold 7-year-old daughter (Lexy Kolker) in a house, warning her of the grave dangers outside. But the mysterious Mr. Snowcone (Bruce Dern) convinces the girl to escape and join him on a quest for family, freedom, and revenge. 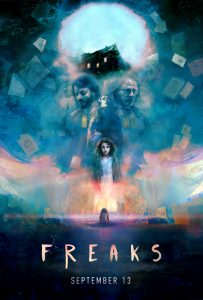 OUR INSPIRATION: Freaks was inspired by Adam’s real-life experience as a new father. When Milo Stein was born, we were both fascinated by the wide-eyed wonder and intense fear that accompanies a child’s discovery of the world. We wanted to explore a father’s unbounded love and desire to protect his child, coupled with a parent’s exhaustion, inadequacy, and guilt.

The film is an exercise in perspective. An audience explores a world through a character’s eyes, and we sought to make a film that is entirely told from the perspective of a child. We designed the movie so that the audience only sees and understands what Chloe experiences.

THE CAST : We found the incredible LEXY KOLKER after combing through 1200 audition submissions. After directing several projects for Disney Channel, we’ve had years of experience with young actors, so we have a deep understanding of how to work with kids. But with Freaks, of course, we needed to go deeper.

When we met with young actresses in person, we used improvisation to explore how the best kids could live in the intensity of the moment. We needed to find a girl who could feel Chloe’s emotions and live in her world without becoming disturbed herself. Lexy was a true discovery, a charming girl who could stand her ground with veteran actors. When unleashed, Lexy was truly fierce, a powerful force that had no limits, just like Chloe.

EMILE HIRSCH, like Adam, was also a new father when he read the script for Freaks. He identified with the deep bond and stresses of being a single parent. On set, Emile helped us create a cocoon of support around Lexy so that she could explore the most intense parts of her role within a feeling of safety. The result was primal, nurturing, and raw.

Speaking of raw, BRUCE DERN has been an unparalleled engine of emotional power for six decades. Bruce told us that he wasn’t sure about FREAKS at first, because he hadn’t done a science fiction film since 1972’s Silent Running. But the core story of family love and loss won him over.

His character, Mr. Snowcone, is driven by a need to save his own daughter. Bruce tragically lost his first-born daughter when she was young, and he connected to the character’s need to save his own daughter while he still can. His pairing with Lexy was incredible to watch, a true experience in “in the moment” behavior that brought an intense realism and connection. In the process, he said many times that Lexy reminded him of his daughter Laura.

AMANDA CREW was a surprising revelation. A Canadian actress who has found mainstream success on HBO’s Silicon Valley, Amanda was excited to flex her muscles in a much more dangerous and powerful role than what she’s known for. The movie’s ending is an expression of her passion and triumph