Creature from the Black Lagoon Terror from the Deep

The record of life is written on the land. 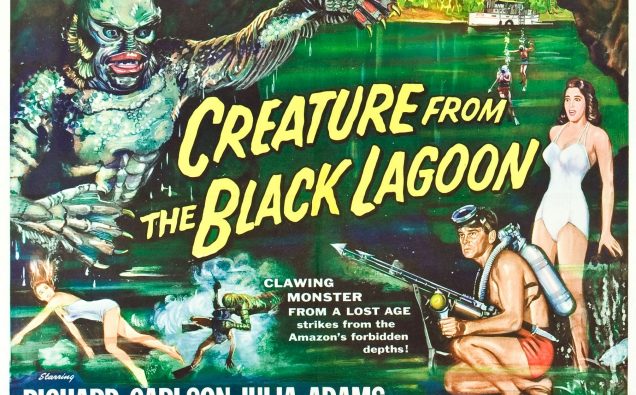 I haven’t posted an article in a while and that is because I was on vacation.  Nothing like the ocean and sandy beaches to help recharge the ‘ol batteries, but now I’m back and ready to cram your eye-holes full of some old school horror knowledge. 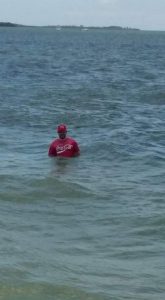 Me trying to score an interview with Jaws.

Despite the lack of shark based interviews I wanted to bring you, I am excited to announce that I will be attending the CT Horrorfest this year where one of the guests is none other than Ricou Browning.  Ricou, for those unfamiliar with his name, played “The Creature” in the Creature from the Black Lagoon, as well as reprised the role in the subsequent sequels.  While I may not appear tasty enough for Jaws to come out of hiding for what would have been the best interview ever, I am hopeful I may still be able to walk away from the horrorfest with a few words of wisdom from yet another underwater master of horror. 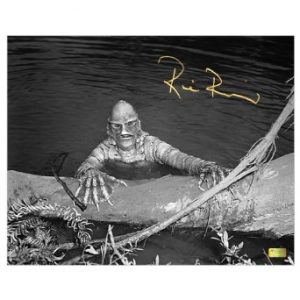 Or at least an autographed picture.

Not only am I excited about the opportunity to meet one of the Universal Monsters, Ricou is the only remaining monster actor who is still alive, so it’s like meeting the last surviving Munchkin from The Wizard of Oz, only way cooler.  I mean who else can brag that they outlived their horror monster co-workers? 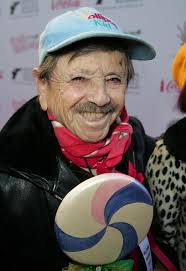 “Munchkins are fun-sized bites of horror“

There are other folks that will be attending that I will be sure to see like the “Grandfather of Zombies” George A. Romero, who I am hoping I can get a word with, but am not holding my breath just yet.  That being said, I’ve decided to take a look at the Universal classic, Creature from the Black Lagoon.

The movie starts in the Amazon, which for the time period this movie takes place, might as well have been a death trap on its own after all, those myths on cannibals had to start somewhere right?  Luckily for Dr. Carl Maia, played by Antonio Moreno cannibals are the least of his worries.  He finds an odd fossil and sets into motion what is now a classic motivator in horror movies, the “We only found a part of it, we need the rest expedition.” 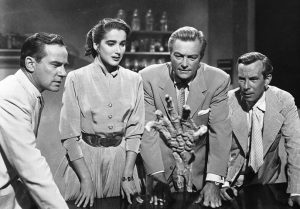 “This couldn’t possibly be a bad idea.“

While Dr. Carl was out rounding up victims, I mean colleagues, we are shown the Amazon camp, where we first get a glimpse of “The Creature” if by first look you mean only his arm.  This is a smart move though, a slower reveal allows the mind to try to piece the rest together, allowing you the viewer to scare the crap out of yourself by making the monster scarier in your head.  The expedition team discovers the camp abandoned and after a little discussion and a quick note about the area from the boat captain they decide to keep going.  Mind you the captain says it is called “The Black Lagoon, a paradise, only no one ever comes back to prove it” this is a joke to imply how great the place is, I’m more inclined to take that as a bad omen, or warning.  Not our guys, they chuckle and proceed to go scuba diving. 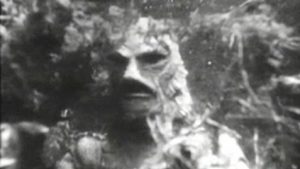 Dr. David Reed, played by Richard Carlson and Dr. Mark Williams played by Richard Denning are the two schmucks swimming around with the amphibious fish-man without even noticing.  They gather some rocks and plants and so far “The Creature” seems tolerant enough to not murder them both.

A little later while the scientists are off doing scientist things, David’s girlfriend Kay Lawrence played by Julie Adams is seen swimming, and the audience is not the only ones watching.  “The creature” gets dangerously close to her several times without her so much as noticing.  The guys back on the boat try to call out to her that she’s gone out too far, and ultimately just bring the boat to her.  Then “The Creature” gets caught in the boat’s net. 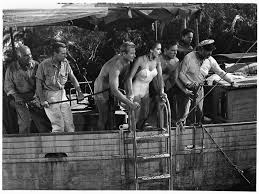 They reel in an empty net and discover a broken off claw snagged in the ropes, so they decide the best course of action is to get back in the water.  Armed with a camera, and a spear gun, David and Mark dive in after it.  At one point they get a clear view of it so Mark decides to shoot it with a harpoon.  It’s right around this point that “The Creature” drops the kid gloves and declares all out war by boarding the ship and taking one of the crew down into the abyss with it. 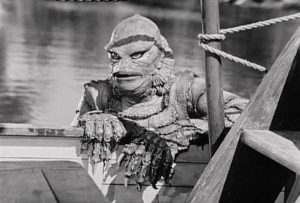 They manage to drug him with a dart, but he just leads them on a wild goose chase, while doubling back to the beach so he can get him some fair maiden.  Luckily Kay has a good set of pipes on her and the others rush to her aid, capturing our poor monster.  They then proceed to argue over trivial things because we humans are a fickle lot.  A while later “The Creature” escapes and as a result mauls Dr. Edwin Thompson played by White Bissell so badly that “If the infection doesn’t set in, he might live.”  Most sane people would want to get out of there as soon as possible, but Mark refuses to leave, when everyone else saw an odd humanoid creature all Mark saw was a walking dollar sign.

The group outnumbers Mark and decide to leave but “The Creature” has other plans, trapping their boat inside the lagoon.  David volunteers to try to move the blockage but Mark being the jerk that he is insists on going with him.  They get into a fight but Mark ultimately ends up going anyways.   This is bad because he starts trying to gun down “The Creature” with a harpoon gun.  He doesn’t really care for that so he shows Mark his displeasure by killing him violently.  They eventually work out a drug to keep “The Creature” from getting them while they get the felled tree out-of-the-way.  Of course while they are distracted “The Creature” sneaks on board, grabs Kay and swims down into an underwater cave. 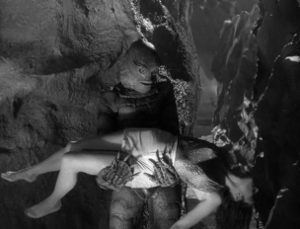 There is a final showdown between David and “The Creature” but the duel ends when the Captain and Dr. Carl show up and pump him full of lead.  He shambles out into the water and dies.  While the surviving members of the expedition look on.  For what it’s worth, this movie was a good watch, even if it’s dated.  “The Creature” was a threat in and out of the water, was intelligent and was able to set traps and cause distractions.  It is always nice to see a monster movie that has their monster do more than act beastly and incapable of thought.  Sure they’re scary but can they assassinate you like a ninja in the dark while still being beastly?  The Creature from the Black Lagoon sure could.  That’s why I would recommend this timeless classic to anyone looking for good old horror movies, you can’t get much better than the original Universal Monsters.