Crimson Art: A Look Back at Color Me Blood Red

Where the Painter Really Bleeds Passion for His Work 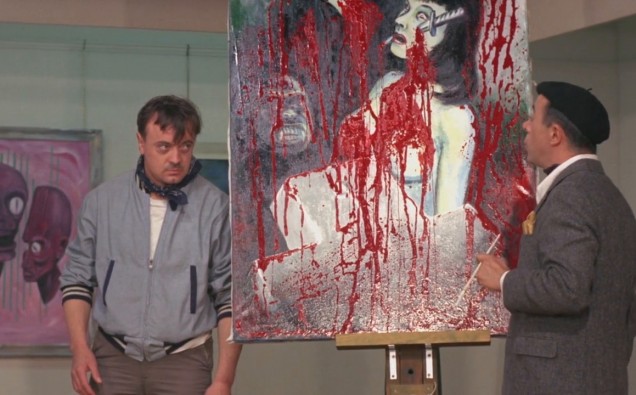 Now calling any of Lewis’s work great is a subjective exercise to be sure; the man’s films are infamous for their lousy production values and horrid acting. But every other film had something Color does not; heart. A few zany elements (upon finding a dismembered corpse a teen infamously responds with “Holy Bananas!”) aren’t enough to bring out the silly fun that came so easily from Blood Feast and Two Thousand Maniacs.

That’s not to say this tale, about a mad artist who uses the blood of his victims in his paintings, isn’t worth hearing. There is still some nice stuff to be had here. As always, the gore is pretty great, if a bit restrained. Comparatively few people meet the reaper in this outing, but their various demises are entertaining enough. Watching the nutty painter squeeze a handful of organs into gummy red paste for his easel is appropriately squirm worthy.

Speaking of nutty painters, Adam Sorge, the insane artist himself, is also worth a mention. This dude is as about off his rocker as anyone ever put to film. He goes from 0 to 100 quicker than a Lamborghini, with a temper similar to an alcoholic step dad mixed with Hitler. Sorge never even comes close to being a compelling character but watching him run around and screaming “IT’S NOT FOR SALE!” with Kratos levels of rage is certainly worth a laugh. 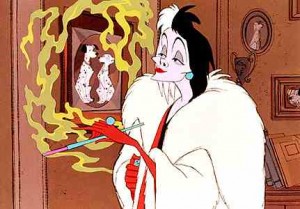 The critics have never been very kind to gore films, and Lewis use of Gregorovich is a not so subtle jab at them. It’s a shame then that the pompous snob is never slaughtered and turned into paint. Making a character this delectably unlikable and letting him survive is a real wasted opportunity.

Alas, the weaknesses that plague the entire Blood trilogy don’t fail to show their ugly heads here. Shots linger on incessantly, the acting is atrocious as ever, and worse of all Color is something no film about  an insane artist killing people and painting with their blood should be: lifeless.

Halfway through Color Me Blood Red’s production Lewis and his long time collaborator David Friedman parted ways, to the detriment of the final film. The whole movie has a real dead feeling to it, like nobody really cared. At least in other Lewis films, bad as some (or all) of them may be, there’s a real passion for film making displayed. A misguided passion perhaps, but better than the frigid corpse that this movie turned out to be.

As it is, there are enough bright spots to recommend Color Me Blood Red just to finish off the trilogy if nothing else, but not enough to make it a cult classic like Blood Feast or Two Thousand Maniacs. In the end it’s a sadly lackluster way too end the Blood trilogy.

Thankfully this was not Herbert’s last time in the blood-drenched directors chair; he’d have the chance to redeem himself a few short years later with his masterpiece, The Wizard of Gore. Tune in next week for the Blood Sheds review of that. And until then dear gorehounds, keep those muzzles wet and your eyes glued to the screen.

Jeff is a writer for the Blood Shed and eats, drinks, and bleeds horror. You can help him write his first book here