Cult classic indie slasher 100 Tears to be adapted into comic!

But it needs your help! 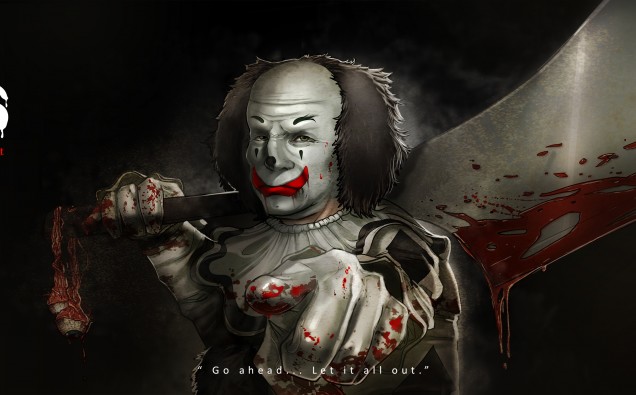 Marcus Koch’s 100 Tears, a film about a killer clown named Gurdy, is regarded by many slasher and splatter fans as a true cult classic. I myself have Marcus’ permission to cameo Gurdy in my comic We Kill The Dead, alongside 21 other slashers. So, I was stoked when I saw that news that the film was getting a comic adaptation! But it needs your help!

Gurdy the clown finds himself thrown out of the only family he ever had, as a jealous rumor turns his carny brethren against him.  Tabloid writers Mark and Jen team up with a group of crooked cops involved in an investigation unlike any one of them dreamed was possible while trying to find a way out of the death path they’ve placed themselves in on their hunt to find the Tear Drop Killer.  And that’s just the first issue!

Master Plot Comics is launching a Kickstarter campaign for its latest title, 100 Tears, on Saturday, October 24th, 2015. Adapted by Brian Lee Byrd and Sarah Hollis, the story was co-created by Joe Davison and Marcus Koch for the 2007 black comedy film by the same name. While much of the story remains the same, Master Pot Comics promises more gore, more horror, and an updated take on the independent film.

The comic, according to the Kickstarter campaign, will be six issues in length, for a total of 132 pages of slasher clown Gurdy. This campaign is for Issue #1, however, the stretch goals open the way for more issues to be produced after the initial goal has been reached. Retailers looking to advertise their physical or online stores are offered a tier to do so, as well as receive ten copies of Issue #1. Fans of the movie can also have their copy of the book signed by Jack Amos, the actor who played the psychotic clown Gurdy in the film. With gritty line art by Saint Yak, and fantastic color work by Robert Nugent, 100 Tears is sure to satisfy the slasher fan in you.

If you like slashers, comics, or even just evil clowns, contribute and/or share and help this book get made! Check out the Kickstarter campaign for the first issue below!