“Checking out is hard to do” 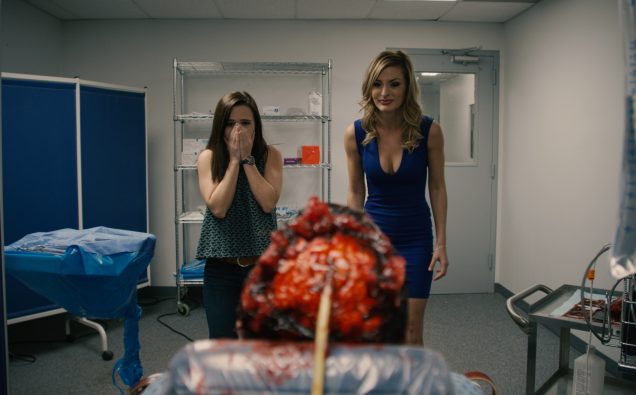 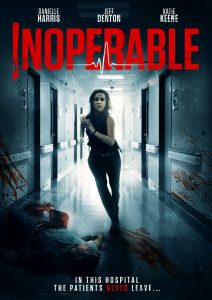 I’m not a big fan of hospitals- abandoned or otherwise. But one with a vortex where you relive a nightmare over and over? No thanks! Paradoxical time anomalies, bad doctors, and hurricanes, Oh my! Click your heels together and say, “It’s only a movie, it’s only a movie” …

In the horror/thriller Inoperable, starring Danielle Harris, (Halloween and Hatchet franchises, See No Evil 2, Havenhurst) a young woman named Amy (Harris) wakes up over and over in a seemingly abandoned hospital in the middle of a hurricane. But what she finds each time she wakes up is confusing and filled with gore. Learning a little bit more each time she comes to, she figures out that she must escape before the storm passes or she will be trapped in the “hospital from hell” time loop forever!

Originally, I decided I needed to watch Inoperable for one reason; it stars one of the horror genre’s Scream Queen sweeties, Danielle Harris, and I like her a lot. The film is a blend of genres; picture Groundhog Day caught in The Twilight Zone. At first, I found myself talking to the screen while it played because I was confused. After a while though, I got totally into what I hope was the intentional ironic comedy of the film’s situation, and I rooted for her survival!

In Christopher Lawrence Chapman’s feature debut Inoperable, what might annoy some people, worked for me. The tangled storyline web that evolved and changed, depending on the choices she and the others trapped made, was really thought-provoking and kept my interest. The horrible things going on in the hospital, lent themselves nicely to have a lot of creative gore, done with great practical effects. I must admit, I’m always in it for the gore!

Maybe it wasn’t meant to be as funny as I found it to be, but that’s what made me enjoy it. Amy was constantly flicking back and forth between sitting in her super cool Corvette in a traffic jam, trying to make a phone call, to waking up in a hospital bed surrounded by a very sicko hospital staff. The doctors and nurses apparently had only two agendas, to torture the patients with cruel experiments and make sure they never escape.

I loved watching Danielle’s character grow stronger with each reset back to the beginning, and the way her acting gets more and more serious and believable. Amy becomes stronger with each new scene, which adds another intricate strand to the maze-like storyline. How can she find her way out? Her costars Jeff Denton and the lovely Katie Keefe were also a lot of fun and do a great job in the constantly changing scenes. I wonder if they filmed it in order? It would have been hard to know what part of the movie you were in otherwise.

The ending is unexpected and powerful! During the whole movie, the viewer has to wonder, why is this happening to her? When will the nightmare end? Is it ghosts, another dimension, aliens, her imagination, the storm? What is going on? I totally had one of those, “OMG, now I get it moments” when it was revealed!  I really liked where they went with it.

Was Inoperable a perfect movie? Unfortunately, no. I think with a bigger budget, some better props, a few retakes on the more cheesy scenes and maybe much cooler lighting, it could have been an even better film. But I still enjoyed it and I’m pretty sure no fan of Danielle’s will be sorry they saw it! It’s a perfect Scream Queen flick and I hope to see her in more soon.

Inoperable will be available nationwide on DVD, Cable VOD and Digital HD on February 6th.
SHARE THIS ARTICLE
No Comment