‘The Dark’ is a Beautiful Re-Imaging of the Zombie Genre

"Your Worst Fear is Your Only Hope" 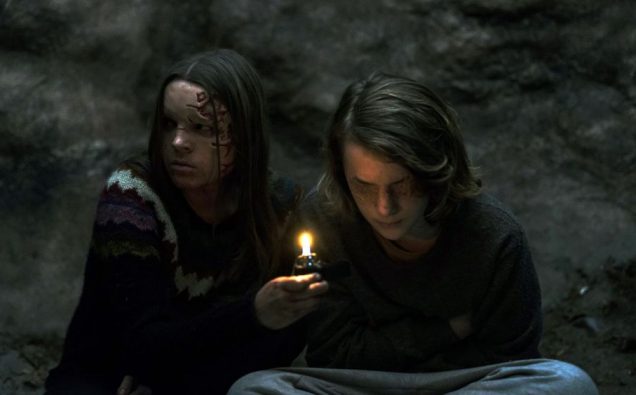 As a zombie lover, I am always trying to find the next wonderful zombie flick. I had high hopes for The Dark. Two traumatized and abused teens find each other, one is a zombie and one is blind- well that sounded like the perfect horror film! The Dark may not be perfection but is still an incredible horror film to watch and love.

Zombie films are surprisingly still coming on strong. Zombieland 2 is in production, so horror is still a wonderful place for a zombie girl like me. Some are more or less a comedy, most a traditional blood and gore fest, and some even fall into the romance category. The Dark, in many ways falls into the latter. 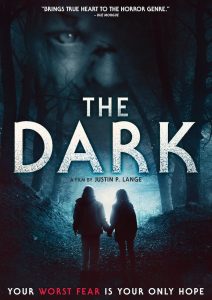 In writer/director Justin P. Lange’s debut feature we meet two young people who are severely damaged. The original monsters in this case are not giant creatures with ugly teeth, it is simply monsters known as human beings that did all the hurting. What comes after is collateral damage, the result of the abuse and how the abused person handles their horrible experience. This heartbreaking tale of two young people, who deserved none of what they were given, is incredibly poignant and thought-provoking.

The Dark is a quiet, solemn and haunting film. Set in a wooded area called Devil’s Den, undead teen Mina (Nadia Alexander) lives in the deteriorating house she grew up in many years before. Through a series of flashbacks during the film, we find out that she was abused, raped and ultimately killed by her neglectful alcoholic mother’s boyfriend. She awoke in a grave as something not dead, yet not alive. Over the years, her presence and hunting has created the legend of a monster living in the woods, so she is mostly left alone from prying eyes. Unlike most zombies in horror films, Mina is different. She is smart, artistic, able to think, speak, plan and use an ax very well. She does though, need human flesh to survive, so occasionally an unwary stranger comes up missing in the area- adding to the rumors of a monster.

The movie begins with a creepy, nervous guy driving a car, with someone covered up in the back. At a gas-station stop, the driver is identified on a TV screen inside, as wanted serial killer Josef Hofer. (Karl Makovics) After killing the attendant, Josef is off again, on his way to a house he believes is deserted, to do who-knows-what to the person in his car. When they arrive at Mina’s house, she is surprised and takes quick care of him with her trusty ax. Good riddance and dinner is served.

Mina’s solitary world is turned upside down, when she discovers who is in the back of Josef’s car. Alex (Toby Nicols) is a frightened mouse of a boy, who was badly disfigured by the cruel Josef. Alex is blind, terrified and trying to find out where Josef is. Obviously suffering from Stockholm Syndrome, he frets over following the rules given to him by his captor and has no idea what Mina is or what she looks like. Two more unlikely souls could hardly have found each other, but the story is beautiful and the two severely damaged youths are brought together and somehow form a bond. Mina cares for Alex and promises that she won’t let anyone ever hurt him again. 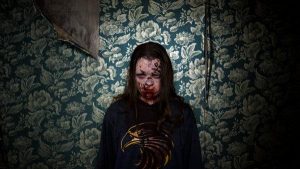 The Dark is more than a zombie movie, and much more than just a simple horror film. Jump scares, gratuitous gory deaths and over the top creatures, like werewolves, demons or vampires make up most of the horror movie world. But if we are lucky, occasionally a film will ask the big questions, making us think and take a good look at the world around us.

What creates a human monster? Is it Nature vs Nurture?

Can a monster be made, or are they all born that way? Can anyone really get out of the cycle that abuse causes, or can they be redeemed? This could be a metaphor for many things, but for this film the monster is man.

This unlikely friendship works, because they sadly have so much in common. Both were terribly abused and both are in need of, and crave, positive human contact. Mina transforms in front of us and we see how love can change who you are. Incredible acting from both Nicols and Alexander made this believable, when it could have seemed silly. Most of the movie is about their bond. You could almost call it teen love. What made it special to me is the message that there can be a light at the end of the darkest of tunnels. Even evil can be redeemed sometimes.

The Dark is a zombie film with a unique take on what is “undead” combined with the psychological trauma of childhood abuse. A wonderful film overall, the incredible acting and beautiful cinematography make it a zombie-esque film firmly added to my collection of favorite undead movies! This is not your normal zombie film –  The Dark deserves a watch!