"The mind can be lethal"

While not completely living up to it’s potential, The Dark Within is an entertaining study of what can happen to the human mind under stress. A study in repetition, the film lacks the depth it needs to make it a horror classic, yet still manages to be a suspenseful and well-acted film. 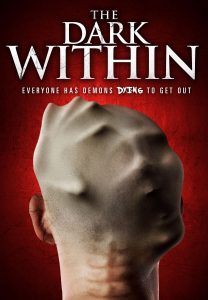 After watching the trailer for The Dark Within I was optimistic. Having seen and enjoyed Ghosts of Darkness, I was thrilled to see Paul Flannery and David Ryan Keith work together again. In the synopsis for the film, we are told that Marcus (Paul Flannery) has had amnesia since childhood and has been plagued his entire life by the disappearance and supposed death of his parents. Why would they leave him, right?

Following a suggestion from his therapist, he goes to the cabin owned by his parents to try to find the answers he so desperately wants. Once there he discovers more than he ever thought possible, or is he imagining it all? Is this the conspiracy and cover-up of a terrible experiment, or is it just demented hallucinations from a mentally ill man?

In 1991 Dr. Andrew Blaine (Niko Foster) is conducting experiments on people in a secret underground lab. As his young son Marcus sits by and draws some rather disturbing pictures, Dr. Blaine tries to medically induce psychic powers on some volunteer subjects. The experiment goes terribly wrong and horrible demons come through along with the mental powers, killing almost everyone involved. But did this really happen? 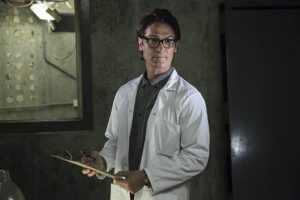 Back to the present day we see that little Marcus survived, is now all grown up and in therapy. Right away I started to get confused. He is in therapy because it’s a condition of his probation. For what they never say. Afterwards, he goes to see his ex, Sarah (Kendra Carelli) who reminds him there is a restraining order against him. For what, they never say. It is to be assumed he was violent in some way, but it’s never really revealed. They both have feelings for each other, but she is now scared of him.

From there on I continued to get more confused because things don’t always make sense. Now trust me, this is not the most non-linear film I’ve ever seen, but for things to flashback and flash-forward, over and over, the audience needs to be invested in the characters. I honestly didn’t know enough about him to understand his motivations. 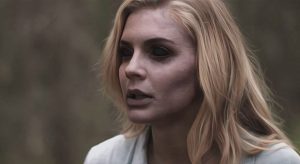 In a story similar to The Evil Dead, a man goes to a cabin and discovers all kinds of demonic happenings. But are they real? Marcus is haunted by visions from the past and as he goes on his journey to figure out why his parents left him, he starts to seriously question his own sanity. When he finds a box with a vial of green liquid under some rocks in the woods, I start to wonder how it stayed clean and nice all those years. Is this just a hallucination? Then he finds a perfectly preserved underground lab, that belonged to his father. That doesn’t seem possible either. How can this stuff be sitting here unused all this time, and it never got old, dirty or broken into?

The film bounces back and forth, present to past and back again, at a speed that made me dizzy. Marcus drank the green liquid, we think, but there is the bottle full again. It is never clear what is real or what is in his mind. Then there is the monster and the dead body. Is there a monster? Did anyone get killed? 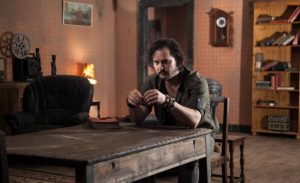 I give kudos to Paul Flannery as Marcus. He often acted in the film alone and carried the whole storyline. He did co-write it, so he understood the story and did a great job acting it, even if some of the details were lost to the audience. In retrospect, maybe there were too many details; it was easy to get lost in all the comings and goings.

This genre-bending psychological horror was an interesting ride, but what I expected the film to do eventually, was to explain what was going on. Was it a giant government cover-up that his parents were a part of that left him an orphan? Was is an evil entity from another dimension or a demon that possessed the volunteers while their minds were opened up on the drugs? Did Marcus kill anyone? Or is he simply just crazy? The cinematography and acting pulled it through, but I was left lost and with too many questions to be satisfied by the ending.

That having been said though- The Dark Within was still a cool flick, with an interesting concept and worthy of at least one watch.

THE DARK WITHIN arrived on DVD and VOD July 9th, 2019 from Uncork’d Entertainment.