“On the day of execution / Only women kneel and smile” 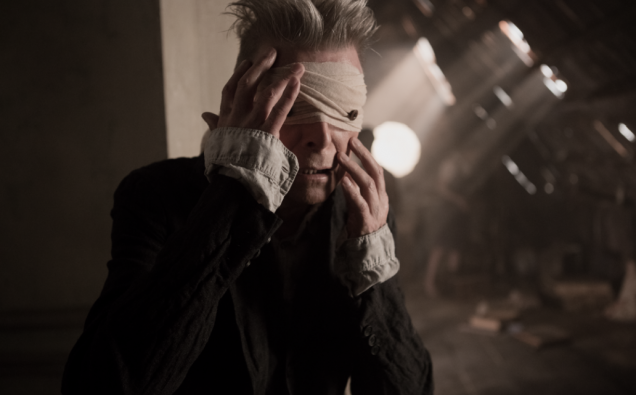 David Bowie’s latest music video plays our more like a short film by David Lynch—not necessarily horror, but something nightmarish and beautifully psychedelic.  Even the title, Blackstar, is paradoxical: A murky orb of violent fusion emitting, not life-giving light, but searing darkness.  The opening shots focus on a weathered spacesuit lying statuesque on the surface of an alien planet.  Is that you, Major Tom?

A cacophony of imagery awaits you; Bowie is our guide, adorned in a mask with button-eyes (a tribute to Dr. Decker from Nightbreed, perhaps?).  An albino, a black man, and a white woman frantically gesticulate in a manner not uncommon to demons or phantoms.  A trio of decaying scarecrows belly-dances irreverently before a dreadlocked beast descends upon them.  A deadpan coven performs a synchronized ritual, paying tribute to a bejeweled skull.

The imagery isn’t the only thing that’s downright bizarre; the song itself is nearly indescribable with our limited human vocabulary.  10 minutes may seem excessive, but Blackstar is a fusion of several distinct pieces interwoven with familiar, esoteric refrains.  “The villa of Ormen” could refer to a resort in Turkey or an obscure region of Norway (I Googled)—or someplace else entirely!  The beats are occasionally arrhythmic, instrumentation often non-melodic, but the song itself remains utterly hypnotic throughout.

Blackstar is the first single from Bowie’s latest studio album of the same name, slated for release January 6, 2016.  This could easily be his most experimental work to date.

I’ve been a Bowie fan since way back in the day, but Blackstar is definitely a headscratcher.  I’ll be interested to see how the music holds up alone, without the captivating backdrop of stylized imagery.   I guess I’ll find out in January.

What do you think about David Bowie’s latest video, Blackstar?  What’s you interpretation of the lyrics and imagery?  Sound off in the Comments section!