Dead by Daylight – No Escaping Death

A Feast for Killers 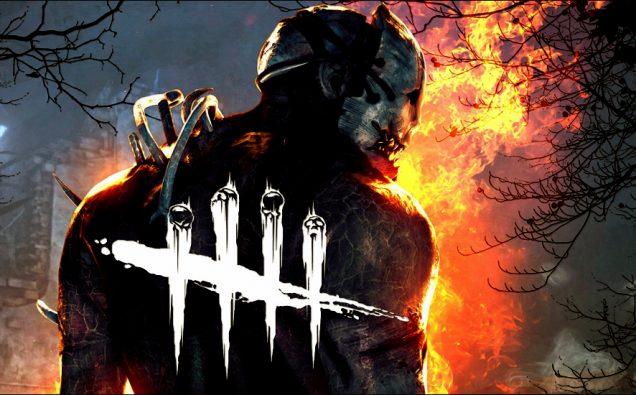 Imagine hiding in the woods, skulking about the bushes and slipping between trees, breath ragged and heart pounding… knowing death is imminent. It closes in on you like a noose but still you struggle, refusing to give up on life without your utmost. A slight fog lazily hovers over the ground, obscuring your view. The hunter is close and sweat pours down your neck, your palms become slick. Now imagine this is every night for you, locked into a rural setting of darkness and fear, fleeing from panic, only to relieve it nightly. Then you might have a hint of what Dead by Daylight represents.

Most games bring us a package that has been tried and true, with horror usually mimicking earlier titles that were successful. Stagnation is the rule rather than the exception, but some developers are still thinking outside of the box. Thankfully, the slasher killer genre has been given some love with this released title, and I mean to tell you all about it as a gushing fan should.

Dead by Daylight is described by the developers Behaviour Interactive as an ‘asymmetrical survival horror game’. This is a quaint way of saying four potential victims versus a powerful, relentless killer. Released in June of this year currently only for Windows PC, the game has an entirely PVP element that still manages to capture some of the atmosphere of slasher killer movies such as Friday the 13th and Halloween. Some of the lore seemingly is inspired by the likes of Silent Hill, Texas Chainsaw Massacre, and even Lovecraft himself. To keep this review from going off on potential tangents, I’ll break up things into sections. 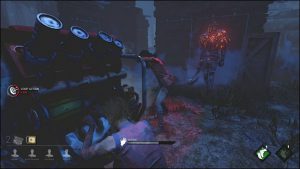 This could be bad.

Told in a series of diary entries on the game’s main website, the events take place in the town of Weeks, or at least a dark representation of it. By the year 1956, over 360 people have gone missing, no bodies, in and around the town itself which is now pretty much empty and dilapidated. No outsiders or authority figures have really made an attempt to venture in, and any individuals who do are swept up by the Entity. What happens next frames the action of the game.

The survivors awake in a dark forest, blanketed in fog. In the middle of a small clearing is an ever-burning fire, warm and the only source of light besides the moon. This is effectively the only safe place the survivors have, and the fire itself will not even burn their skin to the touch. But eventually, they are thrust into one of many eldritch locations in or around Weeks. The killers, themselves former human beings from different walks of life with their own twisted backstories, pursue the survivors without remorse. From here, it’s survive or die horribly. Failure to do so means the killers place you on sacrificial hooks, where the spider-like Entity descends from the fog over the area and claims you. Diary entries imply that the creature feeds on the souls of those punished in this way (the track when you’re hooked is even titled “Punished”) and speculates that hope is what the Entity truly feeds on.

There are two modes to play: survivor or killer.

The survivors, of which there are always four per game, have a third person mode and are unable to bear weapons or harm the killer. They must use wit and guile to escape notice while working towards the generators spread randomly throughout the levels. These objectives are time consuming to work on, and leave one exposed to possible discovery. Upon completion, they fire up and immediately give away the survivor’s location, prompting pursuit. Survivors can scrounge for limited use items like medkits and flashlights, help each other from the killer or with objectives, or selfishly hide and let the others be taken. Once five generators are lit, the two exit gates will open and the survivors can attempt to flee into the fog… only to arrive at the campfire once again.

Killers play much differently, and for obvious reasons. The view is entirely first person, and has a narrower FOV, which can be alleviated for one killer in particular with an earned perk. The view is a bit color faded, and killers can see the auras or outlines of objectives to give them an edge. They are terribly fast. With their supernatural abilities, killers are more than a match for survivors who are cornered, trapped or exposed. But they have to cover a large area, outfox them, and then take them down. Once this is accomplished, the poor sap is carried to a sacrificial hook, where they are hung up like meat and left for the Entity. Survivors can still struggle and others can liberate them, but the killer has a dominating presence on the field, and controls the action if in the right place at the right time.

This all seems incredibly simple in theory, and indeed the official website and in-game tutorial can describe everything in a matter of mere minutes, but in practice it is difficult. The learning curve for survivors in particular is a bit intense, and it’s unlikely that most will even escape in their first ten games, if not fifteen. But that’s where the next section comes into play.

This is what sells the game. The premise isn’t groundbreaking in itself, and asymmetrical games have come out previously such as Evolve. The real thing that sets Dead by Daylight apart is how faithfully it can recreate some of the tropes and feelings that slasher films invoke. From the dark woods and fog to the inhuman, near-impossible escape killers to the largely nebulous lore (some concepts I’ve shared are implied and the Entity itself is not seen except for its spider-like limbs) it screams awesome. The first game, hiding in the bushes, not knowing the area, not knowing the killer or where he was at was amazing. It’s rare for a game that doesn’t rely on jumpscares to make me afraid lately, and I was hooked. Even when I didn’t survive the previous game, the thrill of not knowing if I would make it kept me playing. And the killer was always something to fear and flee from.

I’ve seldom played the killer role myself above a dozen times, but not because it’s unfun; I just don’t get the same experience as I want being one. I like barely scraping by and being afraid. I like having to explore dark, dangerous areas without a degree of certainty. It’s something Dead by Daylight sells that I haven’t gotten elsewhere. Possibly the new Friday the 13th will offer something similar, but only time will tell.

I’ll keep this in list format for ease of reading:

Yes, as much as I’ve gushed, even I must admit the game has opportunities:

In summation, Dead by Daylight is a great horror game, with a really strong focus on the experience. It’s easy to pick up and hard to put down. Some issues remain even two months past launch (which is sadly a staple of most PC games these days) but patches come regularly and already the first free DLC has been released along with a new survivor and map. There’s a lot of potential for more experiences, but the game in general can be competitive, which may sideline the horror aspect for those who become invested based solely on winning or losing. Lastly, as of this writing there is an ongoing issue with the game search function for Survive With Friends (SWF) feature; the developers have already announced that they have a replacement feature completed and are doing testing, so hopefully those who partake with friends will have an easier time than we did at launch.

But don’t take my word for it. Watch this trailer and then decide for yourself: