"Los Angeles, California, the place where dreams are made; for some anyway." 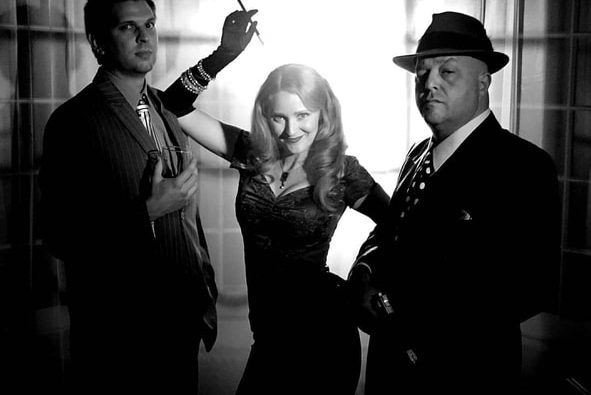 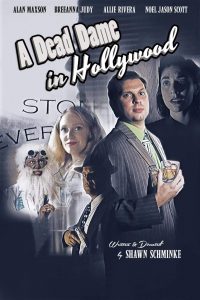 Even though my personal Golden Age of Hollywood would be the 1960’s and 1970’s, I love old Black & White, my favorites being The Twilight Zone, everything Alfred Hitchcock, and most any celluloid considered Film Noir. As a photographer, I appreciate the classic and timeless look of Black & White. By eliminating distractions, the shadows tell a story of their own and I feel the format adds to the emotional quality of any film or photograph.

In writer/director Shawn Schminke’s new film, A Dead Dame in Hollywood, we meet Stone Evergreen, (Alan Maxson) a down-and-out private detective trying to redeem himself by solving the murder of a beautiful young starlet. Sam Spade himself would have been proud of the lengths this gumshoe would go to catch the killer. 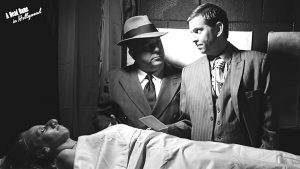 Using pretty much every trope available to bring his characters to life on a very low budget, Schminke has created an entertaining and funny film noir parody in the style of gems like The Maltese Falcon and Sunset Blvd. Some may say that using Black & White cinematography is old fashioned since we have color film, but shows like The Twilight Zone are making a resurgence, and is there anyone who doesn’t love the Mel Brooks comedy Young Frankenstein? I thought not. Case closed. 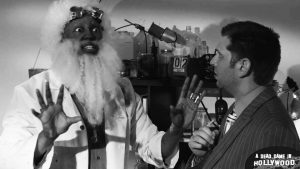 A Dead Dame in Hollywood is a delightful satire, filled to the brim with throwaway gags, dirty jokes, and one-liners, that sound like they are plucked right out of the 1940s. Evergreen’s voiceover made the film for me. Maxson has the perfect timber for a P.I. and I rooted for him to find justice in a corrupt town like Hollywood. 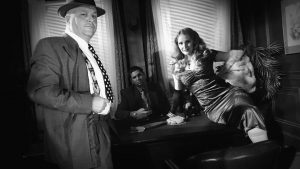 All around our world-weary sleuth with the campy banter, is a cast of characters that compliment him perfectly. For a guy who can’t seem to catch a break, he at least has some interesting folks around him. The corrupt plastic surgeon, Dr. Weinerworth, (Tim McCord) actress Candace Loring (Breeanna Judy) who isn’t even close to being who he thinks she is, photographer and sidekick Evelynn, (Allie Rivera) mad scientist Mr. Doctor, (Evan Mack) Police Chief Redfern played by Noel Jason Scott and so many more. All of these compelling and well-written people made this film work.

The Golden Age of Hollywood will never be the same. A Dead Dame in Hollywood is a humorous and stylish comedy that made me laugh, and I was able to overlook any budget limitations because I simply enjoyed the film! I am always ready for a crime thriller that can make me nostalgic about the great B&W film noirs. Cynical heroes, stark lighting, and a truly surprising femme fatale, this whodunnit has it all.

Wondering where to watch it? You can find A Dead Dame in Hollywood on Amazon Prime.

For more info, you can check out the film’s official Facebook Page