DEAD NATION – A fun game for a fair price.

It's been more than a year since the outbreak, it took from me everyone I loved 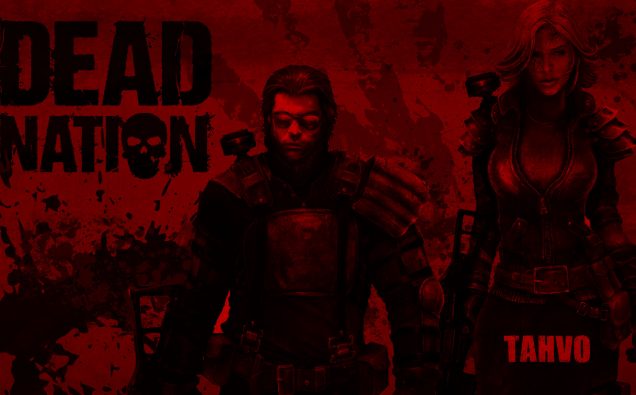 There is something to be said about the “Zombie Apocalypse’ genre of horror, since the first concept of the Zombie debuted in The Magic Island, a book written by William Seabrook in 1929, it has blown up into our world in all forms of media from comic books and television to movies and video games.  One thing that seems to be common place is how unthreatening a single zombie is.  Their horror and threat is in their numbers.  Even still a horde of slow-moving rotting corpses lacks the challenges and threat levels of our ever advancing society and technology so naturally we as a species keep upping the ante, whether by making them abominations, hybrids, or just determining that “Hey, we could make them run.”  The modern-day Zombie is far more formidable than their Voodoo origin counterparts.  That being said, let’s play a little game. 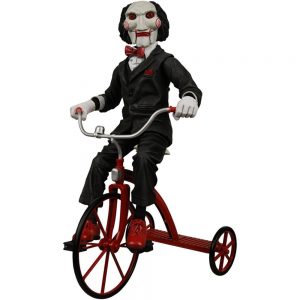 Dead Nation is a decent top-down shooter that you can get for a good price, at $7.99 it’s a steal.  Unfortunately for anyone who doesn’t own a Playstation, you’re going to have to miss out on this one as it is a Playstation exclusive. Still for those of you who do, it’s a cheaper option to get than the new release games that have no story line and depend on multiplayer to round out the content. 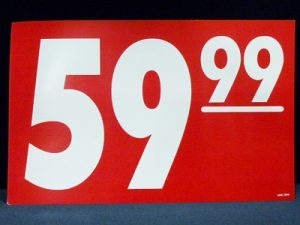 Remember when this bought you more than just multiplayer?

Dead Nation is reminiscent of older games with the same playing style, you and a friend can enter a crusade to escape a dying city, or you can go solo if you want.  Either way the experience is one of sweaty palms and quick thinking.  When I first picked this game up, I was immediately reminded of the video game adaptation of Hunter the reckoning, for those who don’t know what that is, both the tabletop and video game are excellent to play through, players are thrown into the chaos of undead hordes using their wits and skill to be victorious. 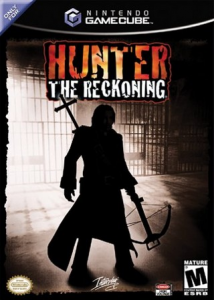 In Dead Nation you can play as one of two characters, a Male character known as Jack McReady or a female character known as Scarlett Blake, they have equal stats so the choice is purely aesthetic, when in multiplayer both characters are used.  Your initial motivation is a lack of supplies and the ever-growing horde is getting closer.  So naturally you resolve to get “Out of dodge” as it were.  The game goes through the motions of teaching you the basics and then pretty much leaves you to your fate, which is nice because spending hours on a tutorial is the last thing someone wants when trying to immerse themselves into a game. 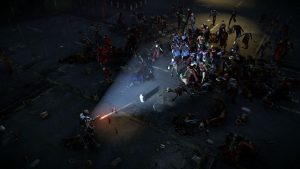 The gritty appeal of the darkened city is definitely a nice touch, burned out cars, boarded up windows, burning buildings and dumpsters full of corpses really hit home the blood bath that had befallen the now desolate metropolis.  As you, the player progresses through the game, the levels continue to bring out the back story nobody is telling.  The attention to detail is impressive given the over all price of the game.  When you wade through a pile of corpses, you’re treated to wet squashing sounds, when zombies die they release a small spatter of gore, a dark and quiet street may be accompanied by the sound of a can being kicked or rolling around.  The game stresses the sheer amount of alone the player is in by exaggerating the slightest sounds, should you bump into a dumpster, it’s going to respond with an echoing thud.  The atmosphere is as bleak as it is beautiful, not beautiful in such a way as one might say a majestic river might be but more in a “Beautiful disaster” sense.  One of the little interesting things about this game are the angles, if you’re standing near a burning building, it might start raining down zombies on fire, if you’re on a roof top, you might see zombies roaming around the streets below, and should you drop a grenade down there they will go after it.  The game gives a sense that with or without you the npc zombies are going to go about their day mulling around in the streets and alley ways.

“Do you think the zombies get bored?”

Throughout each level there are hidden caches of supplies, money, and armor.  Should you be lucky enough to find them it makes the game slightly easier to survive in.  A nice touch to the game is the weapons and armor system, players earn money by finding treasure or killing zombies which they can use to upgrade their weapons.  Armor cannot be purchased, only found but once found the player will have access to the armor in later replays without having to relocate it.  Sadly this is not the case for weapons, as they start out at base level with every new game.  The weapons and armor system allow for a customized experience, giving you the choice of which weapons to buy or upgrade, the armor focuses on your character’s stats, such as speed, strength, and endurance.  As long as you can find the various armor pieces you can build your character to be balanced or extremely good in one or two areas, the choice is up to you.

When you beat a level, which acts as its own chapter you are rated.  Your ending score is based on several things, your combat multiplayer, how many zombies you kill, how fast you beat the level, if you died or not and how much treasure you find.  This score is important because, while the internet is not needed to play Dead Nation, if you are online while playing  it will take your level scores and combine them with all the scores from all the other players from your country.  It then will show you a list of countries and their overall zombie killing scores.  So even when playing alone, it’s like playing with everyone else in your homeland. 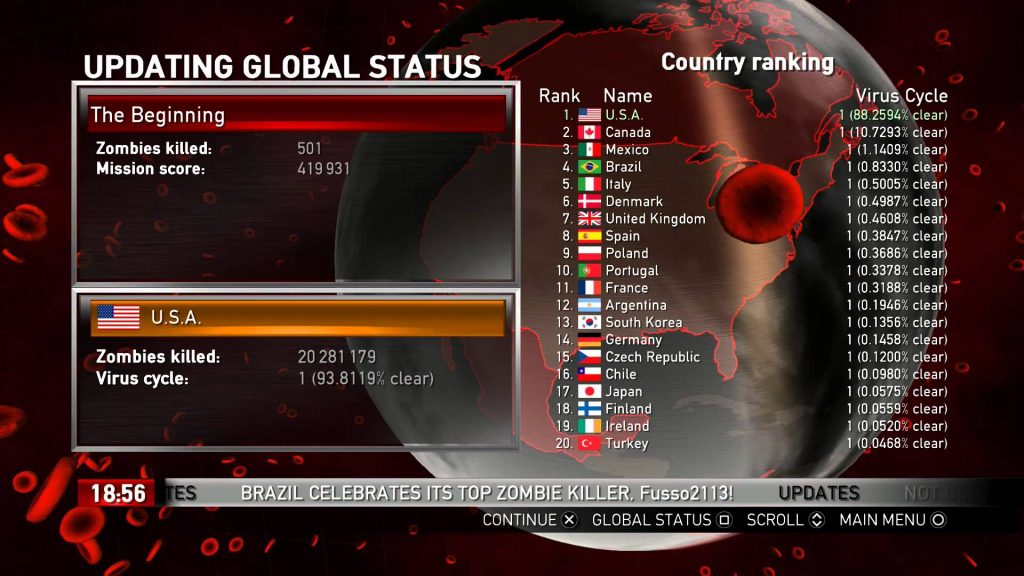 This over all ranking system, coupled by the fun of mowing down the walking dead by the hundreds are just a few reasons to want to replay this game until your thumbs bleed.  Dead nation has been around since 2010, and yet I still find myself able to fire it up and have a good time doing it.  As I mentioned earlier, slow-moving zombies just aren’t that much of a threat even in large groups.  Dead Nation answers this issue with its own spin on “Special” zombies, some are just tanks with blades for hands, others are giant obese nightmares that explode when they get into proximity of your character, and others still have all sorts of nifty tricks. 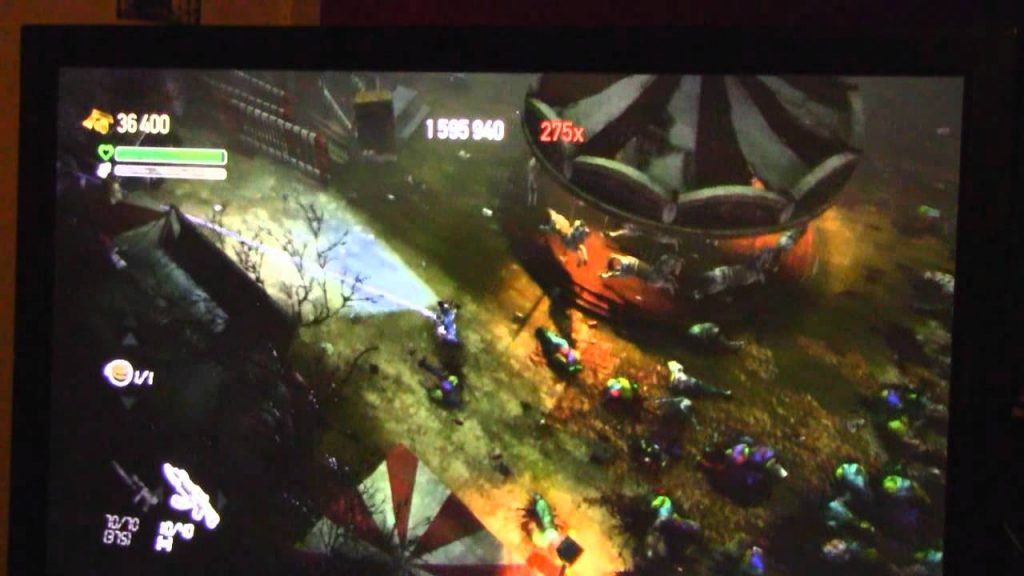 Of course there are zombie clowns!

If all of this hasn’t convinced you that this game is worth every penny, allow me to introduce a few weapons you can get that are totally amazing.  For starters the default rifle never runs out of ammo, you still have to reload but at least you have infinite bullets.  The next perk of a weapon is the Blade Cannon, which is exactly what it sounds like, a massive cannon that launches large lawnmower style blades that not only destroy most if not everything in its path, the blades will ricochet off of walls.  Next is the Shocker, it is the answer to the question “What if a Sith lord were dealing with a zombie infestation?”  Sure nobody asked that question but Dead Nation answered it anyways.  The Shocker allows the player to shoot a beam of electricity into a mob of zombies, who we all know make great conductors.  Once the beam hits a target, it will spiderweb out into a sort of chain lightning, popping the heads of any zombies caught in the stream. 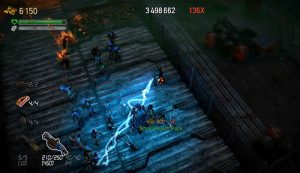 “Good, good. Let the hate flow through you“

If the standalone game isn’t enough to satisfy you, then you might want to flex your wallet for four dollars more and pick up the expansion.  Dead Nation Road of Devastation, features a gauntlet-like experience with looping areas that never end.  You and a friend can run the gauntlet and see how long you can survive, or like the initial game, you can run it alone.  This expansion offers two types of challenges, one where if you die, that’s all she wrote, and the other which will let you keep going but has penalties for dying.  It also features a new weapon, which I’m not going to tell you about, because that would just ruin the surprise.  Between the actual gameplay, captivating landscapes, terrific soundtrack and decent cut scenes to go along with the story, this game is definitely one I would recommend to both the zombie lovers, and arcade fans alike.