"Fear is the Best Medicine" 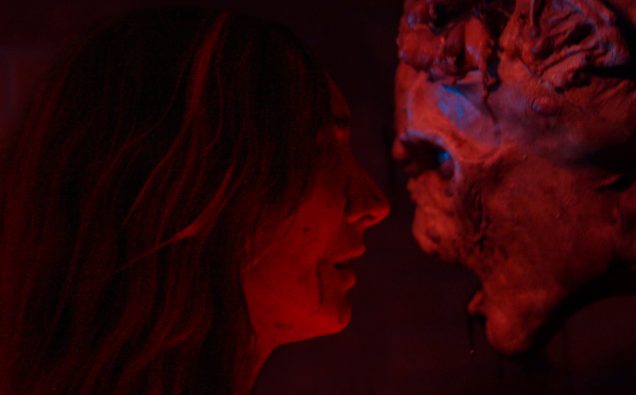 The story of making DEIMOSIMINE from LC Films is one for the books. After many delays, recasting of lead actress with only seven days left of shooting, and disagreements on creature designs, Deimosimine is finally well on it’s way to completion. LC Films has released new stills and a two minute trailer featuring some new and re-shot footage. Deimosimine is scheduled for a late 2017 release date on major VOD and retail BluRay/DVD while crowd funding contributors and pre-orders that were taken to help fund the film will be shipping much sooner. With the re-casting of the lead actress so late in principle photography it has caused costly re-shoots, delays, but at the same time will, in the long run, make the film “even better”. Here’s what director Chad Armstrong had to say.

“While it is unfortunate we lost a great lead actress so late in production, which is not fault of anyone’s, which caused major delays, re-scheduling, and expensive re-shoots, we looked at this as an opportunity to take some of what we have already shot, and do it better than the first time around. This will enhance the visuals with more gore that will be pushing all the kills scene’s to a new, gorier level.

We are still not out of the woods, these FX and creatures costs a lot of money the first time around and to re-do them we have to double down. We are currently seeking a mini-investor which we can guarantee to double their investment within 18 months after the release of the film, we also have a new crowdfunding site up to raise money for the re-shoots and to get the out-of-state actors back in town to re-shoot these key scenes. These two actors bring so much to the film that we can not re-cast them.”

Your Zombie Girl has been keeping an eye on this film for quite a while and looks forward to it being finished. I just joined the Deimosimine Addicts Facebook page and loved the “not so appropriate” update from Chad. He personally addressed 6 burning questions from investors of the upcoming horror flick. (Or maybe he wrote them himself?) In any case enjoy.

Question 2: Did you give up?
Chad: “No fucking way. I have personally (along with many other cast and crew) have been working EVERY day on the film in one aspect or another. We will never give up, this is a dream project and a startup venture for many films to come.”

Question 3: Did I waste my money and get ripped off never to see my BluRay or perks?

Chad: “Absolutely not! Our campaign called for at least 20k and got under 7k with fees taken from indiegogo and PayPal. That left us with over 13k more to raise outside of crowdfunding which is no easy task with multiple practical FX creatures, but we continued to shoot as we continued to raise money, which took time, lots of time. Not to mention we had two FX artist we paid a majority of that money to and failed to deliver what was needed, so that money went with no return to help on the film. Sure we could have shot the film in a month in someone’s backyard with people dressed in trash bags and latex and made a piece of shit movie to satisfy the delivery of the perks, but the film would have been shit that no contributor, or us, would have been proud of.”

Question 4: Are you guys a bunch of assholes?

Chad: “I can be an asshole, but not the type that’s going to rip people off. Again contributor’s put in 7k, we (LC Films) have put in about 23k in the film so we are in deeper than any BluRay contribution and with that much invested we can not stop at this point.”

Question 5: Are you following the new trend of assholes who have campaigns that get money and never produce a film and steal our hard earned cash?

Chad: “No, we are starting a new trend by taking the time needed to make the film we want to make, not to mention reimbursing everyone who contributed to the campaign and pre-orders to the production. Which means if you purchased a BluRay for $24 you will get the BluRay when the film is completed and as the film brings in revenue from our discs and major VOD sales we will begin to pay back each contributor until all are reimbursed. That, to our knowledge, is a first. Making all contributors “mini investors” in the film.”

Question 6: When the fuck is the film coming out?

Chad: “Besides the set back early on with the creature funds we also had to recast our leading lady when we only had 7 days of shooting left due to health reasons, which again, caused costly reshoots of a majority of the film and a delay to recast a few roles. Money and talent’s health is something we can’t control and we are not going to pressure someone to stay aboard as their health gets worse. All we can do is deal with it as professionals and work our asses off to keep things moving. I personally have been working 18 hour days between the production and running LC Films. So to bluntly answer this question we are really pushing for a May/June release date for contributors with a retail release date a month or two afterwards. With this being said, after losing a ton of money with having to reshoot, we will be doing a FINISHING FUNDS campaign. It’s only for 5k to get out of state actors back and to reshoot some of the FX scenes with the new actress.”

Final Note from Chad: “In closing please bear with us, we owe each and everyone of you the greatest gratitude for believing in Deimosimine and supporting the film. All the footage looks amazing and we are just as anxious as you to get the film finished up. We have a very important incentive to get the film finished as we want to shoot our next feature (Blood Dancers 2: Full Moon) after Deimosimine wraps and we are working to make it the best film possible to attract investors and to avoid crowd funding as crowd funding is almost more work than shooting the film itself and is an enormous pressure to try and make everyone happy, and sometimes that hurts the overall film when you are working to satisfy perks that were promised by a certain date but because of situations beyond the productions control things are delayed and people get upset and rightly so, especially with what is going on with crowd funding these days.” 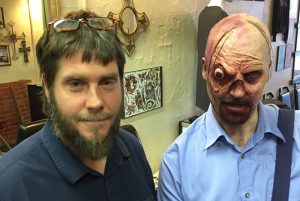 Director Chad Armstrong with his creature 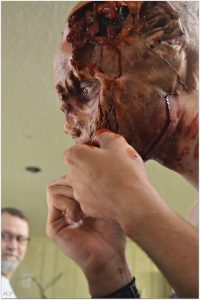 “Keep an eye at Deimosiminefilm.com as we will be posting updates regularly again as we have been shooting the last several weeks and are returning to set this Sunday and every week until we wrap production. So a lot of fun videos, stills, and goofiness will be publicly posted for all you to see. The Deimosimine Facebook is now Jollytymefilm, as it’s the name of the doughnut shop in the film, so like the page as well. And as one of the perks on contributing you were granted access to this closed group so we will once again be doing a lot of updates during shoots and random updates on what’s happening.”

If you are interested in becoming a mini-investor contact chadarmstrong@LCFilmsOnline.com or if you want to pre-order the limited edition BluRay or DVD that wont be available anywhere else and to see it before anyone else, head on over to www.funding.deimosiminefilm.com.