‘Dementer’ (2019) Check It Out On VOD from Dark Star Pictures 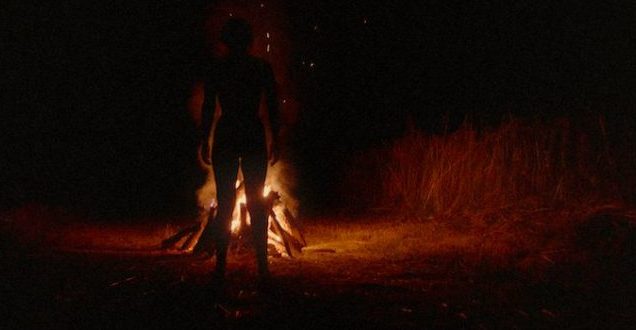 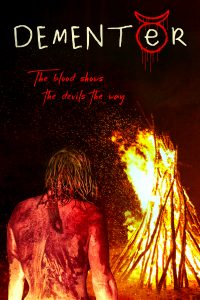 A cult is a hard thing to define and we see them used a lot in horror films. If a religious group uses abuse, has overly authoritarian religious leaders, and cuts their devotees off from the rest of the world, this kind of group is considered a cult. The word conjures up some horrible things historically. Groups like the People’s Temple led by Jim Jones, the Manson family, or the Branch Davidians led by David Koresh, make us shiver to even think of what horrors these folks went through.  Fear of the Devil is used in many to control and isolate the people that at first willingly join the fold, to then discover they sadly, are trapped. Why do some stay in the madness by choice, while others run?

Escaping these kinds of cults is especially tricky. They have given everything they own to the group, they have been brainwashed, and to defect means leaving families they love behind, just to get free. But the problem is, once they do that, are they ever safe? Have they truly gotten out, or is the cult part of their soul forever?

Synopsis: Katie, a young woman determined to do something positive with her life after fleeing from a backwoods cult, takes a job at a center for special needs adults. 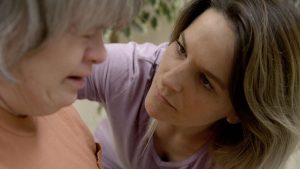 Dementer, by writer/director Chad Crawford Kinkle has such an authentic feel to it, mostly because of Kinkle’s personal experience with people with disabilities, including his sister, who appears in the film. It takes a unique look at a cult escapee, who seems at first to just want a normal life.

Katie (Katie Groshong) has escaped from a religious cult hidden away in the backwoods of Tennessee. She finds a job working as a staff member at a group home for disabled adults. We see from the very beginning that she is haunted by the memories of her time in the cult. Unsettling flashbacks dominate the film and take us through disturbing scenes of her past life. While working with her disabled clients, Katie meets a Down Syndrome woman named Stephanie (Stephanie Kinkle) and immediately feels that she is being possessed by a demon and needs her help. Using diagrams in a journal and some very radical occult rituals involving cow hearts and a cat, Katie starts the process to “protect” Stephanie after she begins to get very sick.

But can anyone really leave a cult completely? Katie’s back is covered with satanic symbols that were branded into her. That had to be very traumatic. We never really know how she came to be in the cult, just that it was led by a guy named Larry. (Larry Fessenden) As Katie hears his voice whispering in her head and has flashbacks of blood-covered floors and running naked in the woods away from a bonfire, it becomes clear that she may not be who she says she is. She has a very dark, complicated, and traumatic past.

What I thought was interesting is that the film mostly uses a non-professional cast from the group home, who go about living their day-to-day lives. Groshong and the always creepy Larry Fessenden are our main “actors” alongside an awesome performance by Kinkle’s sister Stephanie. Katie Groshong did a fantastic job, matching her acting next to the real folks; she was not over the top different from them. Her acting was perfect for her character in this micro-budget film. 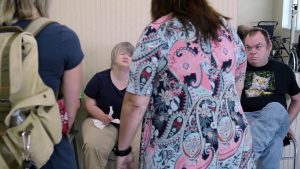 I wish I could say I had a complete understanding of the premise of the story.

On one hand, Katie is a sad, confused victim who physically got out of a cult, and on the other, she seems a monster. Is she brainwashed? What is she really there for? Which way is it? Well, I leave that up to you to decide when you watch it.

I liked Dementer, despite my confusion about Katie’s true motives. The use of real-life people for the cast and the eerie flashbacks leave a lot to be deciphered. It is a strange and atmospheric mystery to be unwoven. Enjoy!

“A year ago, my mother mentioned that she had a dream that I made a film with my sister Stephanie, who has Down Syndrome. I don’t think that I told her, but for a few years now I’ve had the idea of building a horror film around my sister. Back in the late ’90s, I was in film school and even then, the idea of making a film with my sister would enter my mind. But what would I do? A documentary? And why would I do it? To make people feel sorry for her? While my sister is “special,” the events in her life haven’t been such that would warrant a film, particularly a feature film.

After watching THE TRIBE, a film set in a school for deaf teens, I slowly changed my mind. What if I did make a film with my sister in the unique environment that she lives in and what if it was a horror film? What would that even look like? I didn’t know, but I felt the idea had something to it.

At first, it was more of a documentary-style horror film with my sister as the main subject but that quickly turned into a story that would focus on another character that would come into my sister’s world. This made sense since I would be shooting the film on a tight fourteen-day schedule. Because my sister is not a high-functioning person with Downs, which is normally portrayed in movies and television, I needed another character for the audience to follow.

I knew that no matter what was in the script, the approach would be more like shooting an intimate documentary with only a few takes. I would be trying to capture as much as I would be trying to create. I needed a small cast and crew that I had one hundred percent trust in for practical and personal reasons. This led me to be the sole camera operator since I was familiar with the locations, which were in my hometown, and the other special needs adults.

After the film had been shot, I ended up being the editor as well. Not that someone else couldn’t do it, it was just that the footage and vision of the film were too specific and personal to properly explain. The resulting film is something that I’ve never seen before. While certainly a horror film, it needed another description like; experimental, abstract, dream-like, nightmarish, or even art house.  What seemed best is that it is more of a dark poem since much of the script was written on intuition and not traditional story logic.”

“In the end, my hope is that DEMENTER will be remembered as a unique horror film, created under equally unique circumstances.”