Digging Up The Marrow (My First Review)

Sharing the first (unpublished) review I made for the site! 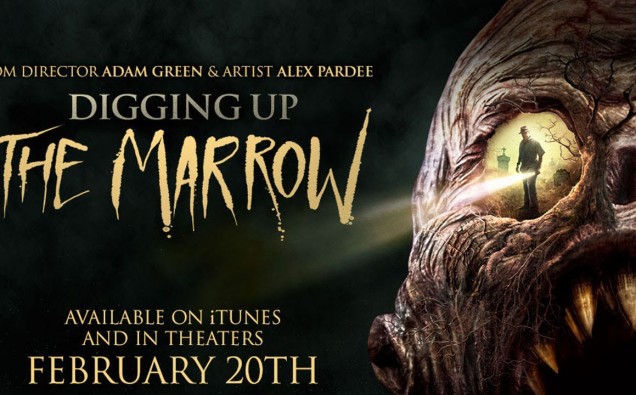 Before I became a writer for the Blood Shed, I had to write a sample review in order to be considered. I always wanted to share it, & thought now would be as good a time as any. Enjoy!

Digging Up The Marrow

When I first heard about Digging Up The Marrow, I was pretty excited. I’m a huge fan of director Adam Green’s Hatchet franchise, & after viewing the trailer, it looked very promising. It really didn’t help how much it was being hyped up. I believe it was said that people “were jumping out of their seats”, & “it was scared the people who first saw it”, or “hey, isn’t this a lower budgeted version of Nightbreed”. Something along those lines, I assure. Finally, a week after I first heard about it (I was late to the game, I’m afraid), it came out & I was able to watch this moderately anticipated movie…and it was alright.

Before I get into the flesh & bones of this review, allow me to describe the picture this film is attempting to paint. The idea is that director Adam Green was contacted by a former detective named William Dekker (played by Ray Wise) who claims that monsters are real. Turns out, monsters live underground in a metropolis connected by caves & tunnels, only coming out to the surface at night to…do things, I guess. They never really say. Dekker mentioned that one of them might have killed someone & that they might go to Ihop for pancakes (“Everyone likes pancakes”), but that’s about it. Anyway, Green & his cameraman (Will Barratt) decide to interview Dekker & see if there’s any truth to his story. From that point, Dekker leads his two interviewers into a cemetery where an “opening” to the monsters’ underground home is supposed to be, & then everything goes downhill for them from there.

With a premise like that, it’s easy to see how this could be a really good flick. There’s plenty of directions to go, ideas to use, scares to be had; it could’ve been great. But I also could’ve studied for that one exam for that one class last week. Did I pass? Barely. Does this movie utilize the story’s full potential? No. Like many “found footage” films from before, it follows all the same steps in all the same places without bring anything new to the game. I’m not saying you need to bring something fresh to make a fun movie, but in this case it would’ve helped.

It seems Adam Green’s big problem is that he bit off more than he can chew budget wise. Throughout the movie, we’re giving glimpses of what the monsters could possibly look like through really well done pieces of artwork (drawn by artist Alex Pardee). Dekker tells stories about his experiences watching these monsters unnoticed, describing how some of them act or look like, really giving it an eerie vibe through words alone. It gets you excited to see what these monsters can do, what they’ll be like when they finally grace the screen. The payoff? About five minutes of a shaky “camera view” with maybe one or two good looks at “a” monster. Yeah, it’s as underwhelming as it sounds. Again, I believe the budget wasn’t big enough to actually show the monsters they were hyping up. If they just focused on one monster or were vaguer with their descriptions, their approach might have worked, but in the finished product, it just made you feel cheated (for lack of a better word).

As far as acting goes, Ray Wise was a real treat, but that’s always the case. He portrayed Dekker with the right amount of mystery & creepiness that it was always a fun show when he was on screen. Adam Green did a decent job playing himself (surprising, right?), as well as Will Barratt & the rest of his company. Everything felt pretty believable, so there are not too many complaints to be given.

The effects on the monsters that you do see range from okay to just bad. At one point, a little monster runs past the characters feet, & it just looks like a doll on a wire. Another point, a monster know for wearing a huge sack with a face over the top half of its body looks VERY unnerving & scary…until it takes the sack off to reveal a generic looking monster with what appears to be CGI tacked on to it. I could be wrong, it was a pretty dark shot, but I’m 95% sure that it was. And, as I said before, all this is just about five minutes of the movie. Woo hoo.

Now to talk about the cinematography…it’s a found footage film with all the popular found footage camera shots. You know, like “What was that?!” then the camera shakes from right to left for a bit to reveal nothing we can see. That’s about it.

Overall, despite all that I said, this is not a “bad” film. I have seen worse movies of this type, & Digging Up The Marrow is way (& I mean waaaaayyyyy) better than those. It’s just that I had high expectations for this film. I thought I was going to see way more monsters & a lot more scares, & was left somewhat disappointed. Perhaps if I had lowered expectations, I would’ve had a higher opinion on the film. Give it a watch if you must, but don’t feel bad if you don’t.