There’s always plenty of films to watch each summer, and while it’s usually dominated by big action, adventure and superheroes, horror fans aren’t always left out. Case in point,... 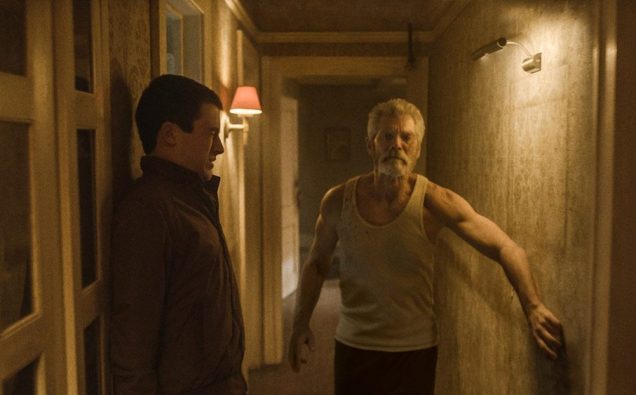 There’s always plenty of films to watch each summer, and while it’s usually dominated by big action, adventure and superheroes, horror fans aren’t always left out. Case in point, Don’t Breathe, the upcoming horror thriller by Fede Alvarez. Releasing August 26th, the story sees teen Rocky wanting to escape her abusive home with her younger sister, but to do so they’ll need money. Teaming up with some of her friends, they set to rob the home of an old blind man. Thinking they can easily walk away with his recent lottery winnings, they soon find it won’t be as simple as they think…

The film was screened at the South by Southwest film festival in March and garnered early positive reviews. This is Alvarez’s second outing as writer and director, fowling the 2013 remake of Evil Dead, with episodes of From Dusk till Dawn: The Series also under his belt. Jane Levy, who also starred in Evil Dead, plays Rocky. Dylan Minette was last seen in Goosebumps and Daniel Zovatto keeps his horror movie streak, with them appearing as Rocky’s friends Alex and Money respectively. Stephen Lang, best known for his role in Avatar as Col. Miles Quaritch, stars as The Blind Man.

Originally titled The Man in the Dark, the film was mostly shot in Hungary, though is set entirely in Detroit. Horror legend Sam Raimi serves as the film’s producer. Alvarez felt that “Isolation” was a key element to the film. He described the Blind Man as “an isolated guy in the neighbourhood.” He commentated that Lang is “a very nice guy, but he’s also very intimidating. I genuinely find myself scared in some of the scenes.” When talking about the house, Alvarez said “[it’s] old and strong, and gives off the notion it is not to be fucked with.” adding, “People have left. Everything is falling into disrepair…it’s a metaphor for [The Blind Man’s] own state of being.”

While you will be waiting a few weeks for Don’t Breathe to be released, you can find plenty of horror entertainment to keep you busy. Video game Inside launched for PS4, Xbox One and PC recently and is a gripping puzzle platformer, that excels at building tension and fear. You can even find some horror themed fun with Lucky Nugget Casino and their movie slots, covering such franchises as The Nightmare on Elm Street and Psycho. David F. Sandberg’s supernatural horror Lights Out just opened, starring Teresa Palmer and Gabriel Bateman, and has been gaining positive reviews. Stranger Things just debuted on Netflix and follows Winona Ryder as a single mother searching for her lost child who enters strange world of supernatural horror.