Don’t Breathe- A tense nightmare that never lets up 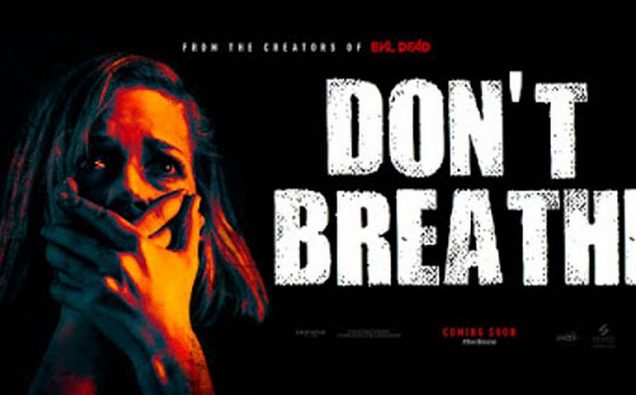 Don’t Breathe by director Fede Alvarez is hands down the best mainstream horror movie so far this year, and probably the best of the last few years. It begins with a young girl named Rocky and her two male friends. They live in the slums of Detroit and rob houses in the hopes of getting enough money to move to California and a better life. Rocky in particular has had a rough childhood. After her father left, her mother would blame her and lock her in the trunk of a car for hours. She dreams of taking her kid sister away with her to start over. Rocky and her friends discover that a blind war veteran recluse is sitting on tons of settlement money after his daughter was killed in a hit and run. They swear this will be the last break in they will ever do as they will have all the money they need. It might very well be the last break in of their lives for a different reason though. You see the blind man is a deranged psycho intent on making them pay. 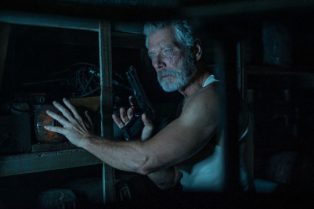 This movie starts quickly and never has a dull moment. After a brief character setup they break into the blind man’s house and the terror begins. The film doesn’t rely heavily on jump scares, rather ratcheting up the tension with each amazing scene. After showing he means business, the blind man chases them all throughout the darkened home with intense action and shocking displays of brutality. Beatings, shootings, strangulations; this film has it all. There is one particularly disturbing scene involving a turkey baster filled with cum. The beautiful thing about Don’t Breathe, however, is it doesn’t rely solely on violence for violence’s sake. The intense buildup to the violent moments is actually even better then the money shots. There is also a vicious dog set loose on them, which was particularly traumatizing for me since I’ve always been intimidated by large dogs. 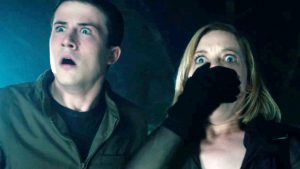 Don’t Breathe has a somewhat happy ending but with a twist. Normally I hate happy endings but in this case, after the trauma the audience has been through, I think the film earns its ending. I won’t spoil anything, but it sets itself up for a sequel without taking anything away from the movie. After the beautifully twisted nightmare of Don’t Breathe I wouldn’t mind a sequel, or any other film by Fede Alvarez for that matter. I’ve reviewed a number of films for the Blood Shed in the past, and even the best have fallen short of a perfect score. This time I’m doing something I’ve never done before. I’m awarding Don’t Breathe a perfect 5 out of 5 knives. The film is that good. So what are you waiting for. Get out to your local theater and prepare to be scared!