A.K.A That Asshole Frieza is Back With a Vengance 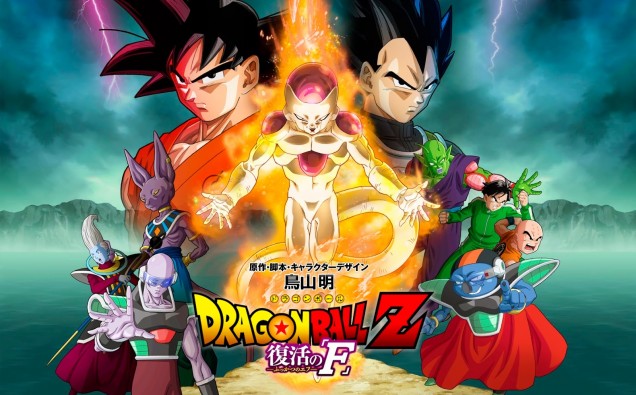 Resurrection of F might just be the perfect Dragon Ball film. A love letter to every boy who grew up watching DBZ on Toonami, this has everything a fan could ask for. Awesome battles, new forms, the return of the franchises most iconic villain, the goofy humor the series is known for; as a Dragon Ball Z product, it’s very nearly flawless.

That being said, If I hadn’t spent the better part of my youth binge watching the anime and desperately wishing I could rock a haircut as cool as a level 3 Super Saiyan, would I have enjoyed the Resurrection of F as much? Probably not. But anyone who has ever dreamed of throwing a kamehameha of their own owes it to themself to go out and watch this movie right now.

The film starts off by, appropriately enough, by showing us how former world destroying tyrant Frieza has been spending his time. After being sliced to pieces years earlier, his soul has been trapped in Hell, tormented day and night by… fluffy little teddy bears playing adorable tiny little instruments. Not the worst way to endure eternity as far as damnations go, but for the evil Frieza its akin to torture.

Thankfully for him (and un-thankfully for all of Earth) his minions manage to get ahold of the Dragon Balls (magical orbs with wish granting properties) and bring him back to life stronger than ever.Still pissed off about getting his ass handed to him years earlier, a more powerful than ever Frieza invades our planet with one goal… kill everything! Only Goku, Vegeta, and the other Z-Fighters are left to stand in his way.

If you’ve gotten this far into the review, you’ve probably already deciphered that Resurrection F  isn’t the most beginner friendly of films. Dragon Ball Z alone has 293 episodes, and a good portion of those are pretty much required viewing if you want to understand what the hell is going on. That being said, Dragon Ball isn’t a franchise well known for its logical continuity (you’d have to take off your shoes to count the number of times Goku’s died and been resurrected.) With the power of the internet (and the help of Dragon Ball Wiki) you should be able to adequately prepare yourself with minimal effort.

Now, as any fan would tell you, there are 2 essential elements to a good Dragon Ball story arch; Badass battles and an awesome villain for Goku to Spirit Bomb the shit out of. The lack of either of these makes for a piss poor story arch (*cough Baby Saga cough*) and a generally disappointing time. Thankfully Resurrection F hits it out of the ballpark twice, with some awesome fights, courtesy of the increased budget a feature film allows, and the return of Frieza, one of the best villains ever put to screen, animated or not.

What makes Frieza so fantastic isn’t his subtle nuances or his complexity as a character. In fact, it’s the exact opposite. The dudes flamboyant, comically over the top, and to be honest, a little ridiculous looking. It can be difficult to seemlike a hardass when you look like a roided out Barney the dinosaur in a gold morph suit. 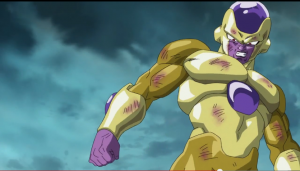 (I love you, you love me, I killed your entire species.)

But that’s why Frieza is so freaking good.  Despite his eccentricities, he’s a damn terrifying villain. The guys single handily blown up entire planets, kills his entire crew without a second thought, and has the power to go toe to toe with a Super Saiyan God, cackling all the while.  He may look stupid, but this is the guy that wiped out Goku’s entire race so he’s certainly no chump. Being beaten by a guy who looks like a badass might be hard to accept, but getting your butt handed to you by a guy who looks like he belongs in a Lady Gaga video is just plain embarrassing.

Adding to the list of returning great characters is the alien Whis, the single most powerful entity shown in Dragon Ball to this date all while looking like a smurf with an ice cream cone dipped on his head. 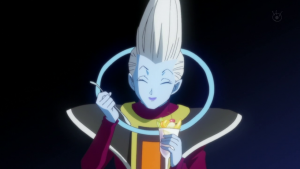 A relatively new character first introduced in Battle of The Gods Whis takes on a sort of Mr.Miyagi in Resurrection F training Goku and Vegeta to become even stronger. It’s nothing short of delightful to watch the hot headed Vegeta and dim witted Goku get their collective asses handed to them by Whis, who doesn’t even break a sweat fending the duo off. It adds some much welcomed comedy to the action heavy foray, while showing off one of the best Dragon Ball characters in recent years.

And of course, it wouldn’t be a DBZ film without plenty of drawn out fights. This is one aspect where Resurrection F’s status as a feature film really works to improve itself. While the average episode of the anime has the budget of a ham sandwich (minus the mayo), the movie has enough money to produce some truly spectacular animation. Scenes like the Z-fighters taking out more than a thousand lackeys, Frieza’s new powers blasting away entire mountains, and countless others wouldn’t have been budget-ably feasible on an episode of the show. The fact that nearly everything was done in traditional two dimensional styling, whether than CGI, just makes it that much sweeter.

If your a DBZ fan, you owe it to yourself to go see this movie. If your already on the fence about Dragon Ball or anime in general, than Ressurection F probably isn’t going to change your mind. For everyone else, wish to Shenron for a ticket, gulp down a senzu bean, and prepare for a truly great time.